Parade cancelled in Portland for fear of violence 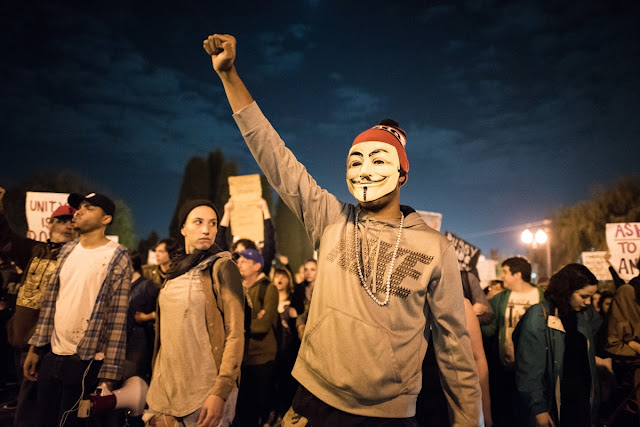 Organizers of this Saturday's 82nd Avenue of Roses Parade have canceled the event, fearing political violence.

"Following threats of violence during the Parade by multiple groups planning to disrupt the event, 82nd Avenue of Roses Business Association can no longer guarantee the safety of our community and have made the difficult decision to cancel the Parade," the association said in an email to the press. "We are deeply disappointed that the agendas of these outside groups have so regrettably impacted East Portland and the 82nd Avenue community."

KATU first reported the cancellation today following an announcement by the Oregon Republican Party, which had planned to participate in the parade until receiving threats from "anarchists." The statement from Multnomah County Republican Party chair James Buchal "calls upon the Mayor, the Police Chief, and the District Attorney to take action against this criminal conspiracy to commit crimes of riot and disorderly conduct in violation of Oregon law."

“Under former Mayor Charlie Hales,” said James Buchal, MCRP Chair, “the City allowed this cancer of lawlessness to grow to the point where its leaders are now bragging, like some sort of comic book characters, that ‘the police cannot stop us’. But this is no laughing matter. The participation of political parties in public events like the Parade is not only an American tradition, but also reflects the most fundamental constitutional rights of free speech and freedom of assembly.”
The alleged conspiracy? Someone—it's unclear who—received an anonymous email from "thegiver@riseup.net" telling parade organizers that if they allowed "Trump supporters and 3% militia" to march, "we will have two hundred or more people rush into the parade into the middle and drag and push those people out as we will not give one inch to groups who espouse hatred toward lgbt, immigrants, people of color or others."

KATU erroneously inferred that "riseup" was a protest group. It is an email provider. The email, available here, did contained links however to two Facebook event pages—one from Direct Action Alliance, the other from Oregon Students Empowered—promising to disrupt the Republican float at the parade.

You have seen how much power we have downtown and that the police cannot stop us from shutting down roads so please consider your decision wisely. Let us know your decision by tuesday by emailing back. We will also wheatpaste fliers across the march route naming sponsors and holding them accountable for backing an event with this type of rhetoric which may endanger future parades ability to get sponsors. We will also begin emailing groups who are participating in the march to inform them you are allowing a group of bigots to march in the parade.
It concluded, "We promise there will be no harm to anyone but we will shut this down and prevent them from marching using nonviolent passive blocking of their movement."

A source close to the parade tells WW that the Republicans initially wanted to cancel their participation, but changed their minds and decided to confront protesters. In subsequent discussions with the city, the source said, the Portland Police Bureau made clear that it did not have the resources to provide extra security to the parade.

It's also clear that multiple groups had planned to converge at the annual family-focused event, including far-right agitators.

One of the organizers of an April 2 "Rally for Trump and Freedom" in Vancouver, Wash., which ended in a large brawl and police arrests of several anti-fascist ("antifa") protesters, announced his plans to crash the event yesterday.

The organizer, Joey Gibson, frequently posts online videos in which he rants about "free speech" while standing in front of his firearms and an American Revolutionary War flag.

"We've got a lot more people coming down now on Saturday because of the threats you guys are making," Gibson tells his antifa foils in an April 24 video, before making a threat of his own: "Saturday can be an awesome day or a horrible day. It could turn into a Berkeley, OK? I was in Berkeley. You don't want that, trust me. Just leave us alone, don't tread on us, no one gets hurt."

Gibson's video catalog includes a clip of him scuffling with masked skateboarders at the April 15 riots in Berkeley, Calif., where neo-Nazis and antifa engaged in a daylong street brawl. Kyle Chapman, who was among the far-right fighters and became something of a hero to online nationalists, who know him as "Based Stickman"—in part because he wields a stick as a weapon at protests—threatened on video to take his show on the road.

"This is just the beginning," Chapman said. "We're going to go to every liberal city. Fucking Portland. Detroit… Boston."

Portland left-wing groups are planning their own May Day events this weekend, including a service-industry strike.

Update 5:35 pm: Jacob Bureros of the Direct Action Alliance sent the following statement to the press about the parade cancelation.

We are disappointed that the Avenue of Roses Parade has been cancelled. As members of this community, we prize our neighborhood events and support events that promote community.

Known members of neo-nazi and anti immigrant hate groups planned to attend the group that was being hosted by the Multnomah County Republicans at the parade. We intended to stand between them and those who they wanted to intimidate. We intended to block out their hate and shut down their violence.

They want to march in a family parade and normalize a man who bragged about sexually assaulting women; they want to march in our diverse community and normalize a man who wants to ban Muslims and build a wall between us and our neighbor, Mexico. They want to march as the Republican Party, but in their ranks are groups like the “Bible Believers”, who have already come to this neighborhood to intimidate a local Latinex church and who were filmed assaulting an injured activist on the ground in Berkeley last week and were also filmed attacking a woman at PDX in January.

No Portland child will see a march in support of this fascist regime go unopposed.