Japanese have 10 mins to react to N. Korean nuclear attack

Japan gets real: what to do when the 10-minute missile warning comes 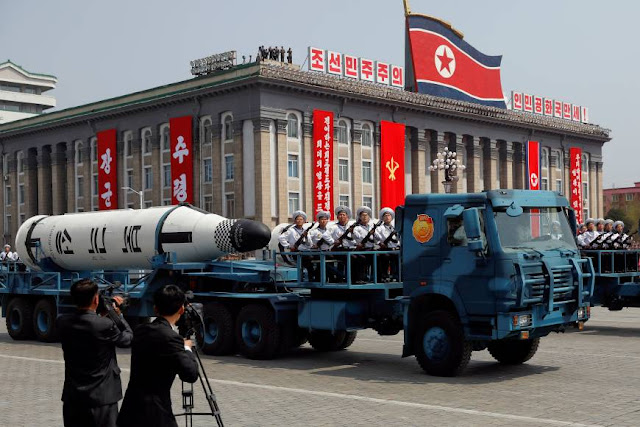 OSAKA – With fears growing that North Korea could hold a nuclear or missile test as early as Tuesday, municipalities and prefectures nationwide are responding to a government request to provide information on what to do in the event Japan is targeted.

The moves come as the Cabinet Secretariat Civil Protection Portal Site on what to do in case of a North Korean missile attack has seen a surge to about 2.6 million views this month from 450,000 in March, after beginning a gradual climb in February last year. The site offers information on how the public will be notified of an impending missile attack and what actions they should take.

But with Tokyo admitting there will likely be only about 10 minutes between the time a warning is issued and impact, those in or near the targeted area will have little time to flee to safety.

Japan has a system known as J-Alert which, under the Cabinet Secretariat, is responsible for getting the word out about an imminent missile attack. Any information will be broadcast via satellite, telephone and cyberspace to disaster management officials at the local level.

If you are outside when a warning is sounded or received, the government’s advice is to proceed calmly to the strongest concrete building you can quickly get to, or to go underground, if possible. Families in their homes are advised to stay low to the floor, take cover underneath tables and to stay away from glass windows.

At a meeting in Tokyo last week of 70 prefectural disaster and crisis officials, representatives were urged to make additional efforts to warn residents and establish their own plans. One of the first cities to respond was Osaka.

Osaka Mayor Hirofumi Yoshimura, speaking on the same day as the Tokyo meeting, announced that the city will establish a response team, led by the mayor, in the event of any North Korean missile launch, nuclear test or attack on North Korea by the United States.

The city’s website recommends that, if school is in session, pupils remain in their classrooms and get under their desks.

“The team will include officials involved in crisis management as well as schools, and will discuss whether to close schools and how to get information out to city residents.”

But Yoshimura, while explaining, as requested by the central government, how the nation will be notified of a missile attack, said that there would be almost no time to respond.

“A missile may not be detected as soon as it leaves the launch pad . . . and that could take several minutes. Depending on the case, the warnings and alarms might only sound four or five minutes before a missile arrives,” Yoshimura said.

These changes included new laws to make evacuation mandatory, we well as a nationwide system of drills to be held in cooperation with the Defense Ministry.

Last month, residents of Oga, Akita Prefecture, in cooperation with the central government and the prefecture, conducted an evacuation drill in response to a North Korean missile attack, the first to be held in the country.

Last August, a North Korean missile landed in Japan’s exclusive economic zone at a spot about 250 km west of the Oga Peninsula.

At last week’s meeting between local officials and the central government, some prefectures suggested that new laws be passed to create a nationwide system of drills based on Oga’s experience.

As tensions heat up with North Korea and the potential for a nuclear exchange becomes all the more real, residents of Japan are panic buying everything from nuclear shelters to air purifiers in preparation:

Sales of nuclear shelters and radiation-blocking air purifiers have surged in Japan in recent weeks as North Korea has pressed ahead with missile tests in defiance of U.N. Sanctions.

A small company that specializes in building nuclear shelters, generally under people’s houses, has received eight orders in April alone compared with six orders during a typical year.
The company, Oribe Seiki Seisakusho, based in Kobe, western Japan, also has sold out of 50 Swiss-made air purifiers, which are said to keep out radiation and poisonous gas, and is trying to get more, said Nobuko Oribe, the company’s director
Concerns about a possible gas attack have grown in Japan after Prime Minister Shinzo Abe told a parliament session this month that North Korea may have the capacity to deliver missiles equipped with sarin nerve gas.
‘It takes time and money to build a shelter. But all we hear these days, in this tense atmosphere, is that they want one now,’ Oribe said. ‘They ask us to come right away and give them an estimate.’
Source: The Daily Mail
As we’ve learned from previous experience, once the possibility of an actual emergency or disaster has been realized or comes to pass, it is often too late for those who failed to foresee the threat and act on it in advance.
Following the 2011 Fukushima disaster, for example, Americans concerned with the spread of radiation along the West coast were advised by the Department of Homeland Security that they could take potassium iodide supplements to reduce absorption of radioactive material. Within 24 hours just about all available stock was sold out across the world and secondary markets popped up across the internet with anti-radiation pills, normally available for about $15, selling for upwards of $200, an increase of over 1000%.
The government took notice of the shortages and stockpiled approximately 14 million doses in 2014.
But as you may have guessed, though federal and state governments have positioned emergency reserves in anticipation of any number of possible disasters, the chance that average citizens will have access to much needed crisis supplies when they need them most is almost non-existent. This was evidenced by the total lack of assistance in the initial days following Hurricane Katrina in New Orleans, as well as the lackluster response by government following Hurricane Sandy.
Keeping in mind that these were disasters isolated to a single city or small region, and that we had advance warning of the Hurricanes, according to the Department of Homeland Security it will be impossible for emergency services personnel to respond to any large-scale threat that affects multiple regions simultaneously.
The point, as we have previously warned, is that if you are going to attempt to prepare even one second after a disaster strikes, it will already be too late.