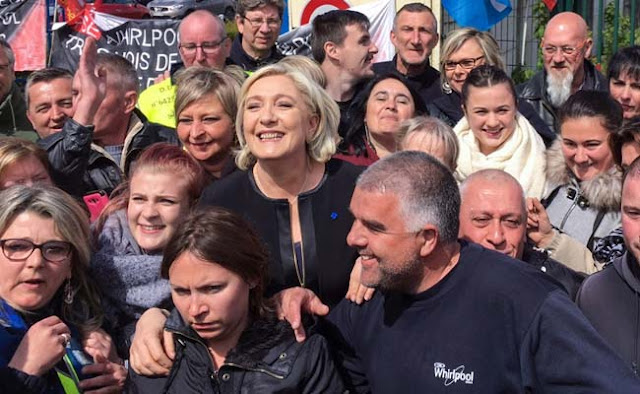 French presidential frontrunner Emmanuel Macron has been booed and heckled with chants backing his far-right rival Marine Le Pen in his home town.

Wednesday's incident happened outside the Whirlpool appliance factory in northern city of Amiens after Macron arranged to meet the plant workers' union representatives, without actually visiting the facility.

He only arrived there after Le Pen turned up unannounced outside the plant and posed for selfies with workers.

"Everyone knows what side Emmanuel Macron is on - he is on the side of the corporations," Le Pen said. "I am on the workers' side, here in the car park, not in restaurants in Amiens."

After arriving, Macron told angry workers that the only reason that anti-EU Le Pen had come was "because I'm here".

He also retorted on Twitter that she had spent "10 minutes with her supporters in a car park in front of the cameras" whereas he had spent "an hour and a half with union representatives and no media".

Al Jazeera's Natacha Butler, speaking from Arras, said Le Pen showed Macron that "the gloves are off in the battle for the French presidency". 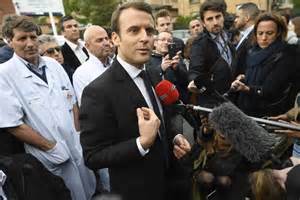 "He was totally upstaged by the far-right leader. It was a real campaign coup. It perhaps shows what some people have been saying that he is inexperienced," she said. "Marine Le Pen is a veteran politician. She knows how to campaign hard."

The factory operated by Whirlpool, a US multinational company, is threatened with outsourcing to Poland.

Macron was in Amiens to try to counter accusations that he had made a complacent start to campaigning for the presidential runoff on May 7.

After winning Sunday's contest with 24.1 percent to Le Pen's 21.3 percent, Macron gave an exuberant victory speech followed by a high-profile celebration at La Rotonde bistro in Paris, drawing criticism from some quarters.

Socialist Party chief Jean-Christophe Cambadelis told French radio: "He was smug. He wrongly thought that it was a done deal. It's not a done deal."

President Francois Hollande appeared on Tuesday to admonish his former economy minister for not taking the fight to Le Pen immediately after the first round.

Macron shot back, saying: "I will continue to fight for two weeks ... I will defend the progressive camp to the end."

A poll on Wednesday suggested that Macron will defeat Le Pen by a margin of 21 points, but as the day's events showed, the far-right candidate is a more experienced political campaigner.

After the shocks of Britain's vote to leave the European Union and Donald Trump's unlikely ascent to the White House, analysts say a late surge by Le Pen is still possible.

A key factor in the race is which candidate the supporters of Communist-backed Jean-Luc Melenchon, who finished in fourth place with 19.58 percent on Sunday, will support in the run-off.


Melenchon faced criticism after he failed to urge people who voted for him to get behind Macron as part of the so-called "republican front", the decades-old French tactic of closing ranks to block the far-right.

Melenchon's spokesman Alexis Corbiere said the hard-left firebrand would not endorse anyone.

Can Marine Le Pen upset the odds and beat the establishment lackey Macron?