Israeli Air-force sent Helicopters just over the border with Syria targeting both Syrian and Hezbollah positions according to Sky News Arabic language. We also confirmed this with noticiasdeisrael.org a Spanish news site. US Finally stands for the Kurds protecting them from Turkish forces. 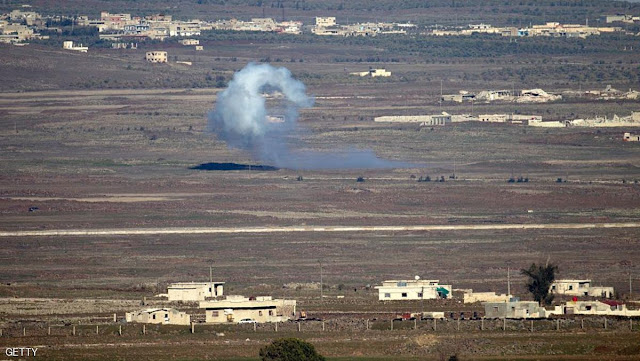 The sources added that the raids were carried out of helicopters flew over the perimeter fence and within the control of the Israeli army.

Targeted RAID hizbollah positions near the headquarters of the secret mentioned, according to our sources.

However, the Syrian military sources denied any attack on sites belonging to brigade 90.

The Israeli army announced that its defenses are considered "aerial targets" over the Golan Heights coming from Syria, while sources said it's a plane without a pilot.

The army said that the battery of Patriot missiles were fired at the "goal of the air" over the Golan Heights.

As the bombing of Israeli aircraft Thursday, a military site near Damascus International Airport targeted "a warehouse for the supply of arms run by Lebanon's Hezbollah group near the airport are being sent a regular supply of Tehran, on commercial airliners and cargo aircraft military" according to Reuters by Intelligence sources.


A few days ago, Jordan warned Lebanon of a potential Israeli strike.
The Jordanian newspaper Assabeel “reported the London-based Al-Hayat newspaper saying that Jordan warned Lebanon about the expected Israeli strike on the margins of the Arab League Summit which took place at the end of March,” according to the Middle Eastern Monitor.
“The newspaper noted that the Jordanian warning was not the only one, but global superpowers and UN Security Council members also expressed similar fears to Lebanon.” Friday, “General Security chief Major-General Abbas Ebrahim has warned that war was ‘just a matter of time’ in the absence of inclusion and understanding in the country,” according to Gulf News.
“Ebrahim, a Shiite officer with close ties to Hezbollah, called for increased cohesion among all political forces in the country and blasted elites for what he called ‘irresponsible rhetoric’.”
Internal political disagreements could be key to destabilization that may be occurring in Lebanon, both internally and externally.
General Ebrahim said at the ceremony held by the Islamic Sunni Association in his honor, as was reported by the Arizona Star, “What we are lacking is the awareness that the nation is the basis of the state. The ongoing political rhetoric … is worrying. … One of the virtues of this country … is the diversity … but its dangers lie in tension and strain that are the forefront of political life.”
“[Following the Civil War] everyone surrendered to the truth that sectarian inclusion … does not hurt the system but is a form of political immunity,” he said.
Internally Lebanon is currently deadlocked with factions within the government wanting future elections to be based on religious sectarianism.
A key figure within this is Lebanese Foreign Minister Jibran Bassil who has been working towards changing electoral law.
“Bassil has championed a sectarian-based two-stage ‘qualification vote’ which he believed would ‘restore Christian’s rights’ that were undermined by the Taif Accords,” according to the Gulf News.
This law is currently being debated in parliament.
However, the Lebanese “constitution has always allowed citizens to vote based on political affiliations and not based on their religion.”
Lebanon has not held elections since 2009. The potential for new election law combined with the potential for strikes from Israel, as well as factions internally seeking segregationist policies could be part of a strategy to divide and conquer Lebanon, as well as limit the power of Hezbollah’s actions in Syria to remove Wahhabist terrorists operating in the region.
Earlier in the April, Lebanese Lebanese Prime Minister Sa’ad Hariri said in an interview with France24 TV station, “I think that Israel is the one that wants to launch a war against Lebanon, and not Hezbollah.”
“Israel does not want the Arabs to rest. Look at the daily Israeli violations of our airspace, land and territorial waters,” Hariri added.
“Hariri’s comments came after Israel unveiled the ‘David’s Sling’ missile system at Hatzor air force base in central occupied Palestinian territories,” according to Press TV.