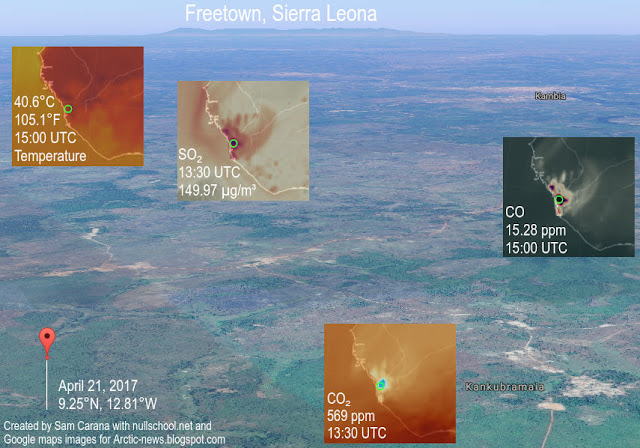 These high emissions carry the signature of wildfires, illustrating the threat of what can occur as temperatures keep rising. Further emissions that come with wildfires are black carbon and methane. 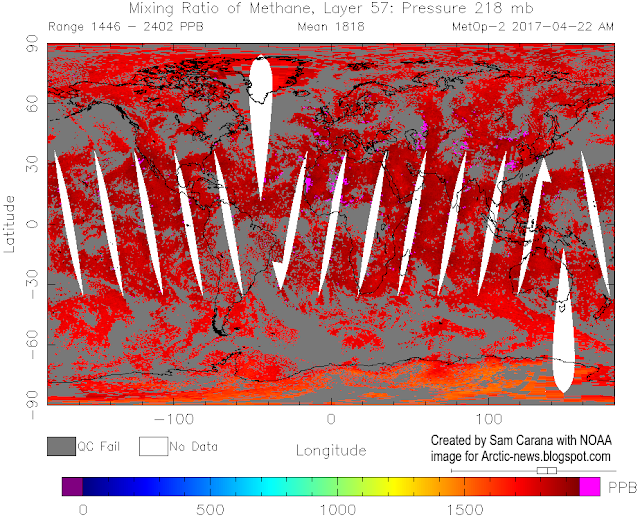 Above image shows methane levels on April 22, 2017, AM, at an altitude corresponding to 218 mb. Methane at this altitude is as high as 2402 ppb (magenta indicates levels of 1950 ppb and higher) and while the image doesn't specify the location of this peak, it looks related to the magenta-colored area over West Africa and this looks related to the wildfires discussed above. This wasn't even the highest level recorded that day. While at lower altitudes even higher methane levels were recorded that morning (as high as 2505 ppb), above image illustrates the contribution wildfires can make to methane growth at higher altitudes. 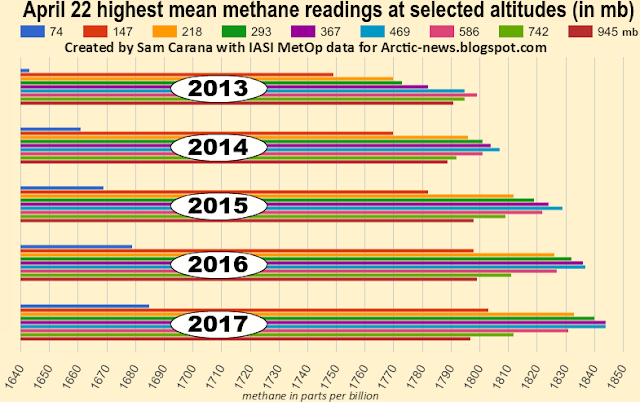 The table below shows the altitude equivalents in feet (ft), meter (m) and millibar (mb).

Above image compares mean methane levels on the morning of April 22 between the years 2013 to 2017, confirming that methane levels are rising most strongly at higher altitudes, say between 6 to 17 km (which is where the Troposphere ends at the Equator), as compared to altitudes closer to sea level. This was discussed in earlier posts such as this one.

Oceans are hit by high temperatures as well. The image below shows sea surface temperature anomalies (from 1981-2011) on April 21, 2017, at selected locations. 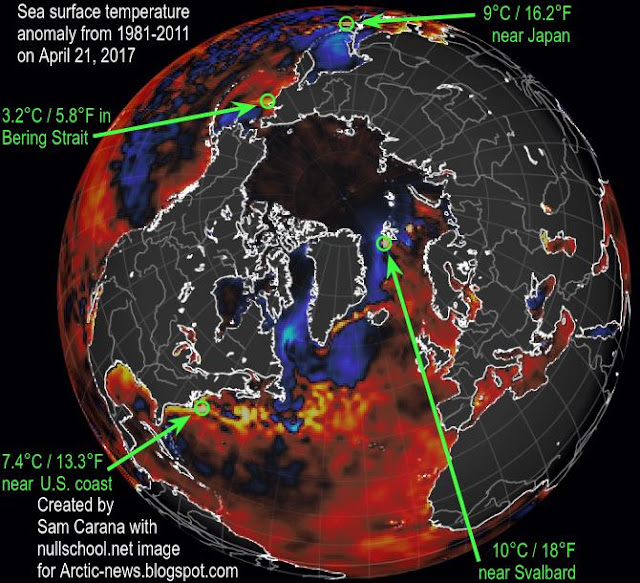 The image below illustrates the danger of accelerating temperature rises. 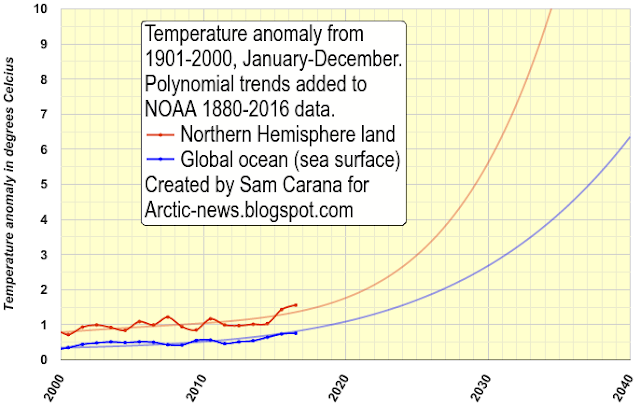 Above image uses trendlines based on data dating back to 1880, which becomes less appropriate as feedbacks start to kick in that accelerate such temperature rises. Indeed, temperatures could rise even faster, due to feedbacks including the following ones:

• Less sunlight getting reflected back into space

As illustrated by the image below, more ocean heat results in less sea ice. This makes that less sunlight gets reflected back into space and instead gets absorbed by the oceans.

• More ocean heat escaping from the Arctic Ocean into the atmosphere

As discussed before, as less heat is mixed down to deeper layers of oceans, more heat accumulates at or just below the surface. Stronger storms, in combination with the presence of a cold freshwater lid on top of the North Atlantic, increase the possibility that more of this ocean heat gets pushed into the Arctic Ocean, resulting in sea ice loss, which in turn makes that more heat can escape from the Arctic Ocean to the atmosphere, while more clouds over the Arctic Ocean make that less heat can get radiated out into space. As the temperature difference between the Arctic Ocean and the Equator decreases, changes are occurring to the Northern Polar Jet Stream that further speed up warming of the Arctic.
• More heat remaining in atmosphere due to less ocean mixing

As also discussed before, warmer water tends to form a layer at the surface that does not mix well with the water below. This stratification reduces the capability of oceans to take up heat and CO₂ from the atmosphere. Less take-up by oceans of CO₂ will result in higher CO₂ levels in the atmosphere, further speeding up global warming. Additionally, 93.4% of global warming currently goes into oceans. The more heat will remain in the atmosphere, the faster the temperature of the atmosphere will rise. As temperatures rise, more wildfires will erupt, adding further emissions, while heat-induced melting of permafrost will also cause more greenhouse gases to enter the atmosphere. 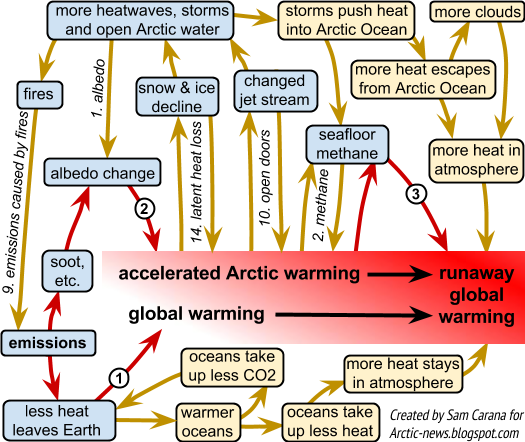 The prospect of more heat getting pushed from the Atlantic Ocean into the Arctic Ocean also comes with the danger of destabilization of methane hydrates at the seafloor of the Arctic Ocean. Importantly, large parts of the Arctic Ocean are very shallow, making it easy for arrival of more ocean heat to warm up these seas and for heat to destabilize sediments at the seafloor that can contain huge amounts of methane, resulting in eruptions of methane from the seafloor, with much the methane entering the atmosphere without getting decomposed by microbes in the water, since many seas are only shallow, as discussed in earlier posts such as this one.

These feedbacks are depicted in the yellow boxes on above diagram on the right.
How fast could temperatures rise?
When taking into account the many elements that are contributing to warming, a potential warming of 10°C (18°F) could take place, leading to rapid mass extinction of many species, including humans.

So, how fast could such warming take place? As above image illustrates, it could happen as fast as within the next four years time.

• How much warming have humans caused?https://arctic-news.blogspot.com/2016/05/how-much-warming-have-humans-caused.html

• Accelerating growth in CO₂ levels in the atmospherehttps://arctic-news.blogspot.com/2017/02/accelerating-growth-in-co2-levels-in-the-atmosphere.html

• Warning of mass extinction of species, including humans, within one decadehttps://arctic-news.blogspot.com/2017/02/warning-of-mass-extinction-of-species-including-humans-within-one-decade.html