US prepares for partition of Syria

US Forces Block Syrian Army Advance in Preparation For Syria Partition
A U.S.-backed operation near Raqqa aims to "block any advance by Syrian government forces from the west". The Balkanization of Syria begins 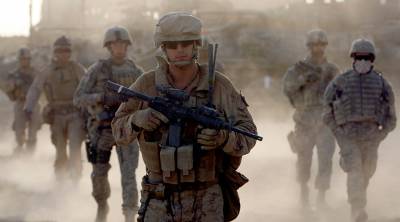 
The road to Raqqa is now blocked by U.S. forces and their allies. The chances that Raqqa (and the surrounding region) will be returned to Syria are now slim to none. Foreign armies and their proxies are sharpening their carving knives.

U.S. Special Forces and Syrian Kurdish and Arab fighters have just captured a "strategic air base" from Islamic State in northern Syria; in doing so, they have also "blocked" the advance of the Syrian Army as it approaches Raqqa from the west:

The Kurdish-led Syrian Democratic Forces (SDF) announced on Sunday that they captured the Tabqa air base, 45km west of Raqqa, the Islamic State of Iraq and the Levant (ISIL) group's de facto capital in Syria.

Earlier this week, US forces airlifted SDF fighters behind ISIL lines to allow them to launch the Tabqa assault, and on Friday the alliance reached one of the dam's entrances.

SDF forces were within 10km of Raqqa from the north, and aimed to effectively surround the city before launching an assault.

But as RFE/RL quietly notes:

Besides recapturing the dam, SDF said the U.S.-backed operation also aimed to block any advance by Syrian government forces from the west.

The landing forces airdropped into Syria seized four small villages in the area west of Tabqa and cut a main highway that links the provinces of Raqqa, Deir al-Zor, and Aleppo, Scrocca said.

The SDF cut the last main road out of Raqqa earlier this month, narrowing in on the city from the north, east, and west.

The only way in or out of Raqqa now is over the Euphrates River that borders the city to the south.

Incredible, isn't it? A foreign army that is illegally operating in a sovereign nation can just march in and cut off the legitimate army of said sovereign nation from liberating its own city from terrorists.