The presidential debate was rigged

I watched the debate and apart from the lamentable performance of Trump what was evident that Hillary had plenty of help from the media and was very well-prepared.

Sassy Liberty AMERICA’S FREEDOM FIGHTERS –
In true Clinton fashion, Hillary and her team of lawyers managed to scheme and plot to work out a “sweet deal” for Hillary.  The debate deal guaranteed that Hillary would NOT be asked any questions that could be termed “cross-examination” by the moderator – AT ALL!
VIA americasfreedomfighters

Basically, this allowed Hillary to memorize canned answers and recite them back by route during the debate.  She has no merits to speak of and a record that is less than stellar.  She can’t win using either of them, so she cheats instead.  Because her handlers did not think she would respond well to stressful questions or rhetoric, they had Hillary memorizing a full script of canned answers that may not even directly address the subject or question.

This strategy went off without a hitch because a deal was negotiated. The deal was that moderators would not redirect Clinton or cross-examine her original answer to a question, regardless of her answer. She could have spouted the sky is green, the grass is blue, and the moon is made of swiss cheese! Hillary then had free reign to pontificate about whatever nonsense she memorized without fear of being called out on her verbal diarrhea!

Of course, as you can imagine, no such deal was in place for Trump and he paid the price with the Holt railroad job. 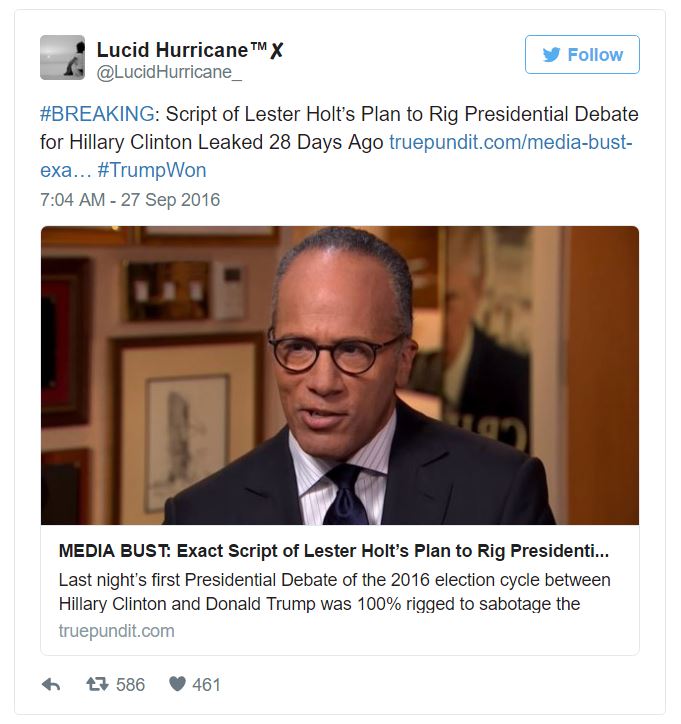 According to True Pundit, the exact script for Lester Holt’s plan to rig the Presidential debate was leaked approximately 28 days ago and it all went down last night exactly as scripted to the letter. 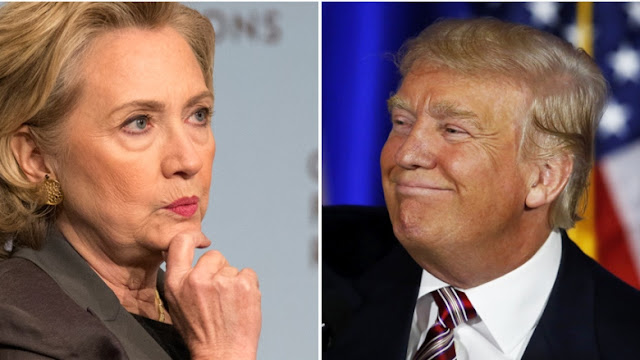 Conservative Tribune,
17 September, 2016
If you watched the first presidential debate Monday evening, you may recall a segment during which Democrat nominee Hillary Clinton discussed cyber-security, focusing in on Russia and its alleged control over computer hackers who have stolen sensitive information from America.
Aside from her pure hypocrisy in having the gall to discuss cyber-security in light of her private email server scandal, Clinton’s hard line on Russia also raised some eyebrows for its hostile tone and bellicose rhetoric.
Former close Clinton adviser Dick Morris noticed that and had a few words to say about it in a video posted to his website, in which he asserted what he thought was the real reason Clinton essentially threatened Russian President Vladimir Putin over cyber attacks in the United States, such as occurred with the hacking of the Democrat National Committee and other liberal political organizations.
“I think that Hillary is preparing for Putin to release all of deleted emails right before the election, which will prove number one the content and show that she was covering a lot up,” Morris said.
“Number two, and mainly, the fact that our worst enemy has that information shows that she totally compromised national security, and all of the classified material on those emails, there were 2,000 emails with redacted material, that will show up now in plain print, courtesy of Russia,” he continued.
“That will show that Hillary really endangered our national security and has lied about it since day one,” he added, noting such a revelation could very well knock her out of the race — or at least secure her defeat
Morris surmised that Clinton is aware and afraid of the potential for a Russian “October surprise” to destroy her chances in the general election, which is why she issued such a threatening message to Putin during the debate.
“She warned darkly that there are things we could do, terrible things we could do to counter what they are doing, and (she said) ‘I don’t want to do that, but they exist and I just want to warn Putin if he persists with cyber-invasions, the United States will defend itself,'” Morris explained.
Morris took that as essentially a threat of cyber-warfare, in which the U.S. could attack the Russian electrical grid and cause nationwide blackouts, which could very possibly lead to an actual shooting war.
To be sure, Morris offered no concrete evidence supporting his supposition, but it nevertheless seemed quite plausible as an explanation for her sudden shift to a hard-line position against Russia following years of touting her friendly outreach via the “reset button” toward the once formidable superpower.
Should Morris’ assertion that foreign rivals are holding sensitive national security information obtained via Clinton’s emails prove correct, that would totally undermine Clinton’s image as trustworthy chief executive.
That could be enough to cost her the election. No wonder she threatened Putin so strongly.