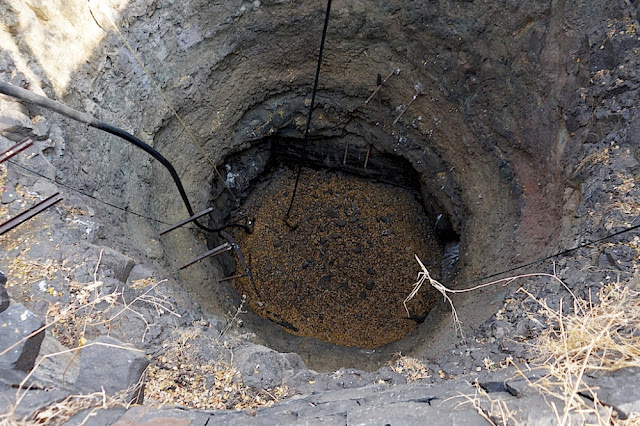 She had no choice but to sell off her land and remaining cattle at cut-rate prices, and bring her two children to this overcrowded cluster of huts constructed from tarpaulins and other scavenged materials in New Delhi.

"Water in the Penna River has completely dried up,” Manikamma said. “We got drinking water in our homes only once a week. Had I not left ... my kids would have died of starvation.”

Parts of the country have been in the throes of drought for two years, which has caused a wave of migration as crops fail. After months of high temperatures and dry weather, the monsoon rains have finally arrived, although they have yet to reach some drought-stricken areas in central India. And the past two monsoon seasons have been too weak to stave off the drought.

Many people have been forced to leave their parched fields for India’s cities in search of work. Like Manikamma, who makes $4 a day carrying bricks, they often find employment on construction sites.

Authorities at the state and federal level have been criticised for their poor response to the drought, which has affected about a quarter of the country’s 1.3 billion people, according to a submission to the Supreme Court by the central government in April. The testimony was in response to a case filed by an NGO to push the government to create a standard policy for declaring drought and providing compensation.

Also in April, a group of more than 150 leading economists, activists, and academics wrote an open letter to Prime Minister Narendra Modi, calling the government’s response “listless, lacking in both urgency and compassion”.

In the absence of adequate assistance, rural people have been forced to “migrate en masse”, according to a recent paper published by a group of NGOs.

Evidence of mass migration is obvious in villages that are emptying out, and in the city train stations where villagers arrive with all the belongings they can carry.

The government has released no figures on the numbers of drought migrants, but Caritas mentioned numbers from one village in Maharashtra State, Barnapur, telling IRIN that 70 of 1,000 inhabitants had left in search of work.

"So far, climate migration hasn't been high on India’s policy agenda due to more pressing challenges like poverty, population growth, and urbanisation," Shashank Shekhar, an assistant professor from the Department of Geology at the University of Delhi, told IRIN. "But given the current protracted agrarian crisis, a cohesive reconstruction and rehabilitation policy for migrants becomes imperative."

The government does have plans to help farmers – in the long term.
When he presented the national budget in February, Finance Minister Arun Jaitely said the government planned to double farmers’ incomes within five years.

The budget allocates $16 billion for rural development, including $2.5 billion for delayed irrigation projects. The government has also approved a $1.3 billion insurance programme, which will allow farmers to insure their crops against natural damage at premiums as low as 1.5 percent of the value of the crops.

"But these measures will take time to show results," a senior official from the Ministry of Water Resources who was not authorised to speak publicly told IRIN.
In the meantime, farmers like Ram Lal, from the central mountain region of Bundelkhand, have no option but to migrate in search of work.

“We're farmers and have never done construction work before,” said Lal, who has been living under a flyover in central Delhi for the past month. “But do we have a choice?”