Rain and cooler temperatures have allowed firefighters to better assess the size of the Fort McMurray wildfire, and it’s bigger than previous estimates suggested.

The latest estimates peg the wildfire at 522,894 hectares on the Alberta side, and 2,496 hectares across the border into Saskatchewan, Laura Stewart, an Alberta wildfire information officer, confirmed Sunday afternoon.

While the fire was reported to be 504,443 hectares yesterday, Stewart said it hasn’t grown, rather the weather helped to clear smoke in the area allowing firefighters to better assess the size.

“Firefighters are making really great progress, taking advantage, of course, of these cooler temperatures,” she said, noting more rain is expected in the Fort McMurray area.

Fire conditions in northeastern Alberta remain extreme and the wildfire in Fort McMurray remains out of control, even with the cooler weather.

But that cooler, wet weather has allowed firefighters to reclassify the fire near Janvier, which was also reported as out of control on Saturday.

A lot more rain fell in the Janvier area and the 146-hectare fire is now being held, Stewart said, adding that it isn’t expected to grow any further.
Sixteen other fires are also burning in the province.

There are 1,880 firefighters, 104 helicopters, 29 air tankers and 295 pieces of heavy equipment being used to fight wildfires across the province.

Random camping on public lands in the Regional Municipality of Wood Buffalo has been banned to prevent the need for firefighters to respond to other emergency situations.

Fort McMurray residents are expected to be able to start returning home on June 1 on a voluntary, phased basis.

The municipality has released a timeline and map outlining the phased re-entry plan.

Atco employees are in the city working to restore critical utility infrastructure. As of Sunday afternoon gas service had been restored to 90 per cent of undamaged areas in Fort McMurray and more than 90 per cent of the city had electricity.

A boil-water advisory remains in effect for the Fort McMurray area and any work camps that draw water from the Regional Municipality of Wood Buffalo water treatment plant.

An air quality advisory has also been issued for the Fort McMurray area due to the wildfires.

Alberta rallies international help for Fort McMurray wildfires
More than 1,000 firefighters from around the world on their way to Alberta 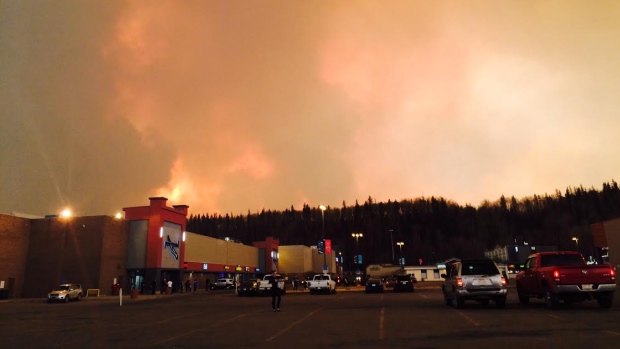 Alberta's fire boss hopes fresh feet at the perimeter of Fort McMurray's massive fire will save some of the province's most valuable assets.

More than 1,000 firefighters from across Canada, the U.S., South Africa and other countries will soon join the roughly 1,200-member fire crew already in Fort McMurray.

Provincial wildfire manager Chad Morrison said his team made the decision to order them up last week — around the time the fires swept to the edges of oilsands sites, forcing a mandatory evacuation of 19 facilities north of Fort McMurray.
Those evacuation orders have since been lifted, but caution continues as flames keep raging and growing.

"This fire is not under control by any means," Morrison said in a news conference Tuesday, when asked if the oilsands are in the clear.

He said there is no immediate threat, but added it's early yet, both in the life of this fire and the fire season in general.

And with no significant rain in two to three months — combined with warm forecast this week — it's going to stay tough.

"There always is that potential," that flames could cross the firebreaks around the Suncor and Syncrude facilities, that firefighters patrol, Morrison said.

"That's why we're investing thousands of resources," he said. "We continue to secure the sites around there. We expect to hold it as best we can over the next coming days."

Morrison called the new crews "qualified, certified, and highly trained" and said they are coming from as far away as Alaska and South Africa.

The North American reinforcements will arrive this week, while some 280 South African firefighters will get here next week.

Their "critical priority" will be securing the oilsand sites in the north, he said.
It's estimated roughly one million barrels per day have been lost due to the fire, which amounts to about half the typical daily output. 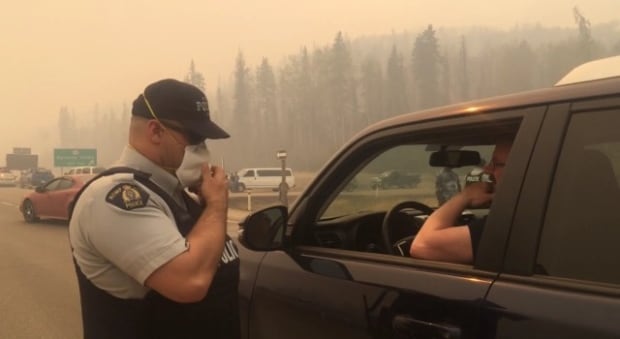 An RCMP officer adjusts his face mask at the northern road block outside Fort McMurray. Air quality, which has fluctuated as high as a 51 on the 1-10 risk scale, was at six Tuesday morning. (Marion Warnica/CBC)

Not all of that loss was attributed to threat from fires, but rather loss of workforce. Many oilsands employees are residents of Fort McMurray were evacuated from town.

Lately, dozens of oil workers have reported being evacuated from housing two or three times through a combination of precautionary and mandatory evacuation orders in the north, and the original exodus from the town itself.

Suncor and Syncrude, the two oilsands plants shuttered under mandatory evacuation orders last week, are now working with the province on a phased re-entry plan for some of those employees.

Provincial officials say they're overseeing plans from affected companies, testing air quality and making sure labour regulations are met before staff are allowed to come back.

Inside the town, the focus swivels to preparing for the return of evacuees.
It's a process that Scott Long with the Alberta Emergency Management Agency calls "an awful lot of work." And it continues day and night.

This week, they'll run a rehearsal to look more closely at their planning.

"If there's any gaps that we have not thought of, we will quickly address those," Long said. 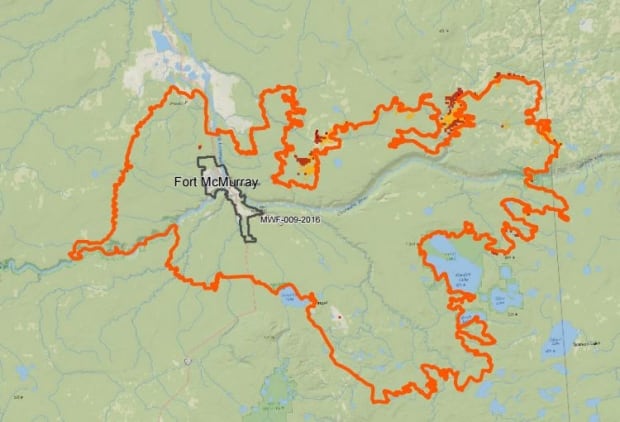 This map from the provincial government shows the large perimeter of the fire on May 24. (Government of Alberta)

A detailed booklet telling evacuees what to expect, if they decide to return to Fort McMurray during the voluntary re-entry starting June 1, is now available online.
The province has also made significant progress on basic services.

Fort McMurray's commercial airport also announced Tuesday it plans to re-open June 10. And the RCMP detachment has now restarted its local office, with the majority of personnel returned.

The wildfires, which continue to burn out of control, grew over the weekend and have now consumed 522,892 hectares.

Rain and snow that hammered most of the province over the weekend largely skipped the wildfire area.

The Fort McMurray region saw at most 5 mm of rain, compared to the more than 100 mm seen in some parts of Edmonton.

But despite the many challenges, officials found some positive news to share.

Three weeks of warm, dry-as-dust conditions since the fire roared through town, mean even small showers and minor temperature dips seem like big victories.
Morrison said the break allowed crews to finalize 178 km of fire guard around the fire's perimeter.

That fire guard will make it easier for those new support crews to fight the fire on the ground.

Morrison said Tuesday will be another "challenging" day, though he remained, as ever, optimistic.

"We continue to make great progress." 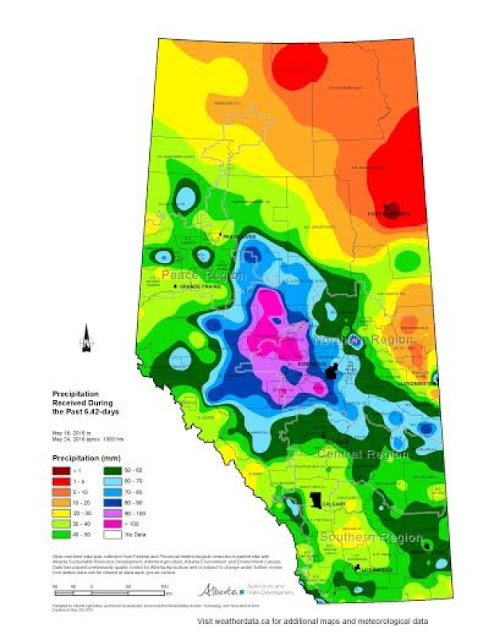 This map from the provincial government tracks rain levels in Alberta over recent days. (Government of Alberta)


Canada loses quarter of crude output as result of wildfires 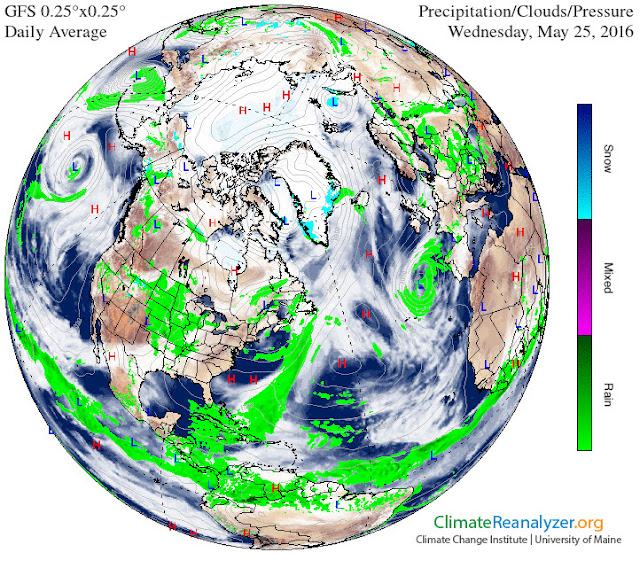 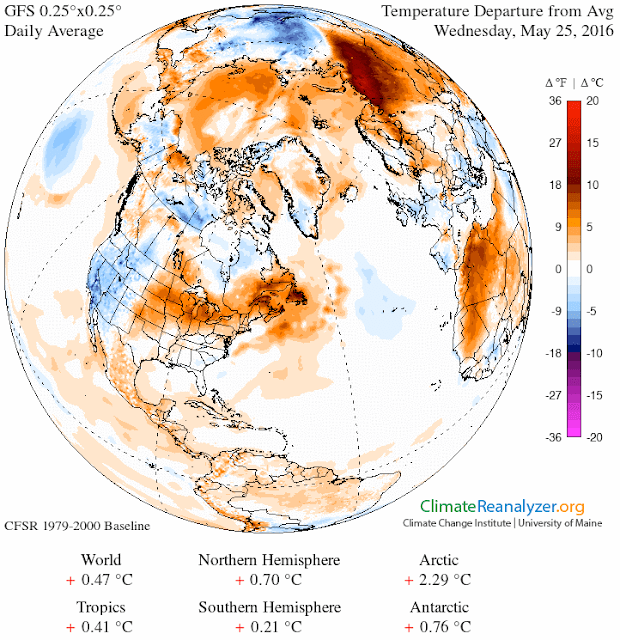 Canada and Siberia on fire