The Arctic melt season may already have begun


A Monster 2016 Arctic Melt Season May Have Already Begun 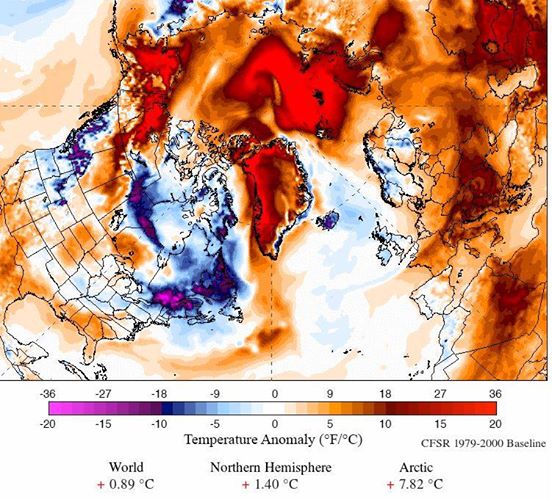 “Hell is empty… all the devils are here.”
William Shakespeare — The Tempest.

******
Robertscribbler,
22 February, 2016
We have never seen heat like this before in the Arctic. Words whose meaning tends to blur due to the fact that, these days, such events keep happening over and over and over again.
Ever since at least the 1920s, the Arctic has been warming up due to a destructive and irresponsible human greenhouse gas emission. And, over recent years, the Arctic has been warming more and more rapidly as those dangerous emissions continued to build on into the 21st Century. Now the Earth has been shoved by those emissions into realms far outside her typical Holocene context. And it appears that the Winter of 2016, for the Arctic, has been the hottest such year during any period of human-based record-keeping and probably the hottest season the Arctic has experienced in at least 150,000 years.

(Climate Reanalyzer hits a stunning 7.06 C above the already hotter than normal 1979 to 2000 baseline for the entire region above the 66 North Latitude Line on February 22nd of 2016. It’s a very extreme temperature departure — one this particular analyst has never seen before in this record. For reference, a 3 C above baseline temperature departure for this region would be considered extraordinarily warm. What we see now is freakish, outlandish, odd, disturbing. Image source: Climate Reanalyzer.)

It’s just the most recent marker on a path toward an ever-worsening polar heat that is becoming all-the-more difficult to ignore or deny. For at current greenhouse gas levels, that polar zone is hurtling toward temperatures not seen in 15 million years. A heat pressure that will push for warming not seen in 20, 30, 50 million years or more, if a nightmarish fossil fuel burning continues.

Nothing in the recent geological past can compare to the danger we are now in the process of bringing to bear upon our world. Not the Great Flood. Not the end of the last ice age. Those were comfortable, normal cataclysms. Human beings and life on this world survived them. But the kind of geophysical changes we — meaning those of us who are forcing the rest of us to keep burning fossil fuels — are inflicting upon the Earth is something entirely new. Something far, far more deadly.

At the start of 2016, we find ourselves experiencing a year during which our world is steepening its ramp-up toward this kind of catastrophic global heat. During January of 2016, the Arctic experienced its most extreme temperature departures ever recorded. February, it appears, was at least as bad. Today, daily temperature departures for the Arctic in the Climate Reanalyzer measure were a stunning +7.06 above an already hot 1979-to-2000 baseline (see graphic above).
To put this in perspective, a region larger than 30 million square kilometers or representing fully 6 percent of the Earth’s surface was more than 7 degrees Celsius hotter than average today. That’s an area more than three times larger than the United States including Alaska and Hawaii. A region of the world that includes a vast majority of the remaining frozen Northern Hemisphere land and sea ice. And since an extreme heatwave is typically defined as temperature departures at about 3 C above normal for an extended period of time over a large region — the Arctic appears to be experiencing some ridiculously unseasonable temperatures for this time of year.

(A seemingly unstoppable period of record warmth continues for the High Arctic on February 22nd. Readings for this zone have consistently remained in the warmest 15 percent of readings on up to record warmest readings for each day since January 1, 2016. Image source: NOAA.)

Above the 80 North Latitude line, departures were even more extreme — hitting about 13 C or about 23 F warmer than normal for the entire High Arctic surrounding the North Pole today (see above graphic). Temperatures that are more typical for late April or early May as we enter a time of year when this region of the Arctic is usually experiencing its coldest readings and sea ice extents would normally continue to build.

Unfortunately, today’s extreme heat was just an extension of amazing above average Arctic temperatures experienced there since late December. So what we are seeing is consistently severe Arctic warmth during a season that should be Winter, but that has taken on a character more similar to a typical Arctic Spring. Warmth that is now enough to have already propelled the Arctic into its warmest ever yearly temperatures when considering a count of below freezing degree days.

(Degree Days below Freezing [or Freezing Degree Days, FDD] shows a 670 FDD departure below that seen during a typical year. If the current trend continues, the Arctic may see degree days below freezing lag by between 900 and 1,500 — knocking off about 15 to 25 percent of below freezing days from a typical Arctic year. Note that the departure line steepens rapidly after the first major warm wind event hits the Arctic during late December of 2015 — driving temperatures above freezing at the North Pole for the first time ever so late in the year. Image source: NOAA.)

Freezing degree-days (FDD) or thawing degree-days (TDD) are defined as departures of air temperature from 0 degrees Celsius. The less FDDs during an annual period, the warmer the Arctic has become. Under the current trend, the Arctic is now on track to hit between 15 and 25 percent less FDDs than it experiences during a typical year in 2016.

Looking at the above graph, what we see is an ongoing period in which Winter cold has been hollowed out by a series of warm air invasions rising up from the south. These warm wind events have tended to flow up through weaknesses in the Jet Stream that have recently begun to form over the warming Ocean zones of the Bering, Northeast Pacific, Barents, and Greenland seas. Still more recently, warm wind events have also propagated northward over Baffin Bay and Western Greenland — even shoving warm air into the ocean outlets of a typically frozen Hudson Bay.
Perhaps more starkly, we find a steepening in the rate of Freezing Degree Day loss following the freakish series of storms that drove the North Pole above Freezing during late December of 2015 — the latest during any year on record that the North Pole has experienced temperatures exceeding 0 C.
Arctic Sea Ice Declining Since February 9th

Overall, a rapid heat uptake by the world ocean system appears to be the primary current driver of extreme Arctic warming. Atmospheric heat from greenhouse gas warming swiftly transfers through the ocean surface and on into the depths. During recent decades, the world ocean system has taken in heat at a rate equal to the thermal output of between 4 and 5 Hiroshima-type bombs every second (with some individual years hitting a much higher rate of heat uptake).
Since thousands of meters of warming water insulates better than the land surface and diaphanous atmosphere, this added heat is distributed more evenly across the globe in the world ocean system. As such, ocean warming is a very efficient means of transferring heat to the Northern Hemisphere Pole in particular. The reason is that the Pole itself sits atop the warming and globally inter-connected Arctic Ocean. In addition, the warming surface waters, as noted above, provide pathways for warm, moist air invasions of the Arctic — especially during Winter.
For 2016, these kinds of heat transfers not only resulted in an extreme warming of airs over the Arctic, they have also shoved the Arctic sea ice into never-before-seen record lows for area and extent.

(NSIDC shows Arctic sea ice entering a new record low extent range from February 2 through February 21 of 2016. A peak on February 9 and decline since concordant with record warmth building throughout the Arctic begs the question — did the sea ice melt season start on February 9th? Possible — but too early to call for now. Image source: NSIDC.)

Off and on throughout January, but more consistently since early February of 2016, Arctic sea ice has continued to hit new daily record lows. For Arctic sea ice extent, the record lows entered a streak that has now been unbroken since February 2nd. By the 21st, extent measures had hit 14.165 million square kilometers in the National Snow and Ice Data Center measure. That’s about 200,000 square kilometers below the previous record low extent value for the date set during 2006.

Perhaps more ominously, the current measure appears to have fallen off by about 50,000 square kilometers from a peak set on February 9th. And with such extreme heat driving into the Arctic over recent days, it appears that this departure gap could widen somewhat over the coming week.
Overall, radiation balance conditions for the Arctic are starting to change as well. The long polar night in the Arctic is beginning to recede. Sunlight is beginning to fall at very low angles over the sea ice, providing it with another nudge toward melting. Finally, the greatly withdrawn ice has uncovered more dark ocean surfaces that will, in turn, absorb more sunlight as the Arctic Winter proceeds on toward Spring.
With sea ice declining slightly since February 9, with record warmth already in place in the Arctic, and with the sun slowly beginning to provide its own melt pressure, it appears risks are high that we see a record early start to Arctic melt season. Seven day forecasts do show high Arctic temperature departures receding a bit from today’s peak at around 6-7 C above average to between 4 and 5 C above average by the start of next week. But heat at the ice edge in the Bering, Barents, Greenland Sea and Baffin Bay are all likely to continue to apply strong pressure on sea ice extent and area totals. In addition, recent fracturing within the Beaufort has generated a number of low albedo zones that will face a wave of unseasonable warmth riding up over Alaska during the coming days which will tend to slow rates of refreeze even as Western Alaska’s waters feel the heat pressure of off and on above freezing temperatures.
So it appears we may have already begun, in early February a melt season that will last through mid-to-late September. It’s too early to make the call conclusively, but the Arctic heat and melt trends necessary to set up just such an ominous event do appear to be in place at this time.
Links:
Climate Reanalyzer
No Winter For the Arctic
The Keeling Curve
The Arctic Sea Ice Blog
NOAA: Mean 2 Meter Temperatures North of 80 North Latitude
NOAA: Frequently Asked Questions About the Arctic
Grasping at Uncorrected Straws
The Oceans Warmed by a Rate of 12 Hiroshima Bombs per Second in 2013
The Polar Science Center
Trends in CO2 Emissions
Warm Arctic Storm to Unfreeze the North Pole
Congress Members Call for Investigation of Shell over Climate Change Lies
Could Lawsuit Against Exxon Mobile Force Fossil Fuel Industry to Pay for Lies about Climate Change?
William Shakespeare Quotes
NSIDC
Hat Tip to Planet in Distress