North Pole unfreezing for a seond time this winter 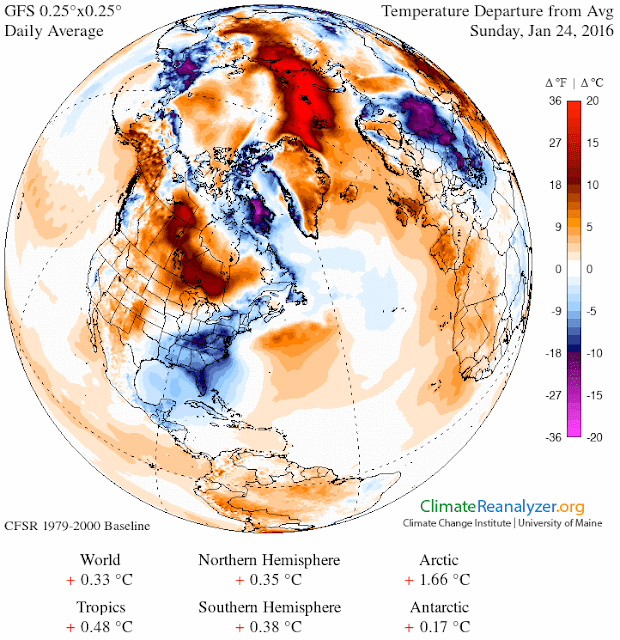 Robertscribbler,
23 January, 2016
It’s worth re-stating. The Starks were wrong. Winter isn’t coming. Winter, as we know it, is dying. Dying one tenth of a degree of global oceanic and atmospheric warming at a time. Steadily dying with each ton of heat-trapping greenhouse gasses emitted through our vastly irresponsible and terrifyingly massive burning of fossil fuels.
******
According to UCAR reanalysis, it’s something that’s only happened three times during December in the entire temperature record for the North Pole since the late 1940s. Four times now that a record warm surge of air hit that highest point of Northern Hemisphere Latitude during late December of 2015. An event that was influenced by the very destructive Winter Storm Frank. A combination of weather variables that, by themselves, was odd and rare enough. But what may be about to happen next week is even more rare. Because we’ve never, not once, seen this kind of heat set up at the North Pole during January.

(UCAR’s North Pole temperature data record since 1948 per Bob Henson shows no above freezing days at the North Pole during January through late April. But it could happen next week.)

Disturbingly, what we’re seeing now starting to take shape is another warm air invasion of the Arctic with the potential to bring above-freezing temperatures to the North Pole during the long polar night. An odd and highly abnormal event that may again take place this Winter in just a few more days. If it does happen it will be yet another case of a never-before-seen warming event occurring in a record hot world.
North Pole May Unfreeze A Second Time This Winter

According to Global Forecast Systems model reanalysis by Earth Nullschool, it appears that a record warm Earth atmosphere and ocean system is again taking aim at the High Arctic. Another synoptic daisy chain of storms funneling warm, south-to-north winds — dredging them up from the tropics, flinging them across thousands of miles of North Atlantic Ocean waters, driving them up over Svalbard and toward the North Pole — is predicted to set up by early morning Monday.

The anchor of these dervishes of Equator-to-Pole heat transfer is the very Winter Storm Jonas that just crippled the Eastern US with record snowfall amounts and storm surges that have beaten some of the highest seas seen during Superstorm Sandy. A second, hurricane force low in the range of 950 mb is predicted to set up between Iceland and Greenland. But the tip of this spear of record atmospheric heat pointed directly at the Arctic is a third, but somewhat milder 990 mb, storm.
And it is this northern low that will draw a leading edge of record warmth into the Arctic. An anomalous, ocean-originating heat front that will spread its pall of air warm enough to melt sea ice during Winter north of Svalbard tomorrow. A swath of near and above-freezing temperatures spreading inexorably Pole-ward. Reinforced by the supporting lows and the synoptic wave of warmth in train, this storm is predicted to drive near or slightly above freezing temperatures into the region of 90 North Latitude by late Tuesday or early Wednesday. An event that would be unprecedented, at least in modern meteorological reckoning. One that may well be unprecedented for the whole of the Holocene.
Conditions in Context — Another Summer-Type Heatwave For The Arctic During the Long Dark of Winter 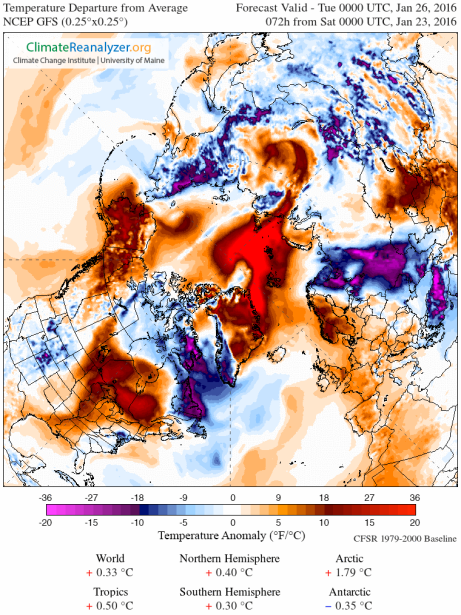 (Another wave of extreme, above average temperatures for the Arctic is on the way. Image source: Climate Reanlyzer.)

To put such extraordinary temperatures into context, this predicted record polar warmth is in the range of 55 degrees (F) above normal for January. And for such a typically frigid region, these temperatures are more usual for June, July, or August. Or, to make another comparison, for Gaithersburg, Maryland it would be like seeing readings above 94 degrees (F) for the same Winter day. A summer heatwave in the midst of what should be a season of cold. That’s what’s predicted for a region that will not see a single ray of sunlight until April.
Heat trapping gasses with the ability to re-radiate the sun’s energy in the dark of night or in the depths of Winter are now having a profound impact on our world. It’s something that should really be keeping us up at night. At the very least, it’s something that on Tuesday may push the North Pole up above freezing on a, black as night, January day.
Links:
Warm Arctic Storm to Push Temps Above Freezing at North Pole During Winter
The Storm that Will Unfreeze the North Pole
Climate Reanlyzer
Earth Nullschool
Bob Henson
UCAR Climate Reanalysis
Hat Tip to Greg 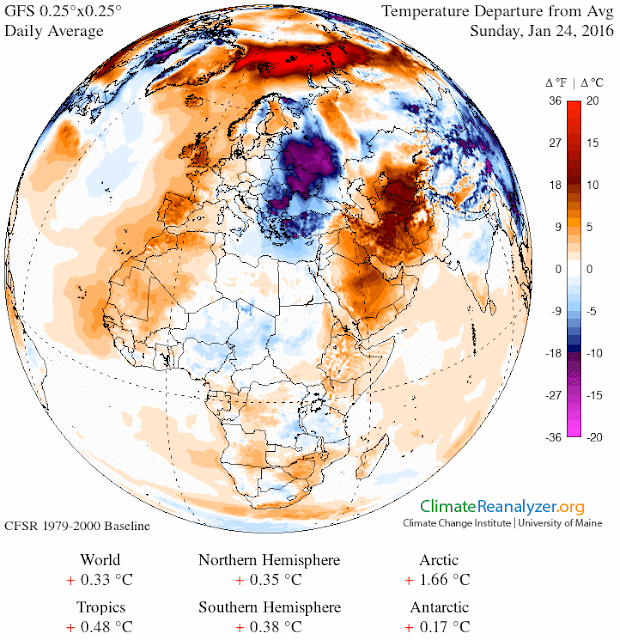