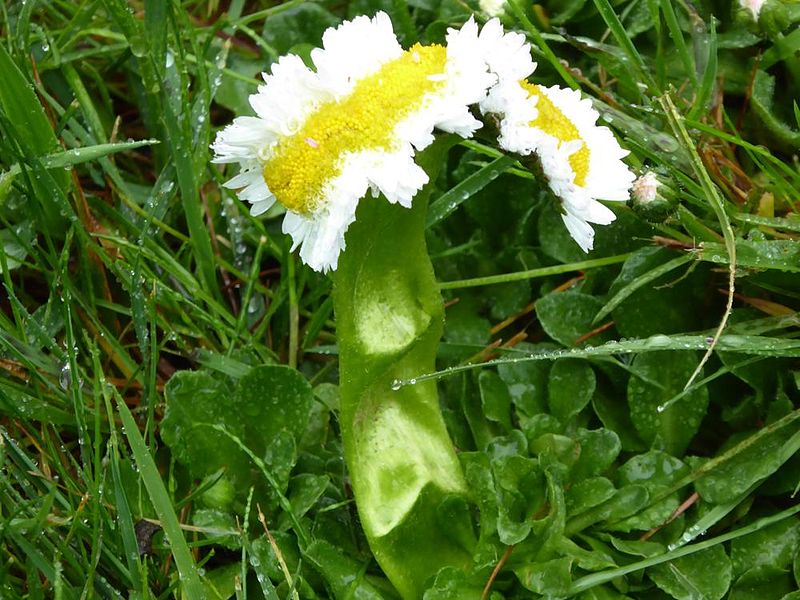 Rather deformed looking daisies are popping up around Fukushima – four years after the nuclear disaster.
March 2011 saw a meltdown in three of Fukushima's six nuclear reactors following the tsunami which devastated Japan, with much of the area being affected by radiation.

The image of the flowers was posted by Twitter user @San_kaido from Nasushiobara city. The tweet reads: "The right one grew up, split into 2 stems to have 2 flowers connected each other, having 4 stems of flower tied belt-like. The left one has 4 stems grew up to be tied to each other and it had the ring-shaped flower. The atmospheric dose is 0.5 μSv/h at 1m above the ground."
Social media has been ablaze with rumours that the images have been doctored, but it is in fact a real condition.
The conclusion that one would jump to would be to assume that it is the result of radiation in the soil which ultimately births disfigured plants, but this occurrence is not exclusive to Fukushima or other places which have experienced nuclear disasters.
It's a natural condition called fasciation – a rare ailment in vascular plants. Most land plants' tips grow from the centre outwards as one point produces cylindrical tissue.
However, with fasciation the tip grows outwards and becomes elongated from the point of growth, which produces the flat, longer looking flower head.
Several factors can induce fasciation. Hormonal imbalances in the plant have been touted as a likely explanation, but it can be brought on by genetic mutation, and even bacterial, fungal and viral infections.
It can occur in a wide array of plants, including cannabis, and can also be caused by damage to the environment – so it will come as no surprise to see them sprouting at the site of Fukushima. However, the can occur anywhere – as this man from Oxfordshire told the Daily Mail.

It is a rare condition, but is it one that can be treated? No, says gardeningknowhow.com. Their website reads: "Once the damage is done, you can't correct fasciation on that particular stem. In some cases, you may be able to prune out the affected stems without damaging the plant. The good news is that perennials that exhibit fasciation may be perfectly normal next year, so there is no need to destroy the plant."