The NZ Herald hacks having a go at RNZ journos
And as of 15m ago ... from Brent Edwards ...

"what wished was that I would never have to tweet that. But the Herald's conduct can't be ignored ‪#‎qualityjournalism‬." 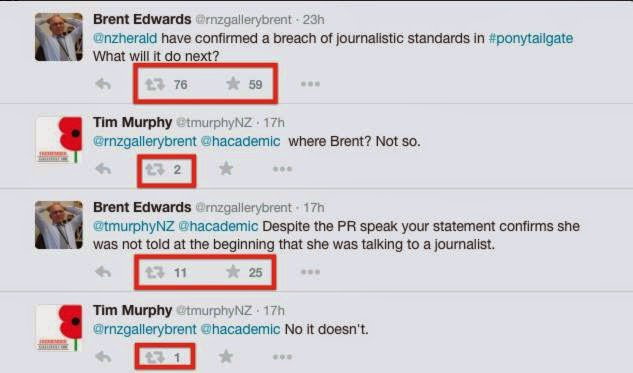 'Strong stuff': the media's role in #ponytailgate
On Wednesday, the UK-based Guardian reported that Radio Live talkback host Sean Plunket "would not be discussing the hair-pulling controversy because it appeared to him a "cheap little scummy political set-up". However, on his show the next morning he was unable to hold that line, partly because the reporting of it also became a story.

The ponytailed waitress at the heart of it all, Amanda Bailey, was on the front page of the New Zealand Herald, under the headline "Waitress speaks":

"While she regretted the attention the controversy brought on her workplace and co-owners, she had no regrets about exposing Mr Key's behaviour".

In fact, there was more in the story about her employers, who said they were "...disappointed Ms Bailey" - who they say has "strong political points of view" - went public rather than coming to them directly with her concerns.

However, they are hoping to "put this all behind us" now.

Little chance of that, after the "waitress who spoke" posted again on The Daily Blog to say she didn't realise she was speaking to the New Zealand Herald and its reporter Rachel Glucina, who usually specialises in stories about celebrities and showbiz.

Amanda Bailey insisted she thought she and her two employers were speaking to a PR person called 'Rachel' who was listening on a phone line, and was helping to prepare a mutually-agreed statement and photo.

"As we waited for Rachel to e-mail the draft proof one of my employers read aloud to the other Rachel's e-mail address. It began… RACHEL.GLUCINA and alarm bells went off. Sounded familiar, and I felt sick to my stomach... a feeling I simply could not ignore."

Amanda Bailey insisted her comments were taken out of context by the Herald's story, and other journalists believed a serious breach of ethics may have taken place, sparking this exchange between Radio New Zealand's political editor Brent Edwards and Herald editor-in-chief Tim Murphy 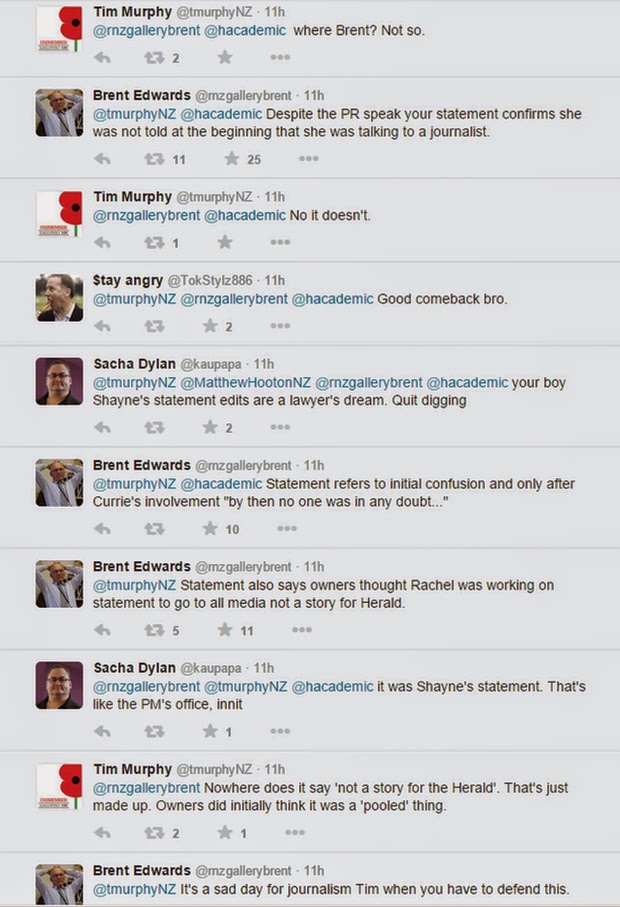 The Herald's editor Shayne Currie insisted his reporter and his paper did nothing wrong, but a series of similar statements published during Thursday at the end of their story didn't really help establish precisely what had happened and how this could have been just one big misunderstanding.

Edits to the story. - Photo: RNZ

Editor Shayne Currie and reporter Rachel Glucina did not respond to requests to be interviewed on Thursday, leaving other questions unanswered:

"Information or news obtained by subterfuge, misrepresentation or dishonest means is not permitted unless there is an overriding public interest and the news or information cannot be obtained by any other means".

Conceivably, Amanda Bailey may have been in a position to reveal evidence of misconduct on Wednesday which might have been of genuine public interest. But her views about the PM's conduct were already known from her earlier widely-reported blog post and what was revealed in Thursday's Herald story didn't meet that mark.

The code of ethics for the journalists' main union - the EPMU
- says journalists "shall report and interpret the news with scrupulous honesty" and in doing so . .
In theory, only the union's member can be disciplined for failing to abide by these principles, but media organisations the world over have similar principles set out in guidelines for their staff.

Some people convinced the New Zealand Herald has acted unethically in this case say they'll complain to the Press Council (though first they'll have to write to the newspaper itself with their concerns).

Dylan Reeve @DylanReeve
If this is true then Rachel Glucina and @nzherald ought to be on the receiving end of press council complaint! - http://thedailyblog.co.nz/2015/04/23/update-the-prime-minister-and-the-waitress-part-2-dirty-politics/ …

But this may not necessarily establish if a breach has occurred.

In some past cases, where the contrary claims of journalists and complainants couldn't be reconciled, the Council declined to accept one version over another.

In one such case Press Council concluded the following:

'In whatever way the breakdown in communication occurred, the case is a reminder to reporters that subjects should be told in plain language their name and photograph will be in the newspaper along with their expressed opinions.'

However the story of 'The PM and the Waitress Part 2' ends, the same applies in this case.