More great work by Mimi German calling out the pretenders to the throne and especially Bill McKibben from 350..org who thinks the solution to our carbon problem is nuclear when the low carbon footprint of nuclear is nothing but a lie. 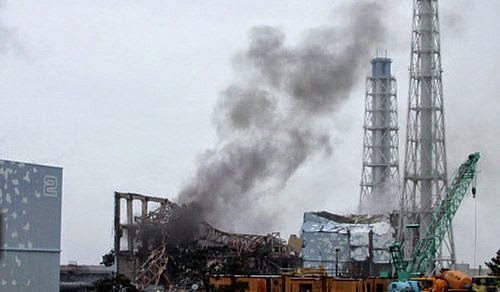 The US Government has been using the actions of Radical Fundamentalists as the cause celebre for starting wars. Going backwards in time, just to name a few we have had ISIS, ISIL, Al Qaeda, Boko Haram, Hamas, Hezbollah, the PLO, all of whom were used as targets by our government for the excuse of war. But there is one terrorist organization not on any list and they are responsible for the death of at least, by the accounts we can surmise, far greater than one million people and their name is the Nuclear Terrorist Organization or NTO.

The Nuclear Terrorist Organization has cells in many countries with the main branch and leaders in the United States. Each cell has a different name, each one unique to its own killings: TEPCO, Areva, Duke, GE, Dominion, Westinghouse, Energy NW, Sellafield, Cameco, Nukem (yes, their real name from Germany), and these are just a few. The Nuclear Terrorist Organization has cells in Australia, Argentina, Belgium, Brazil, Canada, India, China, Czech Republic, Finland, France, Germany, Italy, Japan, Kazakhstan, Korea, Namibia, Netherlands, Russia, Spain, South Africa, Sweden, Switzerland, the UK, Uzbekistan, Israel and of course, the USA.

Radical: That which is new and different from the ordinary.

Never has there been a time when a terrorist group not only had enough ammunition to kill every living being on this planet, but was also using their ammunition to do just that! And they are still getting away with it! The Nuclear Terrorist Organization is making a grand attempt to kill the planet, to make our planet absolutely uninhabitable for millions of years to come. That is radical! This is not a religious war. This is however, a war of the zealots, cashing in the Earth for dominance, power and greed where there is such blindness as to not see that the end for one is the end for all.

Radical is not just about some US paid Jihadist in the Middle-East, someone we created, to help the Cheneys and the Haliburtons and the Bechtels stay in war. No, the real radical IS the US Government and its role in creating the largest terrorist organization in the world, the NTO. And who pays for that movement? You do. You get cancers and you die. You pay to clean up their messes even thought their messes are intentionally made to be unattainable for any kind of cleanup imaginable. You pay the leaders of the Nuclear Terrorist Organization through your electrical bills and you pay them with your death. So clean. So easy. Or is it? The seriousness of the nuclear situation and NTO is far greater worth a discussion and a firm response than your desires to just call it ridiculous. I pose this one question to you: if nuclear power is so safe, why have an evacuation plan? The fact is even our so-called evacuation plans lack any real form of muster, their designations to narrow and the plans, a joke in the case of traffic in NYC needing to evacuate a disaster at Indian Point. Again, the NTO are fully aware of what they are doing. Greed. Hubris. Idiocy. Psychotic.

The Propaganda Campaign from the Nuclear Terrorist Organization was in full-tilt boogie following the bombings in Japan. The education put forward was Duck and Cover and Atoms for Peace. And you bought it. You were told that you were protected because the Atom Bomb is so effective at killing tens of thousands of people! Why would you feel protected by that? Yes, the NTO had you in the palm of their murderous hands. Like a victim of a hostage situation, you believed your were safe if you believed your victimizer. And as a gift for your loyalty, the NTO was going to give you nuclear power! Now you could read by the light of nuclear powered electricity to your two children and wish them sweet dreams as they drifted off to sleep.

Just a few decades later, Three Mile Island melted down. You blinked. But the Nuclear Terrorist Organization kept on keeping on. They didn’t tell you they had been experimenting with peoples lives during what they called The Green Run at Hanford in Washington State when they intentionally let radiation loose into the winds to see how sick people would get and later die due to the radiation released. They kept that their little secret. And people did get sick. And people did die. And you still don’t know of the Green Run.

Not too long after TMI, Chernobyl blew up and radiated the planet. Maybe the NTO thought that would be it and the game over. The accident was deemed a human mistake rather than seen as part of the terrorist plan to end all life on Earth via the Nuclear Terrorist Organization. These are terrorists who are on a mission. If they need you to feel safe in order to fulfill their mission, then they will do every thing under the sun to keep you feeling safe except of course, for harnessing the power of the sun. Chernobyl was a great notch on their belts. Over 1 million people and counting have died from that one.

When Fukushima had its triple meltdown in March of 2011, you blinked again but the NTO was even more ready for you this time. They threw you a safety blanket to keep you secure but made sure not to give you on the West Coast, Iodine Tablets. But no loss for you…just some thyroid cancer and leukemia for the most vulnerable among us; the children and the females would suffer first.

In the US, they gave you new leaders to listen to who would re-assure you that nuclear was the saving grace to all of climate change problems. Bill McKibben became your Guru. He is a leader in the Nuclear Terrorist Movement. You still can’t face the facts because you are cloaked in the robes the NTO gave you to wear. You use their language. They inhabit your minds. They feed you the lies you put forward and you pay them back both in your silence and ignorance and with your checkbooks and bank accounts. And let’s not forget, in death. The Nuclear Terrorist Organization is killing you and you are paying them to do so.

So you want a Revolution?

To create a revolution, you have to be a revolutionary. You have to think like someone who has nothing left to lose. Do you have what it takes to topple the Nuclear Terrorist Organization? Or would you prefer to do nothing? You’ve been doing nothing for a very long time, especially under the deceptive work of Bill McKibben steering you away from all thoughts of shutting down nuclear.

Who and what are we facing?

A Nuclear Terrorist Organization that calls what it does peaceful while it doses you day in and day out with harmful ionizing rays of low-level radiation causing cancers and heart disease, leukemia and brain masses is really the devil in disguise. Are you up for the battle? Or should we continue to let them lead us into the valley of death? There is no gold at the end of plank, just the nuclear abyss.

So when you follow Bill McKibben or any other so-called environmental leader, see if they are part of the Nuclear Terrorist Organization before you shake their hand. I’d just as soon spit on his.

And for those of you who still don’t understand why the Nuclear Terrorist Organization exists, it exists simply to get rich and to kill you. Can you really accept that your death is just an unintentional casualty of their profiteering? There is no punishment for the NTO. They made sure of that when they turned it into a law stating that they can’t be sued by you and by me. With each and every nuclear disaster they have caused, they have succeeded with their death mission and yet we drift more deeply into a somnambulist state egged on by their absolutely perfect propaganda campaign. WAKE UP!

We have been a society of somnambulists for too long and waking to the end game is beyond a drag. It is painful. But due to climate change, we are now witnessing a planetary devastation unlike anything we’ve ever seen and the last I looked, Noah is not knocking on doors to collect us two-by two for his great Ark.

So why not make the journey into the sixth extinction less painful? Why not shut down nuclear power to prevent nuclear meltdowns in the process of our demise? Are you rendered immovable because you see this as David v. Goliath? There’s no time for fear, people. Goliath is the terrorist and the terrorist can be defeated.

Let him continue and he defeats us. He is winning. Walk with those of us who are working at shutting down nuclear power. Just by reducing your household energy consumption you ARE fighting these Nuclear Terrorists! Don’t you see? They want you to think they are invincible. They are not. Let us join together to annihilate the Nuclear Terrorist Movement. Death to the Nuclear Terrorist Organization comes when you simply unplug from their main artery and make the switch to the real alternatives in green energies. We can do that today but not until you are ready to say goodbye to your Terrorist leaders.

In the days to come, we will see many more nuclear power reactors around the world freeze out, dry out, burn out, flood out and crack out of the safety net you have been led to believe exists. We will see in the dawn of wakefulness, a recognition that the cancers of your family members and friends does have a cause and that cause is in large part, due to man-made ionizing radiation. In that moment of rubbing sleep from your eyes, you will see that even many of your environmental leaders have marched you out on the plank in their own search for gold, feeding you to the gods of death as they picked your pockets clean.

Miriam German is the director of RadCast.org. She founded No Nukes NW in 2012.

Posted by seemorerocks at 14:20