"We don't want to scare everybody, but we are preparing for full-scale war," warns Vadym Prystaiko - Ukraine's deputy foreign minister - telling CBC during a stunning interview that"what we expect from the world is that the world will stiffen up in the spine a little."Demanding that West provide 'lethal weapons' Prystaiko rages "everybody is afraid of fighting with a nuclear state. We are not anymore." Coming just a week after the Minsk Summit 'peace' deal and with Germany having warned they are likely unable to stop arms being supplied to Ukraine, Prystaiko concludes, "we would like [The West] to send lethal weapons to Ukraine... weapons to allow us to defend ourselves."
----Zero Hedge

Vadym Prystaiko, now deputy foreign minister, calls on the West to 'stiffen up in the spine' 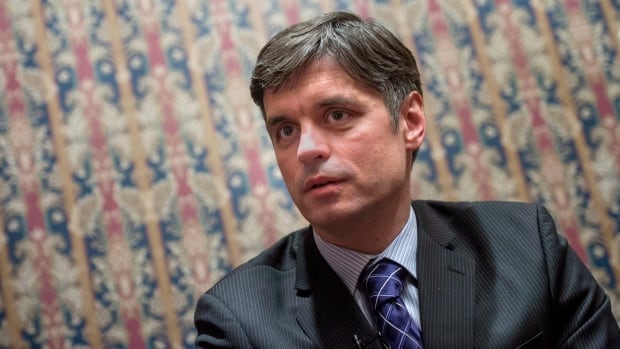 Vadym Prystaiko, Ukraine's deputy foreign minister and the former ambassador to Canada, says Russian President Vladimir Putin must be stopped, for the sake not just of Ukraine but also Europe and Russia as well. (Justin Tang/Canadian Press)

Ukraine's deputy foreign minister says he is preparing for "full-scale war" against Russia and wants Canada to help by supplying lethal weapons and the training to use them.

Vadym Prystaiko, who until last fall was Ukraine's ambassador to Canada, says the world must not be afraid of joining Ukraine in the fight against a nuclear power.

In an interview with CBC Radio's The House airing Saturday, Prystaiko says the ceasefire brokered by Germany and France was not holding.

"The biggest hub we ever had in the railroad is completely destroyed and devastated," he told host Evan Solomon about Debaltseve, captured by Russian-backed rebels after the terms were to have taken effect earlier this week.

"We see that they are not stopping," he says, suggesting the fight was now heading south to the port of Mariupol.

"It doesn't take a genius to see what they are trying to do.… They are taking more and more strategic points."

The former ambassador was in the room during the attempts to broker a political solution with Russian President Vladimir Putin in Minsk.

"Personally I don't trust him," he says. "You look at him and you think, 'Are you serious?'"

"Nobody knows what is going on in his head. I believe he is becoming very emotional [over the two countries' historic ties]," he suggests, calling Putin's intentions "difficult to predict."

Prystaiko echoes the view German Chancellor Angela Merkel is said to have expressed to U.S. President Barack Obama privately a year ago: "He is rational in his own way. He is in some parallel universe ... and he sees differently than everyone else."

'We have to do something'

"The stakes are really high," Prystaiko says, pointing out that Ukraine has now closed its border crossing with Russia. "We don't want to scare everybody, but we are preparing for full-scale war."

What to do in the face of such a threat? For starters, get over your fears, he says.

"What we expect from the world is that the world will stiffen up in the spine a little," he says. "Everybody is afraid of fighting with a nuclear state. We are not anymore, in Ukraine — we've lost so many people of ours, we've lost so much of our territory.

"However dangerous it sounds, we have to stop [Putin] somehow. For the sake of the Russian nation as well, not just for the Ukrainians and Europe."

Prystaiko says Ukrainians are blunt when it comes to what they need.

"We would like Canada to send lethal weapons to Ukraine," he said. "Weapons to allow us to defend ourselves."

Canada has been helping to train Ukrainian soldiers for the last decade, but it isn't enough, he says.

"It wasn't on the level that would help our army [against an] invasion."

Ukraine wants weapons, and training to use them, he said.

His country has received all the non-lethal assistance Canada pledged, with the exception of new radar technology which is "in the final stages," he says.

Defence Minister Jason Kenney emphasized at a defence conference Thursday in Ottawa that the radar capabilities would not be used for targeting potential strikes against rebel forces.

He also said last weekend on The House that Canada doesn't have large stockpiles of weapons to give, although it could acquire some from other vendors and then supply Ukraine.

Beyond weapons, Prystaiko emphasized the importance of financial assistance, including a package on its way from Canada and Japan.

"Don't forget that the infrastructure in Donetsk is already devastated. We've lost at least 20 per cent of the industrial [output] of Ukraine. We've had to close the market with Russia, which is a third of our exports and imports.

He says Canada has been helpful by taking "probably the most staunch position" and talking to its allies.

"It's a big change for Europe," he says, where neighbouring countries feel scared.

But he doesn't hold back from calling on Ukraine's Western allies to step up, echoing the frustration he expressed last November over Canada's willingness to intervene in Iraq but not send troops to help Ukraine.

"I was quite blunt … and probably it was premature at that point but now I have to ask again: If we see the same sort of rebels coming towards central Ukraine, towards other cities, how much is different from what we see in Iraq and the international help which was coming?"

"Unfortunately, we will probably pose a very serious question for the rest of the world: How can we react to this new challenge? We haven't had it for 50 years in Europe. Now it's back again."