There appears to be an effective news blackout on this in the western media.
Ukraine To Halt Currency Trading Again Any Minute
Zero Hedge,
26 February, 20145

With Prime Minister Yatsenyuk putting his foot down and squeezing the central bank to lift capital controls, Ukraine's currency is totally collapsing this morning. Up over 5 handles to a fresh record low of 33.75/USD, we suspect currency trading will be halted any minute. While we discussed the endgame for Ukraine last night, on the street, things are dire with ATM lines, shelves emptied, and local currency exchanges marking up levels dramatically more than the 'official' rates...
The 'independent' Central Bank halted currency trading, and then the government screamed...


"I learned this morning on the Internet that the National Bank of Ukraine has, as usual on its own without any sort of consultations, made the decision to close the interbank currency market, which will absolutely not add to the stability of the national currency that the national bank is responsible for. This situation has a very complex and negative influence on the country's economy," Ukrainian Prime Minister Arseniy Yatsenyuk said.

And it was unhalted... and this happened... UAH collapsed...

The picture is significantly worse on the street...


Mariupol exchangers Today the dollar has broken another record. Buy 1 dollar for 44 hryvnia can sell for 32 hryvnia, according to the city's website 0629.com.

Related to this is a panic in the city - in many shops in the city are buying cereals, flour, sugar. By the way, the price of sugar already reached 18 hryvnia per kilogram. "Soon people will buy cookies to drink tea without sugar," - joked seller.

broke the record and the cost of a liter of gasoline - more than 26 hryvnia per liter of A-95.

According to experts, now the price rise for imported goods and products. For example,the city has increased dramatically the cost of a kilogram of herring - up to 60 hryvnia. For the same money you can buy a kilo of meat.

It is noteworthy that the dollar in Kiev a little different - there you can buy a dollar for 36 hryvnia, but also to sell for 32 hryvnia. According to the workers exchangers, such a situation has developed in Mariupol for the area ATO.

with lines at the ATMs 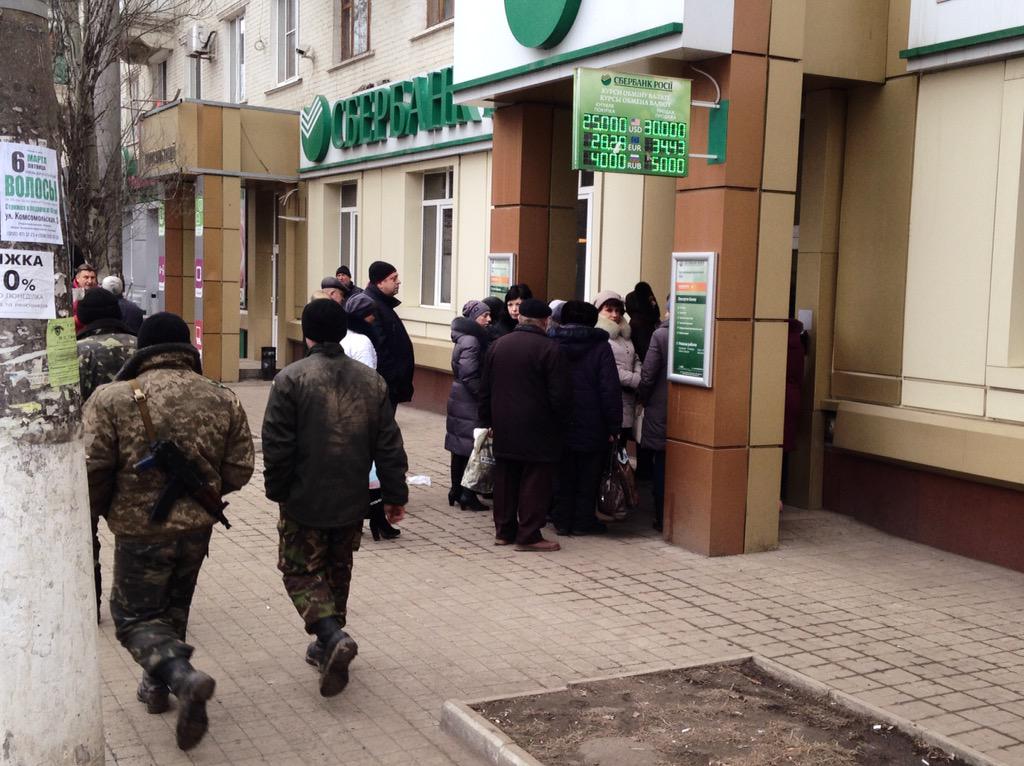 Long lines at banks & ATMs as concerns about currency in #Ukraine grow. @theIRC in Artemivsk
and empty shelves...

Oksana‏@Ksjusha142
Ukraine. The national currency has turned into paper. In Ukraine is a massive grocery psychosis. Photo (Kiev) 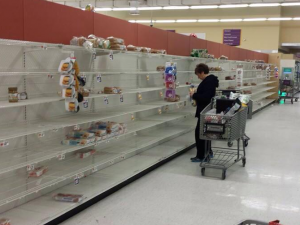 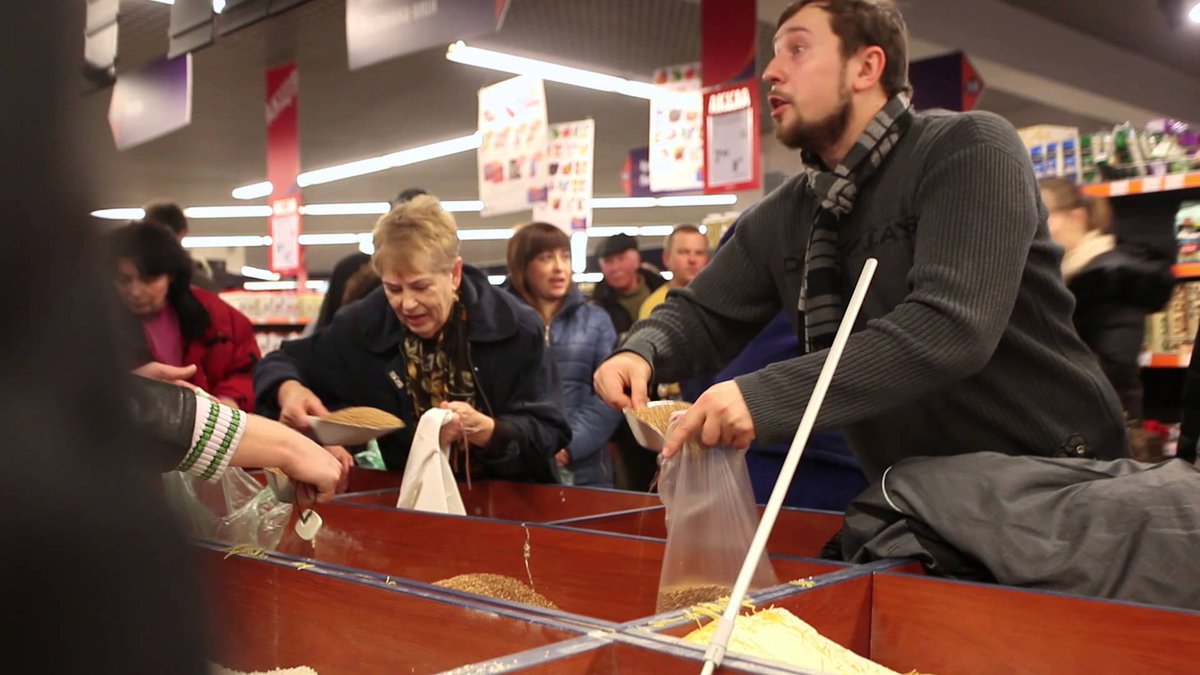 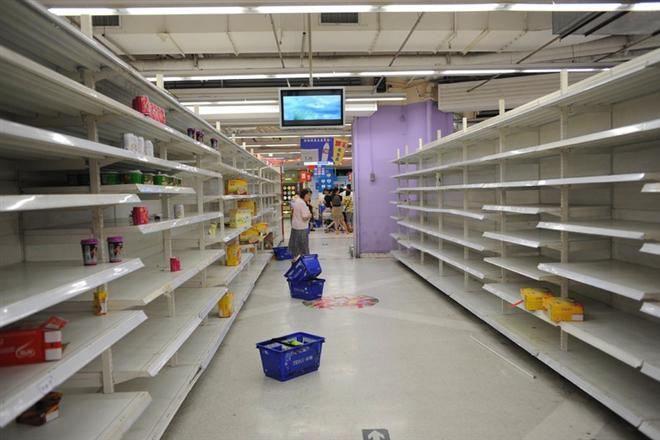 as Ukrainians try to get rid of Hryvnia for real goods.
Alarming Currency Devaluation Provokes Consumer Panic in Ukraine
The rapid devaluation of Ukraine's currency has provoked a "consumer panic" in the country, adding fuel to the fire of the ongoing political and economic crisis. 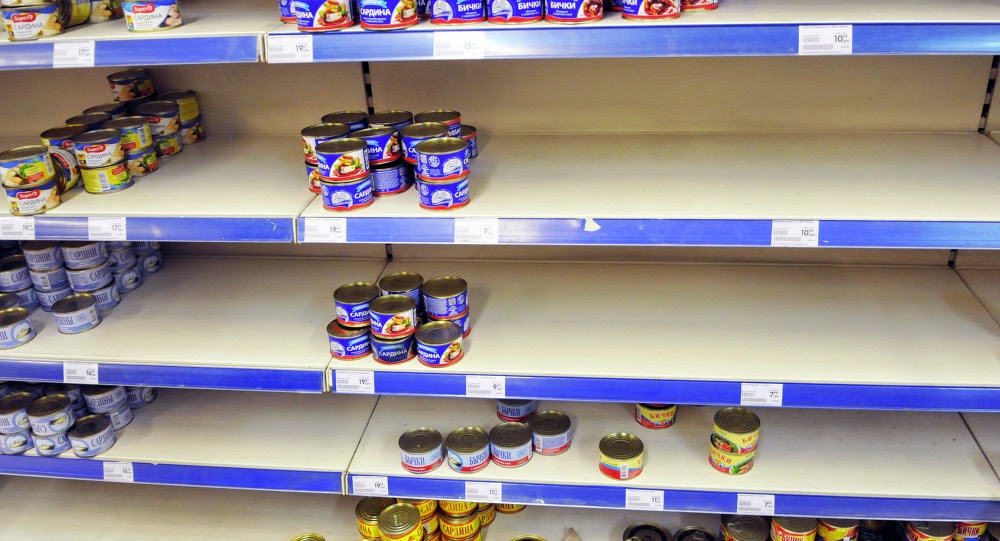 Sputnik News,
26 February, 2015
Ekaterina Blinova – The rapid devaluation of the hryvnia has triggered a panic amongst Ukrainian consumers, prompting people to "storm" supermarkets and pharmacies.

The Ukrainian currency has already lost 70 percent of its value, triggering a "consumer panic" in the country. Ukrainians are stockpiling food and medicine, scouring the shelves for sugar, cooking oil, flour, canned products, cakes and frozen chickens. Most of these products have already disappeared from Ukrainian stores.

Local media outlets depict a gloomy picture of people standing in queues for hours, cursing and jostling each other. The panic has emerged in the last few days in Kiev and other cities of the country: cheap products such as coffee, tea and sunflower oil have vanished from the shelves due to consumer hysteria.

Ukrainian stores have already introduced rationing of basic products in order to reduce the negative impact caused by the nationwide panic. Restrictions have been introduced for goods like cooking oil, flour and sugar; with retailers allowed to sell only two bottles of oil and three to five kilograms of flour and sugar per person.

Experts warn Ukrainian consumers against stockpiling flour and cereals, suggesting that the cost of these products is unlikely to rise drastically. They recommend buying caviar, medicine and alcohol – products which are becoming more and more expensive due to the hryvnia's continuous slide.

Meanwhile, the exchange rate of the hryvnia is falling steadily. The gap between the US dollar and the Ukrainian currency has widened tremendously over the past two days. Banks are currently buying the dollar for 32.8 hryvnias and selling it for 26.5 hryvnias, trying to slow down the speed of the devaluation.

Ukraine is in a deep political and economic crisis, balancing on the brink of default. The hryvnia's sharp devaluation is only adding fuel to the fire, making the prospects of the country's economy bleak and unpredictable. 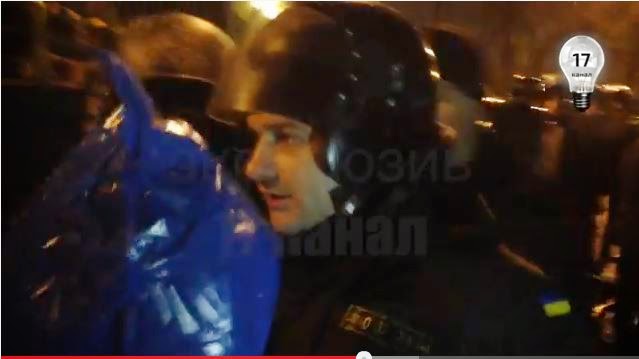 The "Financial Maidan" was a protest staged at the National Bank of Ukraine to protest the crash of the hryvnya and the resulting impoverishment of masses of people. Earlier in the day, Kiev mayor Klichko accused the demonstrators of being "Russian provocateurs" and expressed puzzlement as to why anyone would protest higher utility costs and prices, as well as lower wages. Then he unleashed riot police on the demonstrators. Note that the demonstrators are quite unlike the "European Maidan" ones, in that you don't see masked thugs waving neo-Nazi banners, only ordinary people suffering from the policies of the government. Judging by the high emotions, one should expect a repeat in the coming days. Possibly on a larger sale.

You can sense, however, that European values have taken root in Ukraine! Shortly after the 5:00 mark, one of the police kindly informs the demonstrators that "if anyone hits us, we'll shoot. I'm just telling you." No, there will be none of the Yanukovych-style brutality.

On the other hand, when one of the protesters asks the police "aren't you concerned that what you are doing right now might be declared unlawful by the next government?", the police don't seem to have an answer.. 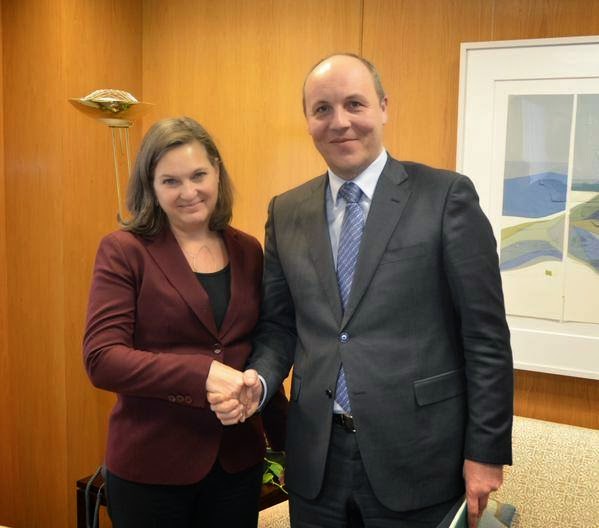 The star crossed lovers: Neocon Nuland met Neo Nazi Parubi. The sparks flew [from the Molotovs]. They couldn't contain their lust. Cookies were in the oven. Months later, the Maidan was born. 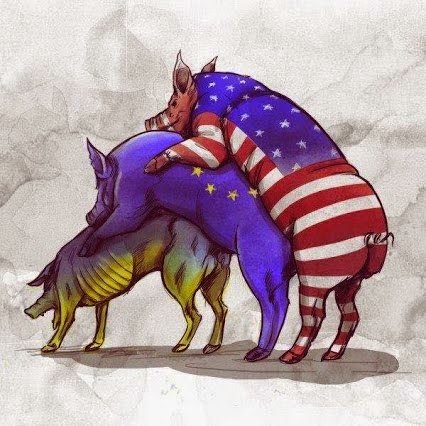 Posted by seemorerocks at 18:15