As Kiev and anti-government forces in eastern Ukraine prepare for heavy artillery withdrawal and prisoner exchanges, the residents of Debaltsevo, the hotspot of the recent fighting, have plucked up courage to walk the streets of their town again.

After the Ukrainian military withdrew their forces “en mass” from war-torn Debaltsevo on Wednesday, the locals, terrified by weeks of shelling, began to crawl out of their bomb shelters, scavenging for what thousands of Kiev troops left behind – personal belongings, food or warm clothes. 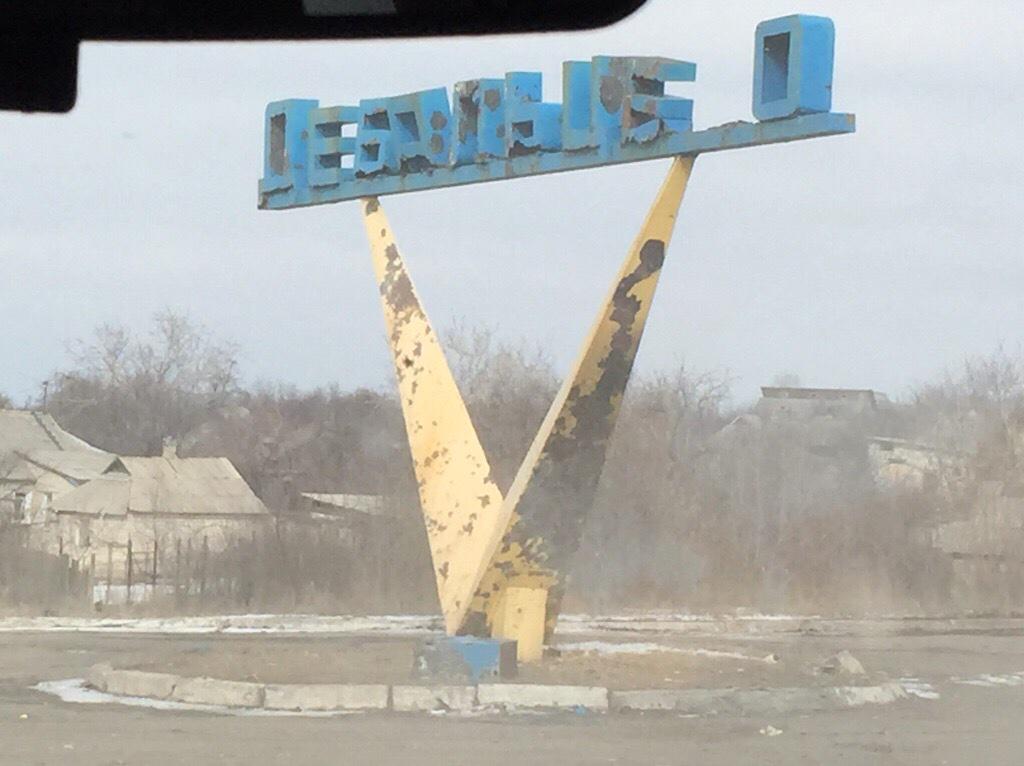 Urban #debaltsevo completely controlled by anti-govt forces. Remaining #ukrainian units outside city.
Residents weren’t prepared to talk to journalists for a while, but when they did it was with long pent-up bitterness.

“We would like to thank Ukraine that it made us homeless, destroyed our homes,” local women tell RT at the abandoned Ukrainian army’s military camp. “We’ve been living in basements since the summer.” 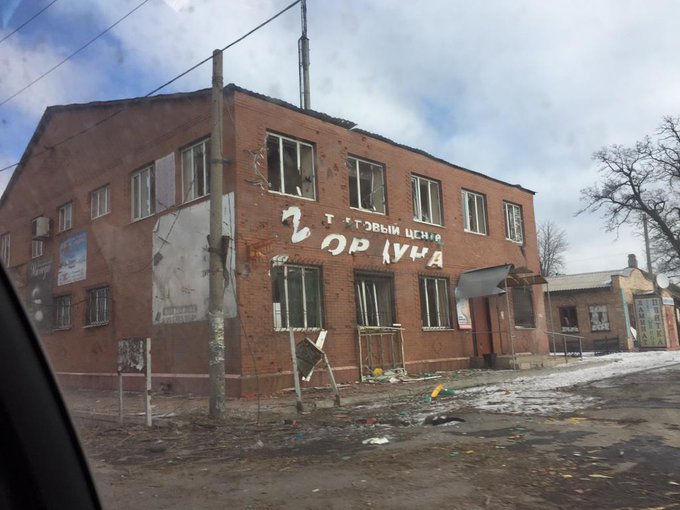 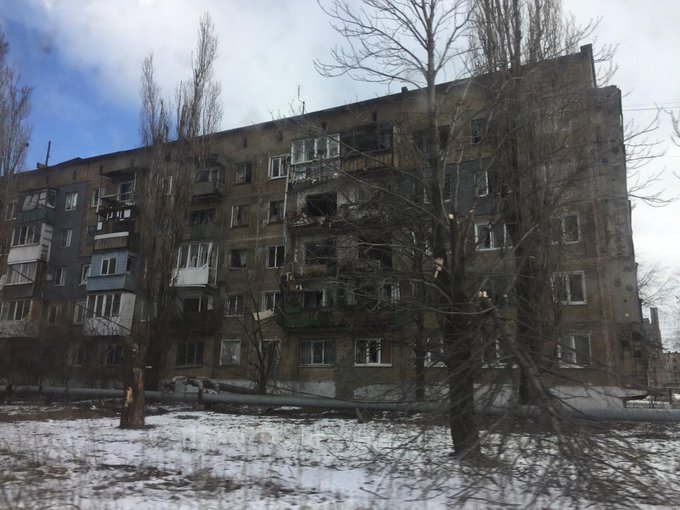 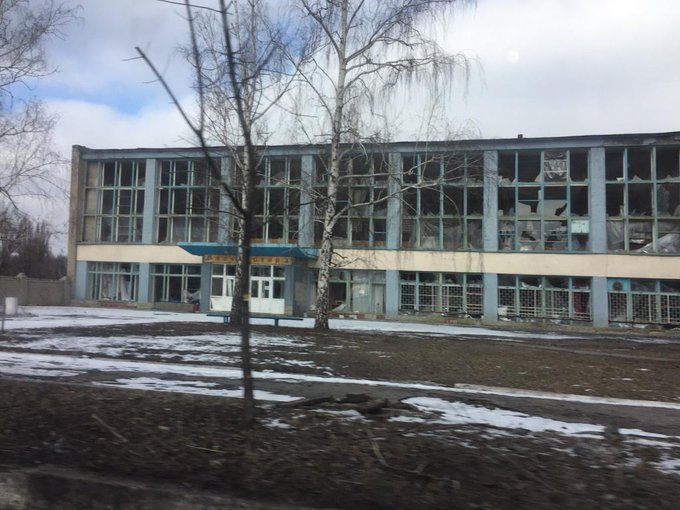 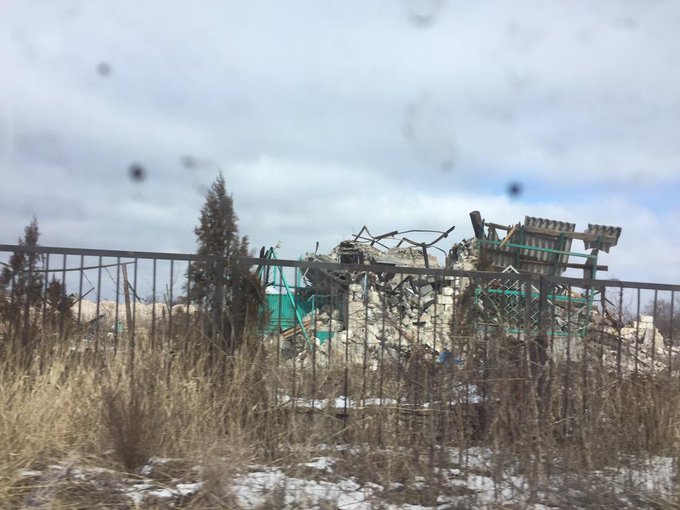 Damage to #debaltsevo simply horrendous. Terrified residents say panicked #ukrainian troops fired blindly
A hospital in Debaltsevo, that served as a barracks for the Ukrainian troops and was also damaged in the street battles, became a shelter for many civilians, who had no desire to leave Donbass in search for a safer life.

“How can a person, who worked all her life, end up in a basement like a rat? I don’t understand how I could be here,” says a woman, who had been surviving in the hospital’s basement. 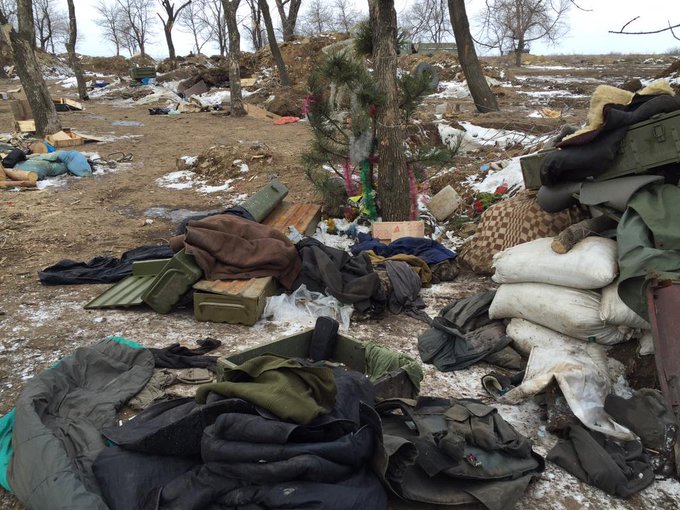 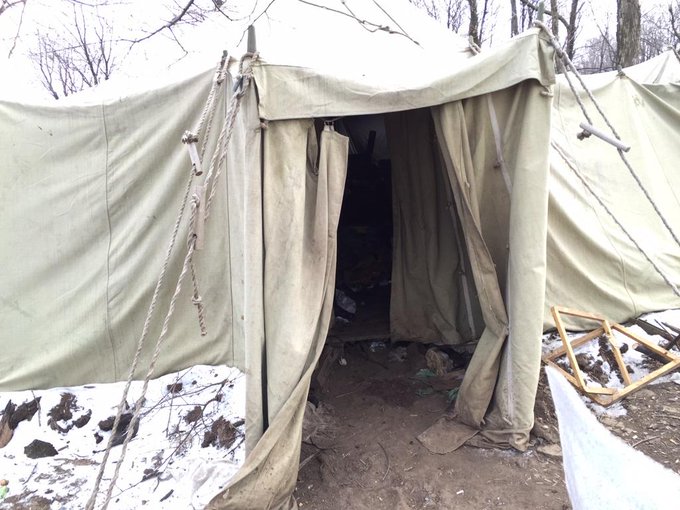 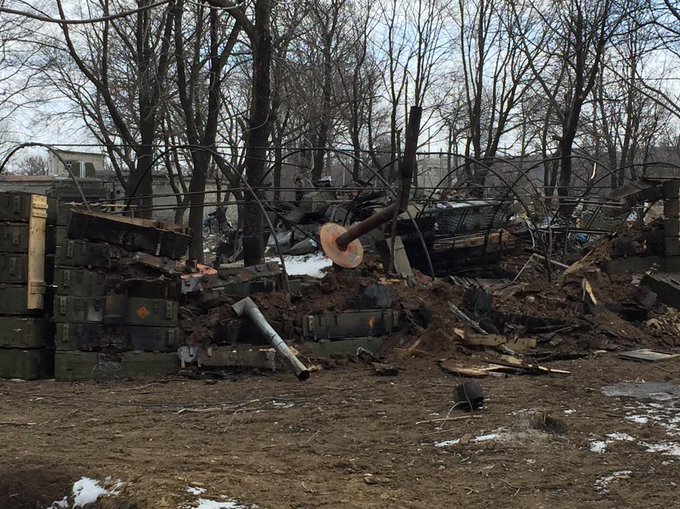 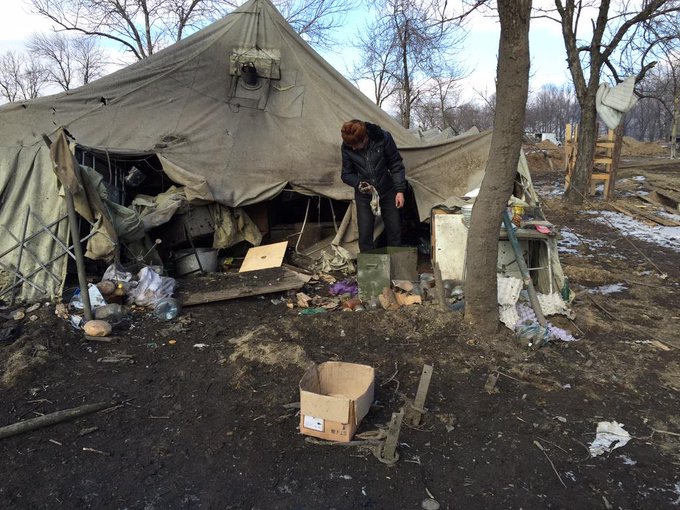 Locals search for food in overrun #ukrainian military camp. It is massive, strewn with ammo and personal belongings

On Saturday, Kiev and anti-government forces in eastern Ukraine are planning to exchange prisoners in a continuing effort to implement the peace deal.

Over a month, the clashes around Debaltsevo claimed the lives of at least 179 Ukrainian soldiers, Yuriy Biryukov, presidential adviser and assistant to the defense minister, said on Friday. Hostages were made of 110 soldiers and 81 are missing, he wrote on his Facebook page. According to self-defense forces estimates, the Ukrainian soldiers’ death toll is nearly 3,000 people. 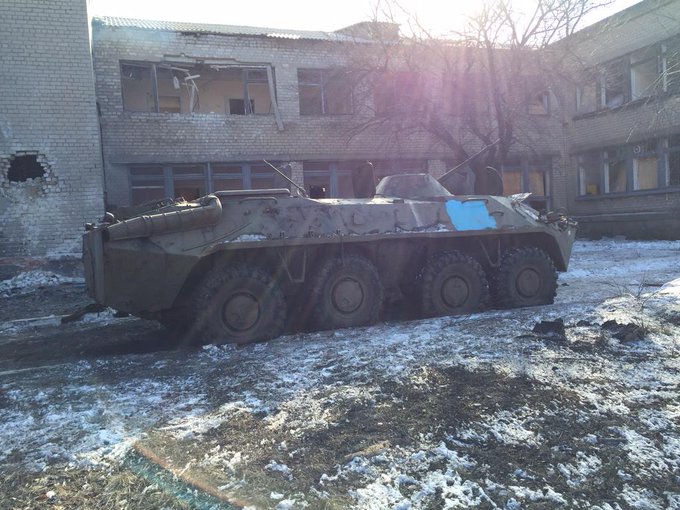 Debaltsevo is a strategic railway hub, connecting the breakaway regions of Lugansk and Donetsk. It remained a battlefield where around 3,000 Ukrainian soldiers were surrounded by Donetsk People’s Republic forces, as the ceasefire failed to put an end to the ongoing violence.


The leaders of Russia, Ukraine, France and Germany agreed the peace deal in Minsk on February 12. To de-escalate the lingering conflict, that has taken at least 5,600 lives, according to the latest UN estimates, it introduced measures such as the ceasefire that started a week ago, a pullout of heavy weapons, and comprehensive constitutional reform by the end of the year.


A 75 year old woman picks up the scattered macaroni left after Ukrainian army in Debaltsevo. The whole war represented in one photo. 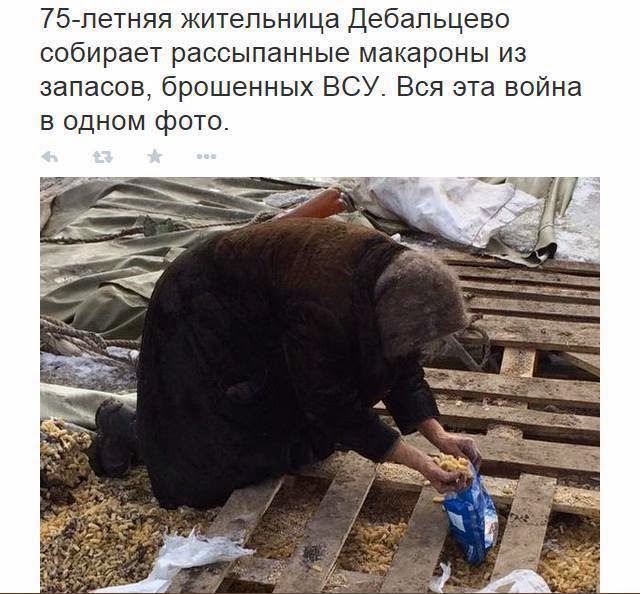 The OSCE monitoring mission in eastern Ukraine has finally arrived in the town of Debaltsevo, after a local militia provided guarantees of security. At the same time Kiev and rebels in Lugansk gave independent reports of prisoner swaps.

Representatives of the OSCE special monitoring mission (SMM) in eastern Ukraine arrived at the town of Debaltsevo in the Donetsk region, the mission's spokesperson Michael Bociurkiw announced on Saturday. Access to the area, which had reportedly been a sticking point at the Minsk peace talks, and which continued to be a scene of fighting between the anti-government forces and Kiev troops, was possible with the militia's guarantees of security, Bociurkiw told Ukraine's 112 tv channel.

Newly arrived armoured vehicles at SMM HQ in Kyiv getting readied for deployment to E Ukraine
The observers arrived at Debaltsevo along with the International Committee of the Red Cross and several trucks, bringing food and medical supplies to the region, the OSCE spokesperson said, adding that its observers are working on a full report on the situation in the region. He also called for all sides to observe the cease fire agreement in all territories in eastern Ukraine and provide access for the mission to all its regions.

Kiev forces allegedly obstructed the OSCE mission's freedom of movement, after keeping the observers at one of the check points some 80 kilometers from Donetsk, RIA Novosti reported. Citing the mission's representatives, it was said that while at one of the check points the observers had to wait for a while to be let through, at the other security point they were denied entry by Ukrainian servicemen, due to lack of travel documents.

Organization · 3,457 Likes
· 5 hrs ·
STATEMENT BY THE CHIEF MONITOR OF THE OSCE SPECIAL MONITORING MISSION TO UKRAINE ON PROCESS OF VERIFICATION OF WEAPON WITHDRAWAL IN EASTERN UKRAINE
I am aware of several reports which indicate that the process of withdrawal of heavy weapons, on which the sides agreed in Minsk, is about to start. In order to verify the withdrawal – to testify to the truth that specific weapons have been and remain withdrawn – the OSCE SMM needs to know what heavy weapons the sides have, where ...
See More
Share · 711

In line with the truce, which was agreed by several world leaders in Minsk last week, the self-proclaimed republics in Ukraine and military officials from Kiev conducted a prisoner of war exchange on Saturday. At least 35 prisoners from each side of the conflict were freed on neutral territory near Lugansk, the self-proclaimed Donetsk people's republic spokesperson told Ria Novosti. The Lugansk militia also reportedly planned to conduct an exchange with the government. Ukraine's President Petro Poroshenko announced the release of over a hundred of Ukrainian soldiers on his Twitter.

139 Ukrainian soldiers have been released from captivity.

Humanitarian aid from Russia was also delivered to the town of Debaltsevo on Saturday, Interfax reported, citing Russia's Foreign Ministry official. Supplies of food, medicine and everyday necessities were delivered to the region with the help of Russia's emergency services

Kiev and the Republic exchanged two hundred prisoners, one soldier of ATO refused to return to Ukraine 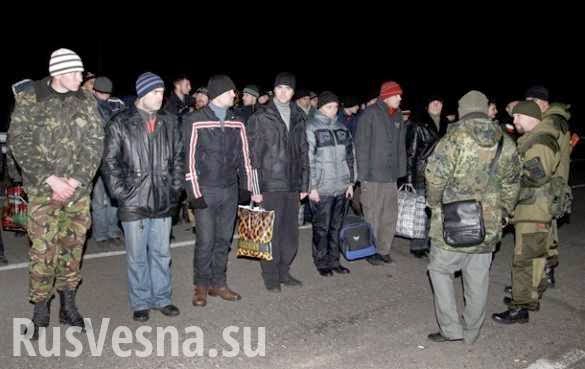 Ukrainian journalist Roman Hnatiuk reported the details of the exchange of prisoners, which took place on March 21.

"A long day. We are retruning wth the exchange of prisoners.

Held "in the fields" for the village Frunze Lugansk region.

Freedom finally! We were weeping for joy when Lugansk militia entered the town" (VIDEO) 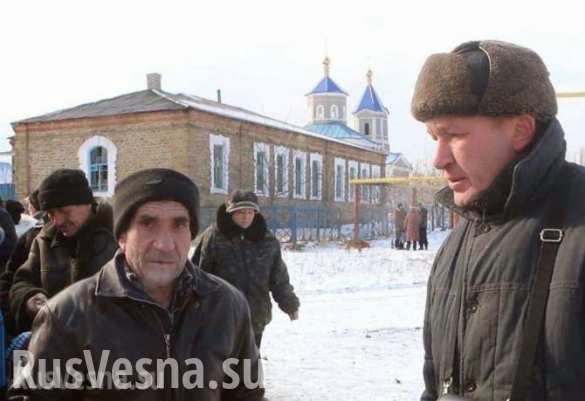 The civilians told what they felt when militia entered Chernukhino: "Freedom finally! Freedom from marauding. The Ukrainian soldiers were brazen: they robbed our basements, took food from us, they stole our cars, just unlocked garages and the cars were gone. Then they were just walking our streets and laughing at our faces. When Lugansk militia came we were weeping for joy".

Novorossia army got a quarter of all heavy equipment and ammo of the Ukrainian army, left in the Debaltsevo qualdron

Weapons delivered to Kiev from abroad do not help Kiev, but end up in the hands of the militia. According to the representatives of Novorossia militia, they got a hold of 25% of all arms that were in the posession of UAF and National Guard.

After the escape of the Ukrainian military from Debaltsevo a lot of military equipment, including foreign, ended up at the disposal of the militia. "The soldiers and junior commanders of NAF want to express special gratitude to the numerous volunteer organizations, who supplied the troops of the junta so well: very popular are the hundreds of night vision devices, digital radios, modern ballistic calculators and fire control devices, dressing and antishock supplies made in the West, Kevlar helmets (although the Russian are better, but still a big deficit), latest generation armor," - said the official representative of the Ministry of Defence of DPR, Vladislav Brig.

Recently NAF presented evidence that the Ukrainian army has NATO weapons. In early February, the Deputy Corps Commander of the Ministry of Defence of DPR, Eduard Basurin showed reporters the shells made in the USA, which were fired on Gorlovka. "A sample of a rocket of 155 mm caliber used by artillery systems of NATO countries", - quoted REGNUM the words of Basurin. "These systems are not in service of the Ukrainian army. This is a special shell of 155-caliber from SAU M109A1 made in the USA. This shell has a bottom detonator. Upon striking a building or structure it gets stuck in the wall and breaks the structure. If it enters inside a building, the blast and shrapnel destroy all living things. The second shell is the unguided artillery system of 75 mm caliber. These artillery shells are also used by NATO countries and are not normally in stock of the Ukrainian army. This shell from the launch rocket systems, which are installed on portable rocket systems, mainly on cars. These systems are widely used in many conflicts: Syria, Iraq, and Afghanistan, and as you can see, began to be used on the territory of DPR. The markings are there, you can see for yourselves" - he told the press.

Nuland, Obama and McCain must sleep very well knowing they spend the American taxpayer money on killing the children of Donbass.
Posted by seemorerocks at 13:18