"Grexit" The can is kicked down the road 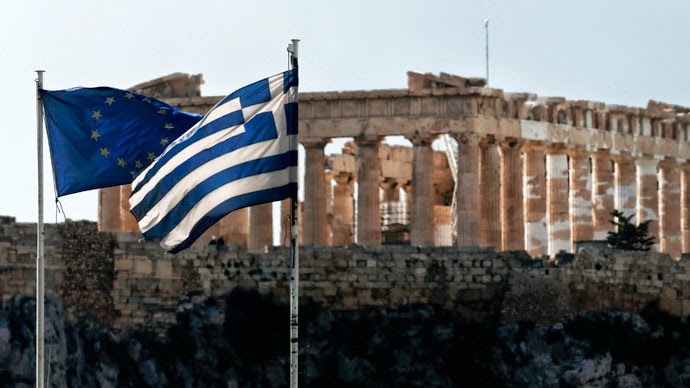 Athens and eurozone finance ministers have struck a deal to extend the Greek bailout by another four months with Greece given till Monday to present a list of reform measures they plan to take to ensure they comply with the conditions.

“It's done! For four months,” one of the officials told AFP right after the meeting in Brussels came to an end. An hour later, the Eurogroup issued a statement confirming the deal.

"The Greek authorities will present a first list of reform measures, based on the current arrangement, by the end of Monday February 23," the statement said.


"The institutions will provide a first view whether this is sufficiently comprehensive to be a valid starting point for a successful conclusion of the review. This list will be further specified and then agreed with the institutions by the end of April."

Athens has confirmed the implementation of structural reforms and its obligations to repay the existing debt, Europgroup representative Jeroen Dijsselbloem. A deal has also been reached to provide financial assistance to Greece, which will have access to the EU financial stability mechanisms during the program to recapitalize banks.

“The four-month period will be a time to rebuild new relations with Europe and the IMF," Greek Finance Minister Yanis Varoufakis told reporters. "Greece has turned the page" and won some time to negotiate a better bailout deal, the official said, emphasizing that Greece had not used any threats or bluffs to reach an interim agreement with the Eurogroup.

European officials told Reuters than the deal was reached during preparatory talks involving the Greek and German finance ministers, as well as the managing director of the IMF. After that, it was agreed on by all 19 members of the Eurogroup.

The EU creditors have insisted that any extension of loans should be accompanied by Greece’s commitment to a certain set of budget measures and reforms.

The newly-elected leftist government in Athens initially asked for a six-month loan extension to get more time to renegotiate its €316 billion debt.
The Friday’s agreement removes the immediate risk of Greece running out of money as early as March, which could’ve possibly resulted in the country’s exit from the eurozone.
Greece’s current bailout loan of €240 billion was agreed by the country’s previous government in back 2012. The harsh conditions of the bailout program, which include cuts in government spending, higher taxes are extremely unpopular in Greece.

Perhaps this explained why Greece and The Eurogroup have (reportedly) come to an agreement to avoid an actual Grexit for 4 months. As Die Welt explains that Euro-area nations will face losses of up to EUR330bn as Greek outright government debt, ECB capital needs, and TARGET2 liabilities have soared in the last 2 years since the crisis last erupted...

While for Greece stakes are high, so does the euro partners have set in the case of a Grexit losses. Grexit is in the capital markets become naturalized name for a Greek euro exit.

All euro countries in Hellas on the various rescue vehicle loans and the ECB, the euro system some 330 billion euros in the fire. This represents about 3.4 percent of economic output in the euro zone. Since the year 2012, the Athens liabilities have increased by 40 billion euros, as the British bank Barclays has calculated.

"What have since the euro countries in the fire, can not be ignored entirely," says Thomas Harjes, a strategist at Barclays. He holds the volume nevertheless manageable, as most Greek debt securities are no longer as from private sources, but the public sector, ie states and their institutions.

*  *  *
So - if this reported 4-month can-kick is 'real - The Eurogroup has that much time to 'manage' this exposure before the Syriza-voting members of the Greek public turn to the only anti-EU partyt left - Golden Dawn... and Podemos elections begin in Spain..


Does Germany really want to negotiate with Golden Dawn

Reforms "The Deal Is Dead

As usual, the fine print of any European "deal" is revealed not only after the agreement, but after the US market close. So for all those waiting for the real punchline, here it is - it also is the reason why Greece got until Monday to reveal the list of "reforms" it would undertake:

"We’re in trouble next week if creditors don’t accept Greece’s reforms", Greek Finance Minister Yanis Varoufakis says. "If our list of reforms is not backed by the institutions, this agreement is dead and buried."

That's bad. But... "But it’s not going to be knocked down by the institutions."

For his sake, let's hopes he is correct in predicting what the Troika, pardon, Institutions will do. Because this is precisely what Schauble meant when he said that the "Greeks Certainly Will Have A Difficult Time To Explain The Deal To Their Voters": under the conditionality of the Troika's approval, the Tsipras government now has to walk back essentially all the promises it made to the Greek people - promises which by some accounts amount to over €20 billion in additional spending - or the Troika, pardon Institutions, will yank the entire deal and the Grexit can then commence.

And that's the bottom line.

It's also the reason Schauble was gloating: because he gave the Greek government just enough rope with which to hang itself.

Then again, if and when the Tsirpas government is booted out next once the Greek euphoria turns to disgust and disillusionment, does Germany really want to negotiate with Golden Dawn instead?