Questions about the vote in New Zealand

Questions are being asked about the election and a petition is doing the rounds.

This petition is awaiting approval by the Avaaz Community

Why this is important to me

Something doesn't seem right with recent the New Zealand election. Evidence of fraudulent voting and it makes no sense that people would local vote left and party vote right. Is this another case of Electoral Fraud?

There were 3 096 247 registered voters: - This article on Stuff puts the voter turnout at roughly 77%

- Despite record scandals for the incumbent government, the vote on the right was virtually unchanged from the last election and, in fact, bucked the tend for a party seeking a third term to get relatively lower support than the previous election. -Polling suggesting the Greens would get 13+% of the party vote were quite out of wack

-Several electorates which voted for a Labour MP, appeared to favour National with their party vote, which is highly unlikely. - Hone Harawira losing his seat is a tough one to call as all parties called for their faithful to back Labour, and the small margin in the vote could have been caused by this

- However, it is very difficult to believe that Hone Harawira wouldn't have increased his popularity since the last election as he doggedly stood up for the people of his electorate.

-It is almost impossible to believe that Mana Internet got only 1.3% of the party vote. While Mana's tie up with the Internet party was pretty wonky, Mana themselves ran a good campaign and had some excellent candidates, and a leader who always came across well in multi-party television events.

-Two days ago right wing blogger, David Farrar, posted his prediction of the election results based on aggregates of polls. Now you would expect his prediction to favour National, but even his prediction placed National with 58 seats, the Greens with 16, and Internet Mana with 2. Now how could 3 seats move from the left side of the house to the right (one of them moved to New Zealand First which could easily have happened as a result of Winston Peters magnetic powers).

Anyway, please test out the maths and figures, and add your own thoughts - also have to wait for the specials to be counted as that may change the picture slightly. If there are 300,000 special votes, that could change the picture dramatically.... 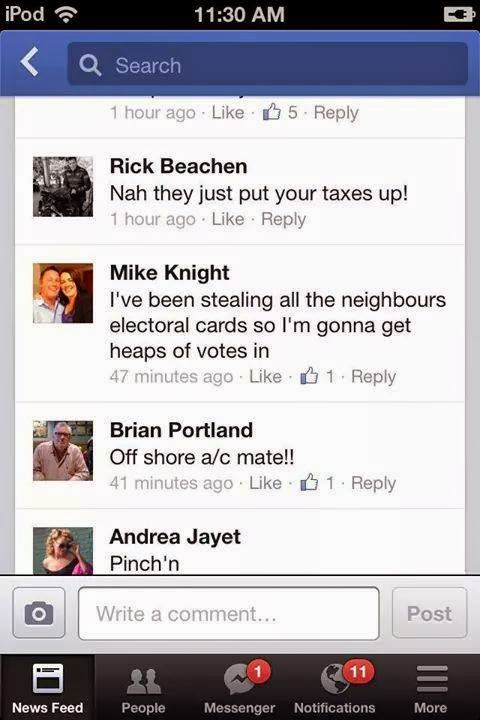 Posted by seemorerocks at 22:41