The Nail In The Petrodollar Coffin: Gazprom Begins Accepting Payment For Oil In Ruble, Yuan 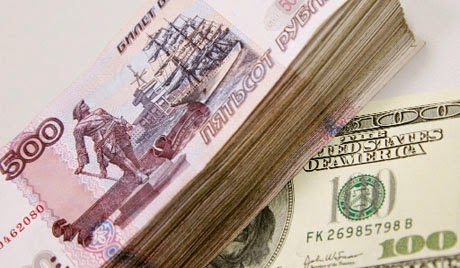 Several months ago, when Russia announced the much anticipated "Holy Grail" energy deal with China, some were disappointed that despite this symbolic agreement meant to break the petrodollar's stranglehold on the rest of the world, neither Russia nor China announced payment terms to be in anything but dollars. In doing so they admitted that while both nations are eager to move away from a US Dollar reserve currency, neither is yet able to provide an alternative.

This changed in late June when first Gazprom's CFO announced the gas giant was ready to settle China contracts in Yuan or Rubles, and at the same time the People's Bank of China announced that its Assistant Governor Jin Qi and Russian central bank Deputy Chairman Dmitry Skobelkin held a meeting in which they discussed cooperating on project and trade financing using local currencies. The meeting discussed cooperation in bank card, insurance and financial supervision sectors.
And yet, while both sides declared their operational readiness and eagerness to bypass the dollar entirely, such plans remained purely in the arena of monetary foreplay and the long awaited first shot across the Petrodollar bow was absent.
Until now.
According to Russia's RIA Novosti, citing business daily Kommersant, Gazprom Neft has agreed to export 80,000 tons of oil from Novoportovskoye field in the Arctic; it will accept payment in rubles, and will also deliver oil via the Eastern Siberia-Pacific Ocean pipeline (ESPO), accepting payment in Chinese yuan for the transfers. Meaning Russia will export energy to either Europe or China, and receive payment in either Rubles or Yuan, in effect making the two currencies equivalent as far as the Eurasian axis is conerned, but most importantly, transact completely away from the US dollar thus, finally putin'(sic) in action the move for a Petrodollar-free world.
More on this long awaited first nail in the petrodollar coffin from RIA:
The Russian government and several of the country’s largest exporters have widely discussed the possibility of accepting payments in rubles for oil exports. Last week, Russia began to ship oil from the Novoportovskoye field to Europe by sea. Two oil tankers are expected to arrive in Europe in September.
According to Kommersant, the payment for these shipments will be received in rubles.
Gazprom Neft will not only accept payments in rubles; subsequent transfers via the ESPO may be paid for in yuan, the newspaper reported.
According to the newspaper, the change in currency was made because of the Western sanctions against Russia.


As a protective measure, Russia decided to avoid making its payments in US dollars, which can be tracked and controlled by the United States government, Kommersant reported.

"Protective measure" meaning that it was the US which managed to Plaxico itself by pushing Russia to transact away from the US Dollar, in the process showing the world it can be done, and slamming the first nail in the petrodollar's coffin.
This is not surprising to anyone who has been following our forecast of the next steps in the transition from the Petrodollar to the Gas-O-Yuan. Recall from April:
The New New Normal flow of funds:


And all of this with the US banker cartel completely disintermediated courtesy of the glaring absence of the USD in any of the above listed steps, or as some may call it: from the Petrodollar to the Gas-o-yuan (something 40 central banks have already figured out... just not the Fed).

Still confused? Then read "90% Of Gazprom Clients Have "De-Dollarized", Will Transact In Euro & Renminbi" for just how Gazprom set the stage for the day it finally would push the button to skip the dollar entirely. Which it just did.
In conclusion we will merely say what we have said previously, and it touches on what will be the most remarkable aspect of Obama's legacy, because while the hypocrite "progressive" president who even his own people have accused of being a "brown-faced Clinton" after selling out to Wall Street and totally  wrecking US foreign policy abroad, is already the worst president in a century of US history according to public polls, the fitting epitaph will come when the president's policies put an end to dollar hegemony and end the reserve currency status of the dollar once and for all, thereby starting the rapid, and uncontrolled, collapse of the US empir
To wit:

In retrospect it will be very fitting that the crowning legacy of Obama's disastrous reign, both domestically and certainly internationally, will be to force the world's key ascendent superpowers (we certainly don't envision broke, insolvent Europe among them) to drop the Petrodollar and end the reserve status of the US currency.

As of this moment, both Russia and China have shown not on that it can be done, but it is done. Expect everyone to jump onboard the new superpower axis bandwagon soon enough.