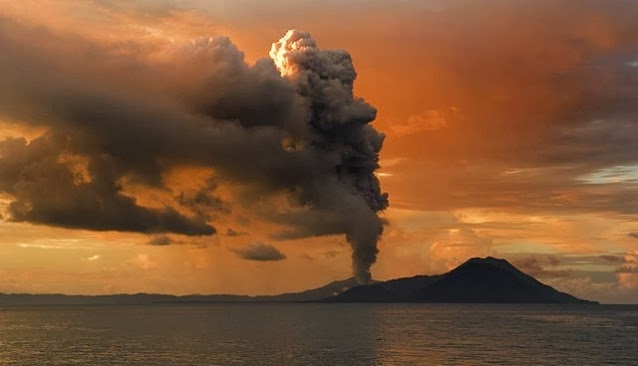 How much faster would surface temperatures be warming if not for various (mostly) natural cooling factors? That’s a question raised by the umpteenth study revealing climate models have been under-representing key factors — in this case small volcanic eruptions since 2000 — that appear to slow the rate of surface temperature warming.

We know from a major December study by Cowtan and Way that surface temperatures have not in fact slowed down. The apparent slowdown is largely due to the fact that we don’t have permanent weather stations in the Arctic Ocean — the place where global warming has been the greatest. So the UK’s Met Office decision to use date that excludes this area has led to a lowballing of actual temperature rise. 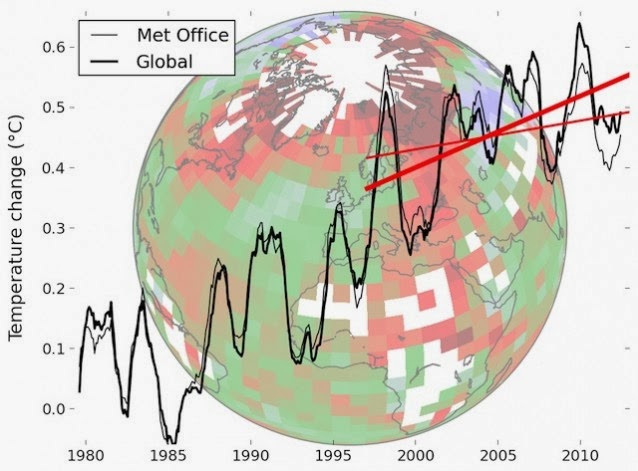 The corrected data (bold lines) are shown compared to the uncorrected ones (thin lines). Via RealClimate.

This is especially worrisome because several recent studies have found factors that are keeping surface temps from warming even faster — which means when these factors abate, accelerated warming will return with a vengeance, like a climate boomerang. As a recent study of the impact of anomalous trade winds concluded, when those winds stop boosting ocean warming, “global temperatures look set to rise rapidly.” 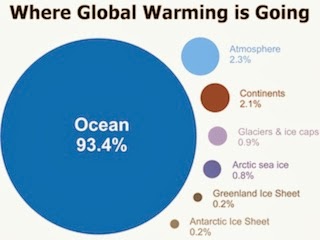 It bears repeating that more than 90 percent of human induced planetary warming goes into the oceans, while only 2 percent goes into the atmosphere. And we’ve seen rapid warming in the places where the vast majority of warming goes, as I wrote in my September post, “Faux Pause: Ocean Warming, Sea Level Rise And Polar Ice Melt Speed Up, Surface Warming To Follow.”

I asked one of the leading experts on ocean warming what his view of the so-called pause or hiatus was. Prof. John Abraham, who led a team of 28 authors in a recent review article on the subject, told me:

My position is that there is no slowdown in global warming. You just cannot look at this (slide 2) http://www.nodc.noaa.gov/OC5/3M_HEAT_CONTENT/ And tell me there is a slowdown. 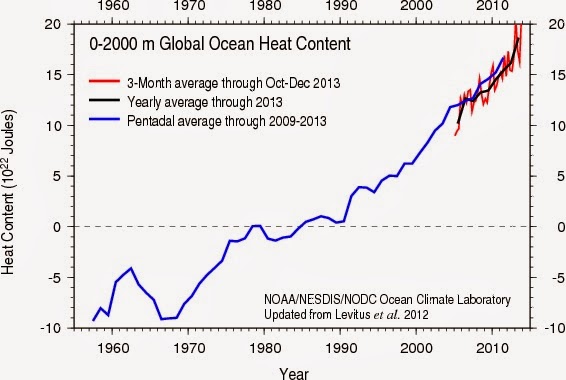 Certainly I think there are three issues at play. First (largest issue) is that there is a transfer of heat from the atmosphere to the oceans, which have slowed surface temperatures over the past decade. There is also the issue of coverage of measurements (Cowtan and Way). Finally, there is a small but not negligible impact of aerosols (both human and volcanic). But, despite all this, the earth is heating at an enormous rate, as measured by the increase thermal energy of the oceans.

When there is a La Nina (we’ve had a bunch recently), heat is taken up by the oceans but extra heat is re-released during El Nino. So, we can expect that the next El Nino will result in record surface temperatures. Of course, this doesn’t prove global warming — we proved that years ago.

Indeed, the earth’s ongoing rate of warming is a staggering “400,000 Hiroshima Bombs A Day“! And there appears to be between a 50% and 75% chance of an El Niño as soon as this summer.

But the larger point is that surface temperatures haven’t really slowed down, so it seems entirely possible that very soon they will be joining the other key indicators that are actually accelerating.

Manmade aerosols from coal plants in China, for instance, have “doubled in just four years, and they were using plenty to begin with,” according to the lead author of a 2011 study, who added “there could be a big increase in warming” just from China cleaning up its smokestacks with scrubbers.

And finally we have this new study on volcanic aerosols since 2000, led by Lawrence Livermore National Laboratory (LLNL). Researchers found that relatively small volcanic eruptions have cumulatively had a large enough cooling impact that they should not be ignored in the models as they have been.

Volcanic eruptions inject sulfur dioxide gas into the atmosphere. If the eruptions are large enough to add sulfur dioxide to the stratosphere (the atmospheric layer above the troposphere), the gas forms tiny droplets of sulfuric acid, also known as “volcanic aerosols.” These droplets reflect some portion of the incoming sunlight back into space, cooling the Earth’s surface and the lower atmosphere.

“In the last decade, the amount of volcanic aerosol in the stratosphere has increased, so more sunlight is being reflected back into space,” said Lawrence Livermore climate scientist Benjamin Santer, who serves as lead author of the study. “This has created a natural cooling of the planet and has partly offset the increase in surface and atmospheric temperatures due to human influence.”

So if we enter an extended period without major volcanoes or a significant number of smaller ones, then, once again, we can expect accelerated warming.

Those who point to the faux pause as a reason for delaying action on climate change have it backwards. Recent planetary warming hasn’t slowed down, and to the extent surface temperatures have been affected, we should be anticipating a boomerang period of sped up warming within a decade or so. The time to act was a long time ago, but now is infinitely better than later.