Gorbachev: Bulldoze EU & US aides from Ukraine and let the people decide

The EU's foreign policy chief Catherine Ashton is visiting Kiev to meet the new interim leadership. She's there to discuss measures to keep the country afloat as reports emerge that the Ukrainian treasury is empty.

The EU has already pledged to provide Ukraine with 20 billion euro once a new government is formed. That's after the International Monetary Fund confirmed its commitment to provide Kiev with financial support.

Mikhail Gorbachev, the former president of the Soviet Union thinks that the West should let the people of Ukraine decide their own political future.

Russia has lashed out at the new regime in Kiev, accusing it of using “dictatorial” and “terrorist” methods to suppress dissent in the country, with backing from the West which is “acting out of geopolitical self-interest.” 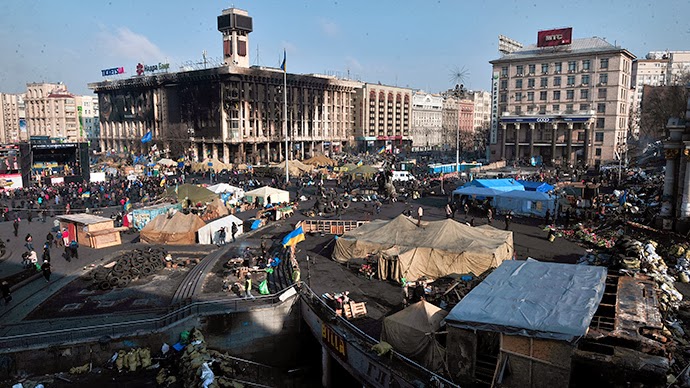 
“The position of some of our Western partners doesn’t show genuine concern, but a desire to act out of geopolitical self-interest,” said a statement on the Russian foreign ministry’s website.


“There is no condemnation of criminal actions by extremists, including manifestations or neo-Nazism and anti-Semitism. In fact, these are being encouraged.”


The statement went on to say that “outside sponsors” are advancing a “regime change” in the country, without a desire to find “national consensus."

Attempts,which are made to involve international structures,including @UN Secretariat in order to justify this policy, arouse great concern


“We urge those embroiled in the crisis in Ukraine to show responsibility, and to prevent further deterioration of the situation, to return to the rule of law, and to stop the extremists in their bid for power.”


An escalating three-month standoff between the opposition and the government came to an end at the weekend, when President Viktor Yanukovich escaped Kiev.


Since then, a Rada composed of opposition deputies and defectors from Yanukovich’s Party of Regions has assumed control, stripping him of his powers, and making its speaker Aleksandr Turchinov the interim head of state.

Referring to ‘revolutionary expediency’,parliament ‘prints’ resolutions and laws aimed at infringing upon humanitarian rights of Russians


The Russian foreign ministry said “paramilitaries... refuse to leave the cities, or abandon the administrative buildings they have occupied, while they continue to carry out acts of violence”. It also censures them for mocking historical memorials.


The statement says that the legitimacy of the Rada is “questionable”, and says that the opinions of the largely pro-Russian regions should not be ignored.

We are sure that the interests of deputies of eastern and southern regions of #Ukraine, #Crimea and #Sevastopol should be met

Moscow accuses the Ukrainian MPs of using “revolutionary expediency” for calls to “virtually forbid the use of the Russian language entirely, encourage a lustration, liquidateparties, shut down certain media, and remove the limitations on Neo-Nazi propaganda”.


The Rada revoked a law that allowed Russian and other minority languages to be recognized as official in multi-cultural regions, and has also proposed an initiative that would forbid officials from the former regime from occupying official posts. One nationalist leader has called for Russian TV stations to be barred from broadcasting in Ukraine.


The Russian ministry has also condemned the announced May 25 presidential election date, saying that according to the February 21 agreement between the authorities and the opposition, made before Viktor Yanukovich left Kiev, that any polls could only be staged after a constitutional reform.


To ensure the success of the reform, any changes to the Constitution should be put to a national referendum, Moscow stressed.

The new Ukrainian authorities have put missing, ousted, President Yanukovich on the wanted list on suspicion of involvement in mass killings during the riots in Kiev. He was reportedly last seen at his residence in Crimea. 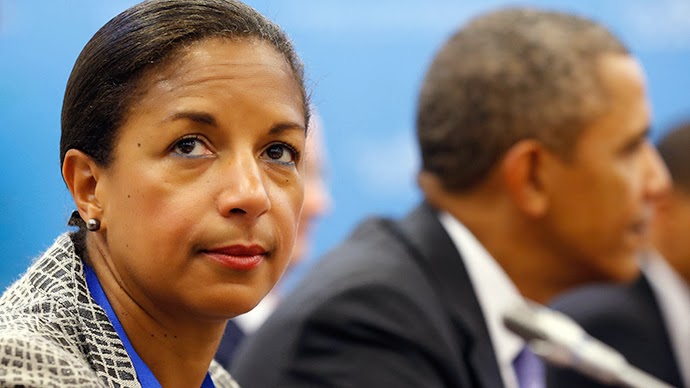 Rice did not elaborate on why she believed Moscow would even consider using military force to help Yanukovich. During the three months of confrontation in Ukraine, Western officials flocked to the country in support of the opposition crowd. Russia, meanwhile, distanced itself from the situation and only criticized the West for what Moscow considered blatant meddling in Ukraine's internal affairs.

“The position of some of our Western partners doesn’t show genuine concern, but a desire to act out of geopolitical self-interest,” said a statement on the Russian foreign ministry’s website.

Following the ouster of President Yanukovich, Moscow has not changed its stance nor voiced any support for him. It only criticized the opposition for not keeping its word and breaking a West-sponsored reconciliation agreement, which it signed with Yanukovich.

Moscow wants to see somebody in Kiev who would have the authority and power to implement whatever agreements the countries may negotiate, Russian Prime Minister Dmitry Medvedev stressed on Monday.

“Frankly, the legitimacy of many governmental bodies is in doubt there,” he said. “Treating masked men armed with Kalashnikov rifles, who are now circling Kiev, as a government – we would find it difficult working with such a government.”

Since the collapse of the Soviet Union and the establishment of new Russia, it has fought just one war with a foreign power. In 2008, Russian tanks were sent to Georgia, after the latter tried to use military force to seize control over its breakaway region of South Ossetia. Russia justified its actions by the death of Russian peacekeepers who were stationed in Georgia under a UN mandate with the brief not to allow military action between Georgians and Ossetians, and who were killed by the advancing Georgian troops.

Russia also used its military in its own territory in the Republic of Chechnya, which went from a nationalist uprising to forming a de facto independent government to transforming into a hotbed of banditry and terrorism, spilling violence into neighboring Russian regions. Moscow eventually took Chechnya back under its control through alliances with some local militant factions and by offering generous rebuilding funding in exchange for assurances of security and loyalty.

In 1991, when the USSR ceased to exist, the US conducted a war against Saddam Hussein's Iraq. Since then America has fought four major wars against foreign nations, including the bombing campaign in Yugoslavia, the invasions of Afghanistan and Iraq (for the second time), and the bombing campaign in Libya. It stopped short of starting a fifth war against Syria in 2013, a move which was prevented in large part by the mediation of Russia, which convinced the Syrian government to relinquish its chemical weapons.

Washington justifies its interventions on humanitarian reasons and the obligation to depose repressive governments. Such obligations however, do not seem to apply to countries which have a poor human rights record, like Saudi Arabia, but remain American allies.