What the Guardian means to say is that neither the government nor the “moderate” opposition can contol the fascist mob. 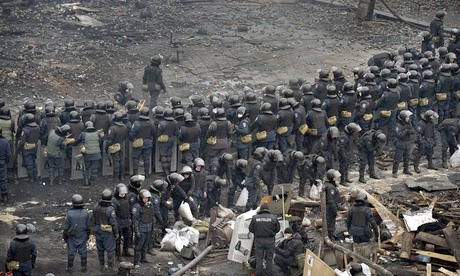 Ukraine's President Viktor Yanukovych signalled concessions to the street campaign seeking to topple him, agreeing to early presidential elections, the quick formation of a coalition government with the opposition, and ruling out a state of emergency after the worst bloodshed the country has seen in almost 23 years of independence.

A marathon negotiation that went through the night, non-stop for 20 hours, resulted in settlement terms aimed at ending a three-month stand-off between Yanukovych's administration and tens of thousands of street protesters occupying central Kiev.

The confrontation exploded this week into pitched battles between riot police and opposition that turned central Kiev into a war zone, with the police resorting to widespread use of live ammunition for the first time, leaving at least 77 dead within 72 hours. The escalation shocked the country and the international community, raising fears of a descent into deeper conflict.

Laurent Fabius, the French foreign minister, spoke of Ukraine veering towards "civil war", while Radek Sikorski, his Polish counterpart, warned that Yanukovych was on the brink of declaring martial law. Both were in Kiev, with Frank-Walter Steinmeier, the German foreign minister, to mediate the terms of the compromise aimed at pulling Ukraine back from the edge of the abyss.

Yanukovych agreed to early presidential elections by December at the latest. That, however, is only three or four months before the next scheduled ballot. It remains unclear whether he will survive in office another 10 months. A trio of the main opposition leaders agreed to those terms and won backing from the organisers of the mass protests focused on Kiev's central Independence Square, or Maidan.

But, with the opposing sides entrenched and highly polarised as seldom before as a result of this week's bloodshed, it was also not clear whether the core of the protesters, who have camped out in winter conditions for three months, would accept anything less than Yanukovych's resignation.

As up to dozen more deputies were said to have deserted Yanukovych's party, the legislators also went beyond the settlement terms and humiliated the president by approving moves to release his arch-rival and former prime minister, Yulia Tymoshenko, from 30 months in jail.

Late on Friday night the US state department confirmed various reports that Yanukovych had left Kiev, but said it believed he had travelled to the city of Kharkiv in the east of the country "to shore up support there" rather than fleeing Ukraine as had been rumoured in some reports and on social media.

US officials are also investigating rumours that the interior minister has fled to Belarus, but have not yet confirmed those reports.

Kharkiv is the second-largest city in the country, in a region that borders Russia and which supported Yanukovych by a 20-point-plus margin. However Kharkiv was also the scene of unprecedented anti-government protests on Friday.

In a sign of improving US relations with Moscow after the Ukrainian peace deal, Barack Obama spoke to president Putin for an hour on Friday – a call that US officials described as an "important signal that they were able to talk positively about the agreement".

The senior state department official also said that US diplomats are hopeful that a vote in the Ukrainian parliament supporting jailed opposition leader Yulia Tymoshenko was a sign that the "alignment of forces within the Ukraine parliament has shifted radically over the last 24 hours".

Secretary of State John Kerry spoke to three of the four current opposition leaders on Friday by phone and vice president Joe Biden, who has been leading US efforts to apply pressure on authorities in Kiev, spoke to president Yanukovych for an hour on Thursday.

Events appeared to be conspiring to drive Yanukovych out of office. His every attempt in three months to crack down and end the crisis has led to its escalation, climaxing in this week's mass loss of life.

The agreement called for prompt reversion to the 2004 constitution, which would curb the president's powers and enhance those of the parliament. It barred the declaration of a state of emergency and said a new government of "national unity" should be formed within 10 days. It limited the police role to the protection of public buildings, but also called for the clearing of public spaces, meaning the protesters would need to disperse.

"I declare steps that must be done to restore peace and avoid more victims of the confrontation. I declare that I initiate early presidential elections," said Yanukovych. "I initiate the return of the constitution of the year 2004 with redistribution of powers [to a] parliamentary republic. I call to begin the procedure of establishing the government of national trust."

Reviled by many at home and discredited abroad, scepticism is high that Yanukovych will go peacefully.

"It would be naive to assume Yanukovych has any good will. He's up against the wall. I don't know anyone in the world who could say he trusts President Yanukovych," said Donald Tusk, the prime minister of neighbouring Poland. "I understand people who say 'we don't trust this man' and that his departure is a condition for this deal. Those people need to be understood. The bodies of people killed the other night are still there … A lack of credibility will hang over all negotiations with Yanukovych's participation."

Steinmeier and Sikorski confirmed that the lengthy negotiations were difficult and contradicted earlier declarations from Yanukovych's office that a deal had been struck.

Tens of thousands of protesters remained in control of central Kiev on Friday , highly suspicious of any agreement announced by the president.

"It was war yesterday. Terrible," said Oleg, a protester. "Today it's quiet, some kind of compromise. But Yanukovych has no chance. He has destroyed himself."

Despite police attempts to retake at least part of the central square this week, the security forces were routed and the opposition expanded and reinforced the territory under its control.

Much will hinge on how Moscow reacts in a crisis that has pitted Russia against the European Union in an increasingly brutal contest for influence in Ukraine. The crisis erupted in November when Yanukovych turned his back on years of negotiating trade and political accords with Brussels and looked to Moscow for cheap credit and gas supplies.

Russia took part in the negotiations in Kiev, but its envoy, Vladimir Lukin, left early and was the only party not to sign the settlement terms.

While the EU will be sure to trumpet the role of the three European foreign ministers in mediating a possible way out of the crisis, President Vladimir Putin in Moscow is widely seen to have the upper hand. "Putin holds all the cards," admitted a senior EU official. "We can only hope Putin is not going to push the Ukrainian system into total collapse, because we don't have real instruments to counter-react."

Earlier this week, Moscow said it would supply a further $2bn this week but on Friday that appeared to be in the balance, with Moscow saying the money depended on the shape of the new government and Kiev saying it was no longer selling the bonds.

That suggested a weakened Yanukovych was yielding to opposition and European pressure on the contours of the new government to be formed within 10 days.

But it remains entirely within Moscow's power to tighten the screws on Yanukovych in the months aheadushanbe, capital of the Central Asian republic of Tajikistan