The Ukraine - an opinion piece 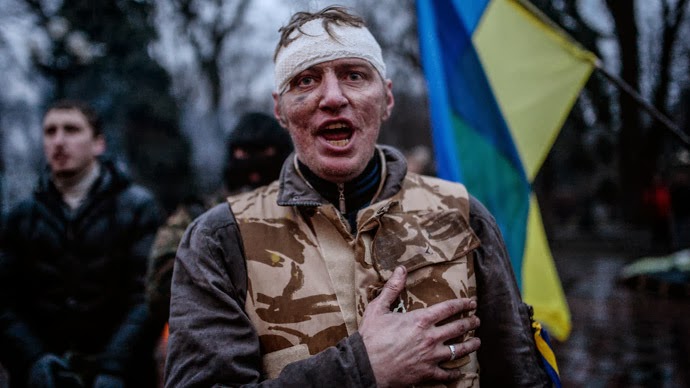 The EU's so-called "crisis plan" for Ukraine is itself a recipe for catastrophe. It is a brokered plan by the wrong people, under extreme (Western) outside pressure, and on behalf of a small group of backward looking and dangerous ideologues.
The plan essentially leaves Ukraine ungovernable and inadvertently promotes a secessionist agenda.

The idea to return to the constitutional order of 2004 is pointless and truly bizarre. One of the key issues during the Orange Revolution was which institution should predominate – the presidency or parliament. Well, the Ukrainians have now tried both with the same result – failure. Why a parliamentary-centered system will work now is not explained. What is worrisome is the fact that Viktor Yanukovich has agreed to give away to parliament control over the police and security forces. Don't expect any investigation into extreme violence committed by the rioters. But do expect a witch-hunt against the police and security forces!
The brokered deal calls for a "national unity government" within days. Will this include the Right Sector? How about those who used violence against the legally established constitutional regime? If this is the case, then it is akin to allowing arsonists to become firefighters. While Dmitro Yarosh's Right Sector controls the streets of Kiev, national unity is an illusion. Another point is constitutional reform. This is laughable on its face. The opposition (and their riotous thug friends), as well as the EU, have trampled upon the constitution for months. Ukraine has conducted two elections recently (presidential and parliamentary) and been given a clean bill of health from Brussels and Washington. With such blatant abuse of the rule of law in Ukraine, it is hard to believe that ultranationalist bigoted rioters have any use for any constitution.


The deal also includes a presidential election no later than December 2014 (only a few months before the current president's term expires). However, there must be a new constitution in place before this happens. Again, this does not pass the laugh test. We should expect Ukraine's eastern and southern region to demand considerable autonomy from Kiev under a new constitution. Western Ukraine will surely object to this. Thus, don't expect a new constitution soon or a presidential election this year.
Then there is the issue of investigating recent acts of violence. This is to be conducted by authorities, the opposition, and the Council of Europe. Who is the opposition in this case? Dmitro Yarosh's Right Sector? Are we to believe just because a racist thug will wear an expensive (EU paid for) suit, he will be respectable and legitimate?
There is even more naivety: The authorities will not impose a state of emergency and both the authorities and the opposition will refrain from the use of violence. This element of the deal is hardly worth commenting on. The government should have declared a state of emergency weeks ago and cleared Maidan. Indeed, violence has been used on all sides. However, when any so-called political opposition resorts to arms, it is called insurrection (and is illegal and illegitimate). Beyond the bad plan and Yanukovich's incompetence

While the EU and the US (i.e. the leaked Victoria Nuland tape) have been shown to be relentlessly attempting to destabilize Ukraine, Yanukovich is no less to blame for Ukraine's dire state. He has been indecisive and irresponsible. All of this could have been avoided had he been more presidential. Instead, it appears he only was concerned with his re-election ambitions. Needless to say, today he is practically irrelevant. This is quite extraordinary considering virtually all state institutions across the country remained loyal to Yanukovich during this artificially created crisis (coming from the West). Yanukovich betrayed them. And he betrayed Ukraine and its partners.

Bleak future: The break-up of Ukraine?

It is hard to think of a scenario in which Ukraine can remain the sovereign state it is today. During the failed Orange Revolution, there was a united opposition. Viktor Yushchenko was recognized and seen as a legitimate leader by a wide range of opposition groups. Sadly for all Ukrainians, Yushchenko's time in office was an unbelievable failure. Today the situation is acutely worse. Ukraine has a shockingly weak and indecisive president and oppositions that are hardly reading from the same page. Who is running whom: Dmitro Yarosh or Vitaly Klitschko? Klitschko is certainly "politics-lite" and happy to be run by the likes of Victoria Nuland, but Yarosh is a different and very extreme figure – only a small minority in the country will ever follow him.
In a country like Ukraine, where the central leadership is weak and the opposition is also weak and fragmented, the logic of secession starts to enter the imagination. Before the events of the Orange Revolution, Ukraine was divided; the current crisis begins to force the question of why the status quo should be maintained. There are ample reasons why Ukraine's east and south will now consider ending any meaningful relationship with those who now control Maidan and all of Kiev.
Beyond what was called the "civilizational choice" is who actually contributes to the country's budget. The east and the south pay Ukraine's bills today. Is the EU interested in adopting a poor and backward western Ukraine? If so, where will the money come from? Will western Ukrainians be allowed to freely work within the EU? Many other questions come to mind. It is the economy, stupid!

While the EU and the US State Department have been ceaselessly recruiting proxies on the ground and media spinning Ukraine, this former Soviet republic faces economic collapse and financial default. The economic situation in Ukraine is grave. Russia has decided to step away from its gesture of economic aid in the amount of $15 billion. When it was promised, there was a legitimately elected government in Kiev. Now the EU plan up-ends the political playing field. Will Victoria Nuland and Brussels bail out the rioters on the streets of Kiev? The good folks of eastern and southern Ukraine would like to know.

Washington and Brussels have long wanted and planned regime change in Ukraine. This just might happen. But both should be wary of wishes coming true. The end result may be a failed western Ukraine state on its border – populated with people with less than "euro values" to say the least. Then there is Russia and its interests. Western mainstream media again are at their best when it comes to mediocre, lazy, and biased reporting. The fact is, Russia doesn't trust the political class in Ukraine – irrespective of its political tastes and preference. Whether it is Viktor Yanukovich, Viktor Yushchenko, or Yulia Tymoshenko, from the Kremlin's perspective they are all political losers and unreliable partners.
Ukraine is being torn apart. It is my guess that Washington and the EU will get the least desirable piece of the action. Regime change is a bad habit that historically leads to even worse outcomes. Sadly for Ukrainians, Western bad habits do nothing to make their lives better.

Peter Lavelle is host of RT's political debate program "CrossTalk" and monthly business program "On the Money." His views are his own and not necessarily those of his employer.