New normal. It’s a word that people keep using to describe the strange weather events spurred by human caused climate change. I prefer to use a different term — the new anomaly. Why? Because the weather will probably never be entirely normal again.

Last week, as Arctic air continued to be squeezed between human-driven warmth invading the polar region and more explosive warmth to the south, a series of strange and extreme weather events ripped through the central and eastern US. Heavy rains combined with melting snows to set off flash flooding from Indiana to Ohio. Severe thunderstorms raked central and eastern states with lightning and very strong straight line winds knocking down trees, power lines and doing damage to structures. Tornadoes, a typical feature of US spring, exploded throughout the middle and eastern US.
As I watched a thunderstorm rumble, flash and pour over melting snow in Maryland, I considered writing a blog about the, somewhat strange, event. But I sidelined it for what seemed to be more pressing projects. Then, I found this — a super-cell thunderstorm featuring a well developed tornado over melting snow in Jacksonville, IL. And, afterward, I read a similar report of a tornado forming over melting snow in southeastern Maryland.
Yes, that’s right. Twistersnow. Yet one more symbol of the new abnormal. Where nothing is placid any longer and anomaly is, ever-after, the word for the day. The current season is kind of winter, sort of spring with 50-70 degree weather rushing in only to be shoved out by 10-30 degree weather as abnormal heat builds in the Arctic once more. 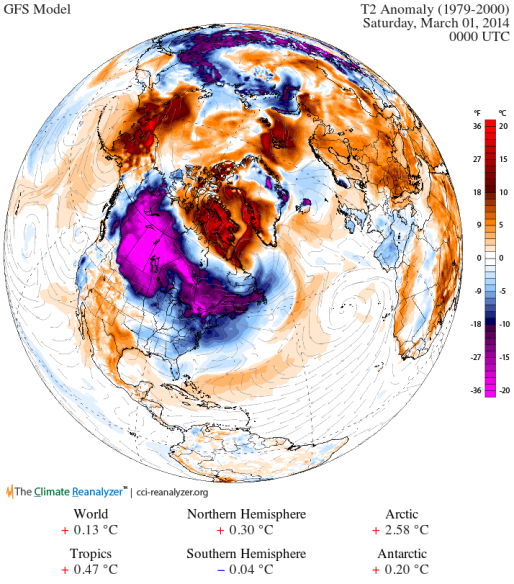 (Five day GFS Model shows unseasonably warm Arctic temperatures over Baffin Bay, the Bering and Beaufort Seas, and Svalbard — regions where sea ice is most vulnerable to melt. Image source: Climate Reanalyzer.)
Yet again we’re staring down the face of another polar vortex collapse and related central and eastern US cold weather event over coming days. The polar heat doing the work, this time, appears to be bound and determined to concentrate over Baffin Bay, Svalbard, and the Bering Sea. All regions where the heat could erode sea ice and shove area and extent back into record low territory.
Links:
Tornadoes in Snow
February Thaw to be Followed by Return of Polar Vortex (collapse)
Snow, Ice, High Winds, Tornadoes Strike Midwest
Climate Reanalyzer

See also - Midwest's February Thaw to be Followed by a Return of the Polar Vortex
Posted by seemorerocks at 19:12