The Search For Drinking Water In California Has Led To The Ocean
California is getting some much needed rain this week, but more than two-thirds of the state is still in extreme drought conditions, and that has the state thinking about alternative ways of getting water. 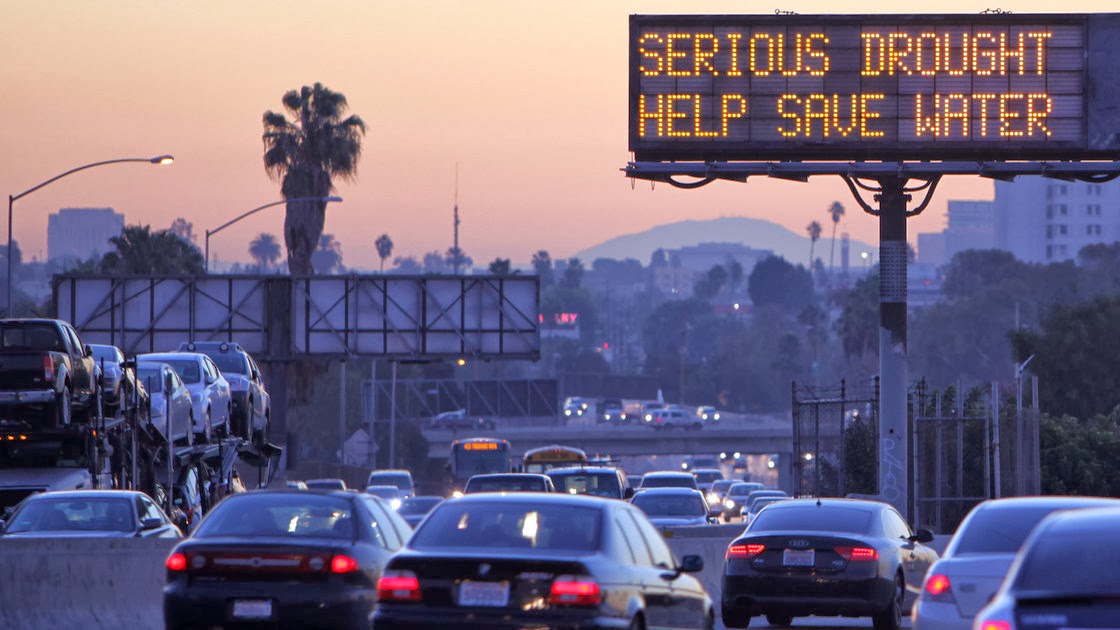 
On the coast in Carlsbad, Calif., construction workers are building what will be the largest seawater desalination plant in the Western Hemisphere. When finished in early 2016, it is expected to provide up to 50 million gallons of fresh drinkable water every day.


"That's enough water for 112,000 households here in the region," says Peter MacLaggan with Poseidon Resources, the developer of this $1 billion plant.


The process, MacLaggan explains, involves taking water from the Pacific Ocean, removing the silt, sand and "organics," then pressurizing the water through very fine membranes. The technical name is reverse osmosis. And the result? "Every 2 gallons of seawater that goes in, 1 gallon of high-quality drinking water comes out," he says.


The word "droughtproof" carries a lot of weight in California. That snowpack in the Sierra Nevada he's talking about is still less than half of what it should be for this time of year. Farmers, environmentalists and cities like nearby San Diego have been fighting over what little water there is.


Yamada says that's why the authority has agreed to buy water from the Carlsbad plant when it's finished — even though it costs twice as much as the water imported from Northern California and the Colorado River.


It's expensive "but it does provide you with the highest reliability," Yamada says. And he says people are willing to pay more for reliability. He also thinks that the difference in price between imported water and desalinated will shrink as more and more people vie for less and less water from rainfall and snowpack.


Desalination costs more because it takes a lot of energy to suck 100 million gallons of ocean water into a plant and pressurize it through little tubes. And that's where the opposition comes in.


"Well, on a macro level, we just think that there are less expensive, less environmentally damaging ways to increase our water supply," says Rick Wilson with Surfrider Foundation. The nonprofit environmental group opposes the Carlsbad project.


One reason, Wilson says, is that all of that energy use will contribute to global warming. More directly, he says, the intake pipe for the plant will suck in sea life, killing marine animals.


"And there's also the concern in some cases about the discharge from these plants," he says. Discharge is the extra salty leftover water that's pumped back into the ocean.


Those concerns have stalled plans for another desalination site farther up the coast, in Huntington Beach. Carlsbad though, has met all of the state's requirements. Still, Wilson says, money would be better spent on conservation and water recycling efforts.


Jeffrey Kightlinger, the general manager of the Metropolitan Water District of Southern California, says the district has invested in conservation and recycling, and it has helped, but the region still needs more water to meet demand. That's always been the case in arid California, but it's even more so now.


"There are two things that are changing the landscape for us," he says. "One is we've grown a lot. We're doing water for nearly 40 million people statewide. The second thing that really changed is climate change. It's real. And it's stressing our system in new ways."


Kightlinger says that means Californians have less time and flexibility to debate different ways of getting water, storing it and moving it to areas where it's needed.


"We don't have time to rehash the same debates over and over and over again. We're going to have to start investing in things for the future," Kightlinger says.


He says desalination helps, but it's not a cure-all. It's expensive, it does take a lot of energy and it can treat only so much water at a time.


His agency gets about 30 percent of its water from Northern California through the State Water Project. "To replace that supply would require a Carlsbad plant every 4 miles between LA and San Diego," he says.

That would be 25 plants in that stretch. Statewide, 17 desalination plants are in some stage of planning on the California coast
Posted by seemorerocks at 20:18