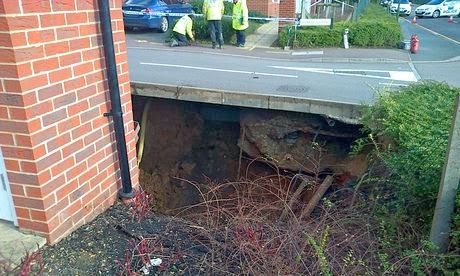 
As if flooded homes and disrupted power supplies have not created enough misery, Britain's wettest winter on record has created perfect conditions for sinkholes, 10 of which have been reported this month. Cars, roads and bits of homes have tumbled into the voids created after the ground collapses into subterranean cavities.

Sinkholes have occurred at between five and 10 times the normal rate in February, said Tony Waltham, an expert on the phenomenon. He said the increase was unsurprising after three unusually wet months. "It is exactly as extraordinary as this being the wettest winter on record. It is a direct correlation with rainfall," he said.

Too much water can cause soluble rocks such as gypsum and chalk to dissolve and erode, creating underground shafts. But too little water can also be a cause. If ground water is removed through abstraction or prolonged drought, underground rocks can crumble under the pressure from above.

Sinkholes can occur slowly or suddenly, depending on the material that coats the surface. Sand will subside along with the material beneath, meaning a gradual sinking. But a more robust material such as clay can hold together for much longer, leaving a chasm beneath.

Alan Cripps, from the Royal Institute of Chartered Surveyors, said assessing properties for underground cavities was prohibitively expensive for most homeowners and not a common surveying practice.

Tony Cooper, from the British Geological Survey, said sinkholes were still very rare and predicting them was futile. "It is impossible to comment on where a sinkhole will appear next, it will most likely depend on where the next heavy rain events occur.

Nigel Cassidy, a geologist at Keele University, said recent flooding showed that the UK's infrastructure was not coping with the runoff from storms. "We don't manage our storm drainage properly, from a flooding point of view. One of the implications of not having that is the higher risk of sinkholes in urban areas." He said government deregulation of development could exacerbate the problem.

About 15% of the UK's bedrock is soluble limestone, found mostly in the south-east where the majority of the recent sinkholes have occurred. Underground hollows can be created naturally by the erosion of rock over thousands of years. Large holes in Hemel Hempstead and Croxley Green in Hertfordshire were probably the result of this type of erosion or a historic chalk mineshaft.

Highly soluble gypsum also occurs in small pockets, including beneath Ripon in North Yorkshire where a sinkhole destroyed a house this week. The erosion of gypsum takes place on a timescale of tens of years, as opposed to thousands of years for limestone.