With Glaciers Undergoing Collapse, Sea Level Rise to Flood More Than 1,500 of Indonesia’s Islands, Capital City Over Next 50 Years

From a climate-wrecking human warming spurring the melting of glaciers and ice sheets to the thermal expansion of the world’s oceans, sea level rise, to some degree or another over the next century is a given. How rapid this expansion progresses and how much land it devours will ultimately depend upon the amount of heat trapping gas we belch into the atmosphere and how sensitive the Earth’s climate system is to our increasingly traumatic insults.
Current conservative assessments from the Intergovernmental Panel on Climate Change (IPCC) estimate a total of 90 centimeters (nearly 1 meter) additional sea level rise before the end of this century. Today’s rate of sea level rise gets us to about 30 centimeters over the same period, so the IPCC is projecting that the pace of rising seas will more than triple over the coming years and decades.

(Global Sea Level Rise from 1993 to 2014. Image source: AVISO.)
Despite the fact that the rate of sea level rise and related glacial melt would have to rapidly uptick to meet the IPCC estimate, it remains a conservative case.
Temperatures, over the next century under business as usual fossil fuel emissions or a moderate mitigation scenario, are likely to increase by between 5 and 9 degrees Celsius. This range of global heating is enough to eventually melt all or nearly all the glacial ice on Earth. So the heat forcing to the world’s glaciers is expected to be extreme, a blow at least equaling the temperature change between now and the last ice age. A temperature change that took 10,000 years to complete now crammed into an exceptionally brief period from 1880 to 2100.
Under such an outrageous pace of warming, a warming that could propel Earth to near Permian and PETM temperatures within 85 years, it is likely that the rate of sea level rise could be double or more that of IPCC predictions, possibly equaling or exceeding peak rates of sea level rise during the end of the last ice age at 10 feet per century. So the range of increase may well be between 1 and 3+ meters, making the IPCC case quite an underestimation if business as usual fossil fuel emissions continue. 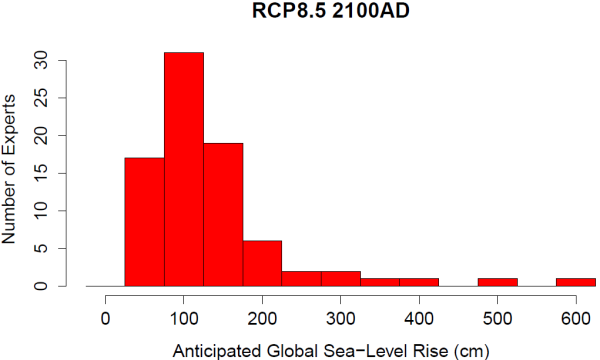 (Survey of scientist projections of sea level rise in centimeters by 2100 under a high emissions scenario (RCP 8.5). Note that a majority of scientists project sea level rise in the range of 1 to 3 meters by 2100 with some scientists projecting as much as a 3 to 6 meter rise over the same period. Image source: Real Climate’s Excellent November Report on Sea Level Rise)
Stresses to glacial systems are already extreme even at the current human forcing of 400 ppm CO2, 1835 ppb methane, and at rising levels of a host of other greenhouse gasses. Current CO2 levels alone, during the Pliocene, were enough to establish seas as much as 75 feet higher than today. A fact that raises the question — if we already have 15-75 feet of sea level rise locked in, how swiftly will that rise occur? And the answer to that question depends on how rapidly the world’s largest glacial and ice sheet systems respond to human greenhouse gas forcing.
Very Large Glaciers Already on the Move
In a recent study one of the world’s largest ice sheets, the Pine Island Glacier, was found to be undergoing the first stages of an irreversible collapse. In other words, over the coming decades, the Pine Island Glacier (PIG) is due to complete an unstoppable slide into the Southern Ocean. And loss of the Pine Island Glacier alone commits the world to about 1 meter of additional sea level rise.
Unfortunately PIG is the first of many glacial systems from West Antarctica to Greenland that are likely to suffer the same fate. For from these vulnerable regions, mass losses from glacial melt have more than doubled over the past decade. In total, by 2008, about 90% of the world’s glaciers were in retreat. And since that time, warming has continued to advance with melt episodes becoming ever-more predominant. 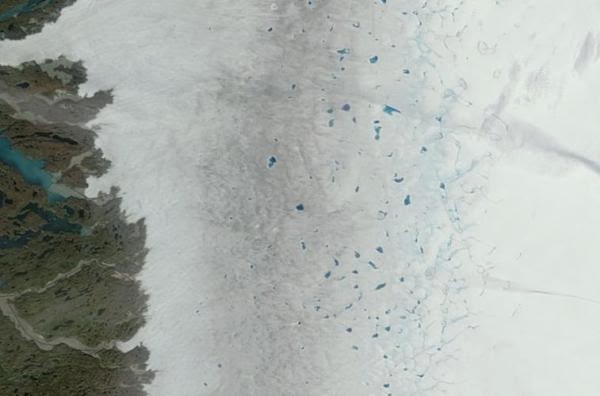 Greenland, for example, has exhibited increasingly severe melt stress over past summers with large stretches of lakes, many measuring 5-10 kilometers wide, forming over an ever-less-stable ice sheet. A towering ice sheet that boasts an average altitude of two kilometers, Greenland’s vast glacial system contains an immense volume of frozen water. But as great and mighty as this mountainous pile of ice may seem, human caused warming continues to deliver a series of ever-more damaging blows. By 2012  Greenland had experienced a record wasting with 97 percent of its surface area showing melt during July and over 600 cubic kilometers of ice lost throughout the entire year. Yet as warmth continues to advance poleward, the 2012 melt season is likely to seem tame with far greater annual losses in store.
So there are many reasons to believe the IPCC estimates for glacial melt rates and related sea level rise, as with Northern Hemisphere sea ice losses, are too conservative and that science, in general, is still coming to grips with a dramatic and geologically unprecedented pace of change. That said, even IPCC findings are becoming increasingly stark.
Indonesia to Lose 10% of its Islands by Mid-Century
For if only the very conservative IPCC estimates bear out, we are still likely to see dramatic loss of lands and displacement of human beings.
A glaring example appears in new report from Maplecroft’s Climate Change Vulnerability Index which found that more than 1,500 islands in Indonesia would disappear after just a half meter of sea level rise. The study also found that the same amount of sea level rise would flood up to half of the capital city of Jakarta. Meanwhile, the 90 centimeters of sea level rise projected by the IPCC for the end of this century would put 42 million people along the coastline at risk of losing their homes.
Ancha Srinivasan, principal climate change specialist with the Asian Development Bank (ADB) noted in an interview that:
This archipelago’s biggest threat is rising sea levels, where 42 million people living three kilometres from the coast are vulnerable if estimated sea level rise reaches up to 90 centimetres by the end of the century.
Indonesia is composed of over 17,000 islands, many of which are low lying or feature sprawling and vulnerable coast lines. It is located in a region of the world where ocean levels are among the most rapidly rising. It is among a growing number of islands and low-lying coastal regions that are under increasing threat from what would seem even a modest change in sea level.
But as we went at length to illustrate above, Indonesia and other regions may be lucky to see only a 90 centimeter rise. So these projected impacts, though seemingly stark, may be at the low end of what we are likely to experience. Add just one more meter and most of Jakarta is flooded while 42 million of Indonesia’s people are almost certain to be members of a vast global migration away from the world’s coastlines.
Links:
Indonesia Risks Losing 1,500 Islands by 2050
Indonesia: Rising Seas Threaten 1,500 Islands
Maplecroft’s Climate Change Vulnerability Index
AVISO
Real Climate’s Excellent November Report on Sea Level Rise
What does a World at 400 PPM CO2 Look Like?
Pine Island Glacier Undergoing Irreversible Collapse
The Pine Island Glacier
SkS Report on Glacier Retreat
The Greenland Ice Sheet


Greenland Experiences 97 Percent Surface Melt in July of 2012
Posted by seemorerocks at 17:06