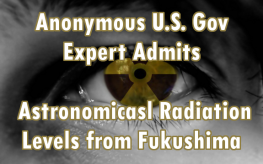 When a U.S. government  nuclear expert directly involved in radiation assessment of Fukushima via helicopter at less than 100 meters away from the site says the radiation levels were off the chart – we should all listen.

The readings came in at 4 sieverts per hour, readings that would back up what experts were trying to warn us about more than three years ago. Claims that Fukushima could be 15000 times worse than Hiroshima were no exaggeration – and that’s without the removal of the fuel rods.
The expert told the The Asia-Pacific Journal in a confidential communication:

“That is an astronomical number and it told me, what that number means to me, a trained person, is there is no water on the reactor cores and they are just melting down, there is nothing containing the release of radioactivity. It is an unmitigated, unshielded number.”

Government agencies around the world have been trying to mitigate the ‘threat’ of Fukushima radiation when it is, in fact, an act to keep us all in the dark about its reality. The Defense Threat Reduction Agency (DTRA) has issued an unclassified report which states as its mission:

“To safeguard the US and its Allies from Weapons of Mass Destruction (Chemical, Biological, Radiological, and Nuclear) and High Yield Explosives by providing capabilities to reduce, eliminate and counter the threat and mitigate its effects.”

What exactly has the agency done to carry out this mission? US soldiers were crippled by Fukushima radiation. Countless Japanese citizens were crippled, and the true rate of contamination is not being reported by any agencies in the US government. Canada has been found lying about radiation levels, and so has the US. They are protecting corporations like Toshiba, GE, and Hitachi instead of reporting the truth of the nuclear industry’s actions to the public.

“After Chernobyl, American nuclear energy proponents blamed it all on “inferior Soviet technology.” But the same can’t be said for Japanese technology. Hitachi and GE share ownership of nuclear operations in each other’s countries; Toshiba controls Westinghouse. If anything, the Japanese are better at this game than the Americans.”

You have to ask yourself the question: Why do governments build nuclear reactors on known fault lines, anyhow? (Aside from the question – why do they build them at all?) Corporate law imposes limited liability when the nuclear industry tries to cut corners, but there may be an even more insidious reason. The Queen of England and the Rockefellers are making billions off of the nuclear industry, protected under the ‘Official Secret Act.’ She also owns depleted Uranium mines in multiple countries.
If you pit one country against another, with nuclear power, then you can demand whatever you want – new furnishings for your multiple mansions, a pretty new tiara. . .more than £17 billion in  nuclear investments is plenty to decorate the royal halls with, and it can also kill millions, but never mind.