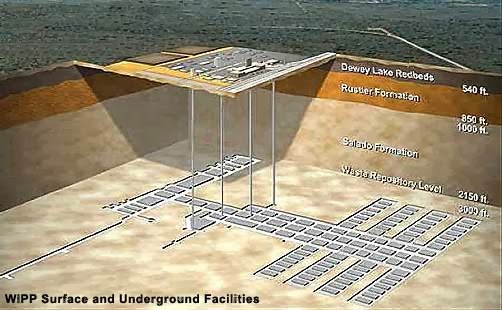 The Department of Energy has confirmed the airborne release of Plutonium-239 & Americium-241 from underground nuclear waste storage site near Carlsbad, NM. Body and lung scans are now being conducted for everyone within 100 miles of the site, yet nuclear proponents insist, as usual, there’e no threat to public health or safety and the military nuclear facility has been shuttered.

“We are wondering why it took a couple of days to confirm the radiological event outside of the underground,” said Environment Secretary Ryan Flynn. “We will demand that federal officials share information with the public in real time. That’s the reason we are here.”
Known as the Waste Isolation Pilot Plant (WIPP), the facility is the nation’s only licensed deep geological nuclear waste repository. Approximately 26 miles east of Carlsbad, New Mexico, the facility is the nation’s so-called solution for permanent disposal of the Department of Energy’s cold war legacy transuranic waste that has been stored at 23 former nuclear-weapons-complex and generation sites located across 13 states

The term transuranic refers to artificially made radioactive elements, such as neptunium, plutonium, americium, and others, with atomic numbers higher than uranium in the periodic table of elements.

While AlertsUSA is clearly Islomophobic, its nuclear and other threat alerts are worth registering to receive.