Oil spill on the Mississipi 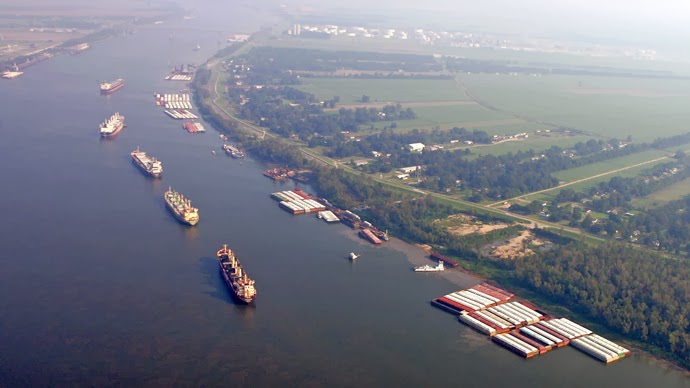 As cleanup crews continue to work on the spill, the US Coast Guard said it did not know exactly how much oil had leaked into the river. Speaking to the Associated Press, Coast Guard Petty Officer Bill Colclough said only a sheen of oil was reported after the collision near Vacherie, Louisiana, almost 50 miles away from New Orleans.

Colclough added that no injures were reported as a result of the accident, all the barges involved had been secured, and that an investigation concerning the cause of the collision was underway.

"Lightering operations on the damaged barge concluded early Sunday morning and the source of the spill was secured," the Coast Guard said in a press release, according to United Press International. "Oil spill response vessels and recovery equipment are deployed in the river."

Still, it remains unclear when exactly the river will be reopened As of Sunday afternoon, there were 16 ships waiting to move downriver, while another 10 were stopped as they headed upriver. According to The Advocate, those vessels may still have a significant wait ahead of them.

While the Coast Guard has deployed floating booms to prevent the oil from spreading, the Captain of the Port elected to shut down river traffic from mile marker 90 to mile marker 155 as a precaution, as well as "to avoid possible contamination of passing vessels.” Flyovers are also being employed in order to track the oil’s movement.

The collision occurred after a barge carrying light crude oil – one of two on the river at the time – allegedly rear-ended a towboat that was moving grain barges out of the shipping lane. Any remaining oil had been transferred to the second barge, and Colclough said it’s possible the responsible party will be assessed a financial penalty following the investigation.

Meanwhile, local officials stated that community water supplies remain safe to use. The water intakes in St. James Parish were reportedly protected by booms shortly after the crash and remained open as water plants tracked the situation. St. Charles Parish, meanwhile, closed its water intakes as a precaution.