Law will hit deep-sea drilling protesters
The public will lose their right to formally oppose deep-sea oil and gas exploration from tomorrow. 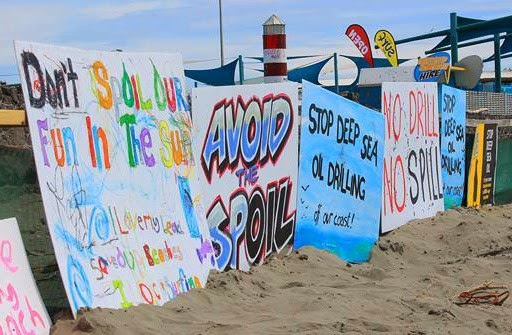 A law change will see applications by oil giants go through the Environmental Protection Agency (EPA). They will now be "non-notified" preventing members of the public lodging a formal protest.
Environment Minister Amy Adams said the new classification was the "pragmatic option" for exploratory drilling. She believed it provided regulation "proportionate to its effects".
An overhaul of the laws and regulations governing the oil and gas industry "will provide effective oversight and environmental safeguards without burdening industry with excessive costs and timeframes".
Operators must now submit to the EPA an assessment that identifies "impacts" on the environment. The firms must also demonstrate they consulted with interested parties.
The change was introduced by way of a Supplementary Order Paper (SOP) which meant it didn't go through a parliamentary select committee.
The move followed the controversial "Anadarko Amendment" which saw a ban on protesting at sea. Labour Minister Simon Bridges was criticised for introducing it as an SOP, also avoiding select committee scrutiny, and kowtowing to oil companies.
If an oil company strikes oil they must apply for a new marine consent for production. At this stage, the public are allowed to make submissions on the proposed activities.
Texan oil giant Anadarko are currently test-drilling off the coast of Oamaru, after a recent expedition off Raglan failed to yield any results.
The Green Party said the new regulations "muzzle" the public.
"The Government legislated to stop people voicing their opposition at sea, and now they are locking them out on land," energy spokesman Gareth Hughes said.

Greenpeace Response to Government Oil Drilling Announcement
http://www.greenpeace.org/new-zealand/en/press/Greenpeace-Response-to-Government-Oil-Drilling-Announcement/
Press release - February 27, 2014
Responding to news today that the Government will not allow New Zealanders the chance to have a say about exploratory oil drilling, by classifying it as a ‘non-notified discretionary activity’, Steve Abel, Greenpeace’s energy campaigner, said:
“This is a cowardly move from a Government doing the bidding of foreign oil companies.
“This announcement is a slap in the face for anyone who wants their kids to swim in clean seas, for whom fishing is a way of life, and who believes in our right to have a say. It strips away the chance for New Zealanders to protest about the most dangerous stage of oil drilling.
“The Government are little more than lackeys for the oil industry. A government who wanted to see our economy boosted by billions of dollars and tens of thousands of jobs would turn their backs on this outdated industry and back our own, cutting-edge clean energy industry instead.”