Life on earth older than thought 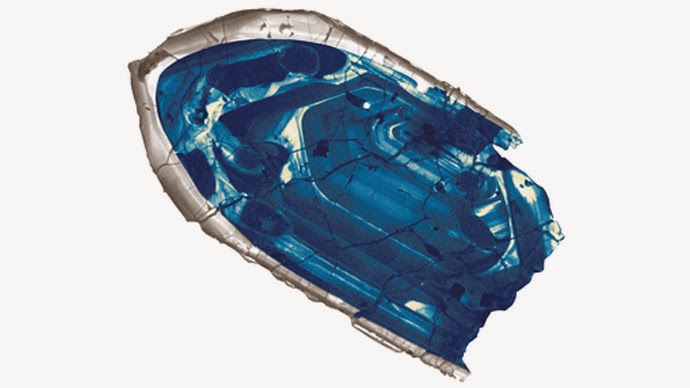 Ancient zircon crystals, discovered in Australia in 2001, have now been proved to be our planet’s oldest known substance. The 4.4 billion-year-old gem offers clues that Earth could have become habitable much earlier than previously believed.
Aside from being just a cool fact to know, this recent discovery (available in the journal, Nature Geoscience) gives scientists at the University of Wisconsin a new insight into our planet’s infancy.

There are now grounds to suggest that Earth cooled down much sooner, and that life appeared way before many scientists had thought.
"We have no evidence that life existed then. We have no evidence that it didn't,” Wisconsin geoscience professor and report lead, Professor John Valley, told Reuters. “But there is no reason why life could not have existed on Earth 4.3 billion years ago," he added.

The oldest fossil records of life are stromatolites produced by an archaic form of bacteria from about 3.4 billion years ago.
Scientists believe that thanks to low enough temperatures, Earth had a hydrosphere and possibly early life even before 4.3 billion years ago. In fact, there is even a theory of a "cool early Earth.”

Professor Valley says their discovery really strengthens this notion.
“The study reinforces our conclusion that Earth had a hydrosphere before 4.3 billion years ago, and possibly life not long after,” John Valley is quoted as saying in the press-release. Our planet formed as a ball of molten rock 4.54 billion years old. The first 500 million years of Earth have been dubbed Hadean, after the ancient Greek god of the underworld, or hell-like, because scientists believed that it was covered with lava and subsurface magma, making it an absolutely inhospitable place.

Valley’s discovery undermines this idea.
This 4.4 billion-year-old zircon crystal proves that the Earth cooled from a ball of magma and formed continents much earlier.
He and his team confirmed that our planet first developed a crust just 160 million years after the formation of our solar system.
“Our samples formed after the magma oceans cooled and prove that these events were very early,” he wrote.

But his team still has no answer to the main question: "One of the things that we're really interested in is: when did the Earth first become habitable for life? When did it cool off enough that life might have emerged?" Professor Valley said.
So, how did the University of Wisconsin scientists make their breakthrough findings?
They used two different age-determining techniques on the tiny zircon crystal, as small as 200 by 400 microns, about twice the diameter of a human hair, extracted from a rock outcrop in the Jack Hills region, Western Australia, in 2001.
But first they used a widely-accepted dating technique based on determining the radioactive decay of uranium to lead in a mineral sample.
Valley and his colleagues then looked at lead atoms in zircon using a new technique called atom-probe tomography in conjunction with secondary ion mass spectrometry. It helped them identify individual atoms of lead in the crystal and then determine the age and thermal history of zircon by estimating the mass of lead atoms.
And so it was confirmed that the zircon is indeed 4.4 billion years old.