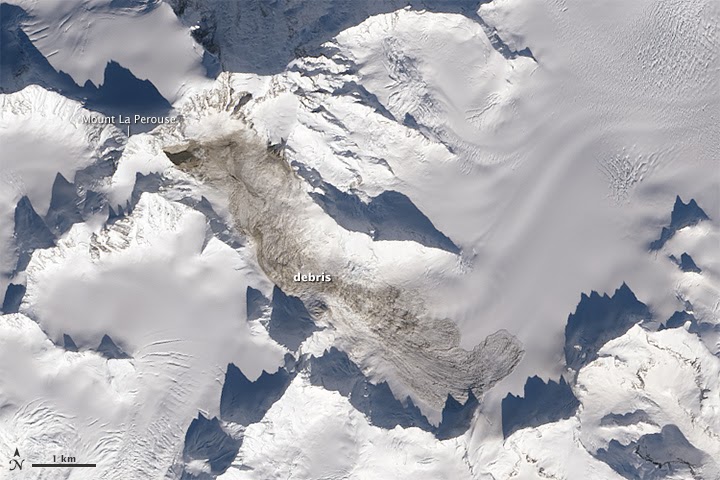 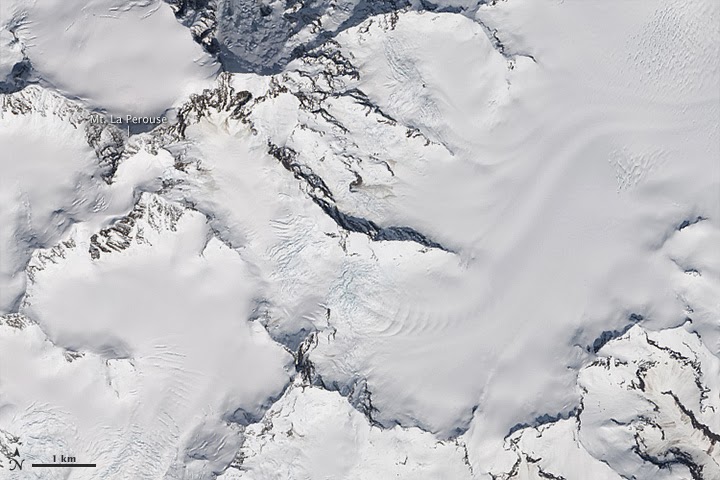 Using imagery from the Landsat 8 satellite, scientists have confirmed that a large landslide occurred in southeastern Alaska on February 16, 2014. Preliminary estimates suggest the landslide on the flanks of Mount La Perouse involved 68 million metric tons (75 million short tons) of material, which would make it the largest known landslide on Earth since 2010.

The Operational Land Imager on Landsat 8 acquired this image on February 23, 2014. The avalanche debris appears light brown compared to the snow-covered surroundings. The sediment slid in a southeasterly direction, stretching across 7.4 kilometers (4.6 miles) and mixing with ice and snow in the process. The slide was triggered by the collapse of a near-vertical mountain face at an elevation of 2,800 meters (9,200 feet), according to Columbia University seismologist Colin Stark.

Stark first became aware that a landslide may have occurred when a rapid detection tool that sifts through data collected by global earthquake monitoring network picked up a signal indicative of a fairly significant event. The earthquake sensors detect seismic waves—vibrations that radiate through Earth’s crust because of sudden movements of rock, ice, magma, or debris.

While both earthquakes and landslides produce both high-frequency and low-frequency waves, landslides produce more low-frequency waves on balance than earthquakes. Most earthquake detection tools are focused on high-frequency waves, but the detection tool Stark was using—the Global Centroid-Moment-Tensor (CMT) Project—also looks closely at low-frequency waves, meaning it is more likely to detect landslides than other tools.
Since the Global CMT tool had detected a significant event, while other tools managed by the U.S. Geological Survey and the Alaska Earthquake Information Center had not, Stark suspected he had found a landslide. Additional analysis of the seismic data by Columbia scientists Göran Ekström and Clément Hibert confirmed Stark’s hunch, narrowing the location down to a 25 square-kilometer (10 square-mile) area in southeastern Alaska.

The first visual confirmation that the slide had occurred came on February 22, 2014, when helicopter pilot Drake Olson flew over and photographed landslide debris at 58.542 degrees North and 137.01 West. Landsat 8 passed over a day later, offering another view of the slide.