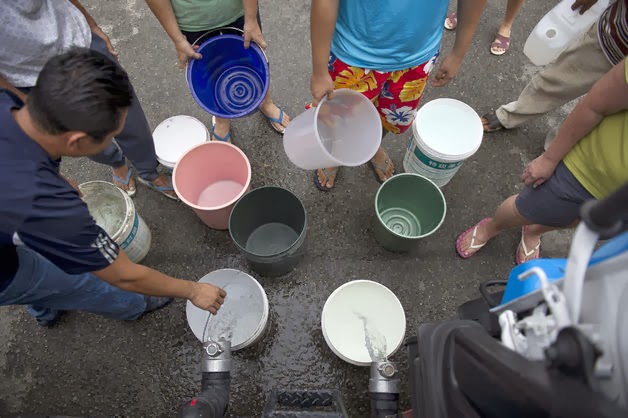 
“The supply of raw water in Selangor state is in a critical condition,” Khalid Ibrahim, the state’s chief minister, said in a faxed statement late yesterday. “The water levels at a few dams have been shrinking to reach an alarming stage.”
Rationing may also start in parts of Negeri Sembilan, south of Kuala Lumpur, if there is no rain in coming days, the New Straits Times reported today, citing the state’s Chief Minister Mohamad Hasan. Several other states have also reported shortages amid rising concerns over the potential impact on Malaysian palm oil crops if the drought continues. Prime Minister Najib Razak is due to discuss the situation in cabinet tomorrow, including the possibility of cloud-seeding, the official Bernama news service said.
Opposition-controlled Selangor, which surrounds Kuala Lumpur, has been trying to nationalize water-treatment assets in its jurisdiction for years to restructure the industry and tackle periodic shortages. Malaysia’s local and national governments want to announce a final resolution to the buyout within two weeks, the state’s chief minister said Feb. 18.
Commodities Impact
The regional government offered companies including Gamuda Bhd. (GAM) a combined 9.7 billion ringgit ($3 billion) for their assets in December, Sharizan Rosely, an analyst at CIMB Group Holdings Bhd., wrote in a Jan. 10 report. Kumpulan Perangsang Selangor Bhd. (KUPS) and Puncak Niaga Holdings Bhd. (PNH) are also being asked to sell.
Malaysia’s palm oil, cocoa and rubber-tapping industries are dependent on regular rainfall. An El Nino weather pattern, which can parch Australia and parts of Asia while bringing rains to South America, may occur in the coming months, Australia’s Bureau of Meteorology said today.
“It needs a very prolonged drought to have a severe effect” on palm oil production, Ling Ah Hong, director of Malaysian research and consulting company Ganling Sdn., said by phone. “This current drought is only about three to four weeks.”
A prolonged drought might have a lagged effect on next year’s production, mainly through floral abortion when cells die before they can mature, said Ling.
Palm Prices
Crude palm oil prices have climbed 7.6 pecent this month and rose 0.4 percent to 2,753 ringgit per metric ton as of the 12:30 p.m. trading break in Kuala Lumpur, according to data compiled by Bloomberg.
The positive price uptrend for crude palm oil is expected to be sustained as the current hot and dry weather affects parts of Malaysia and Indonesia, IOI Corp. (IOI), Malaysia’s second-largest palm oil producer by market value, said in a stock exchange filing today.
The dry weather began in early February and may last until mid to end of March, the Malaysian Meteorological Department says in e-mailed statement to Bloomberg News today. El Nino weather conditions may develop after May or June, it said.
For optimal yield per hectare, palm oil requires rainfall of 1,500-2,000 millimeters or more distributed evenly through the year without a drought of more than three months, the department said.
Production Impact
“The severity of the decline in production will depend on how long the dry season lasts,” Alan Lim Seong Chun, an analyst at Kenanga Investment Bank Bhd., said by phone in Kuala Lumpur. “In the worst-case scenario, it can drop to 30 percent below normal.”
Residents in parts of Selangor will get water on alternate days and rationing will continue until the end of March if hot weather continues, the chief minister said. The government will evaluate the situation before deciding on whether to declare an emergency, Bernama reported on Feb. 21, citing Najib.
“If the drought continues past March, then we might have to deal with more severe rationing that could possibly have an impact on our GDP,” Yeah Kim Leng, chief economist at RAM Holdings Bhd., said in a phone interview from Kuala Lumpur. “It’s likely to be short-lived.”
Neighboring Singapore had a record 27 consecutive days of dry weather from Jan. 13, the country’s National Environment Agency said. The rain shortage may extend into the first half of March, it said in a statement.