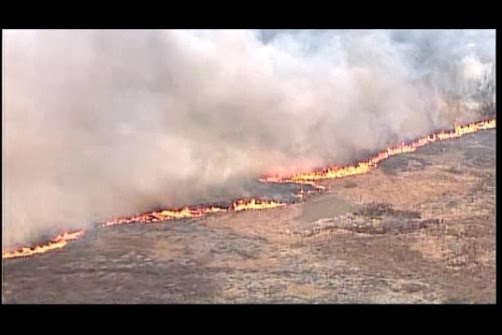 It’s late winter in Arizona and New Mexico. Or at least that’s what the calendar says. During this time of year, snow packs should grace the mountain peaks and cool breezes should blow down into the valleys. A train of west coast moisture should be riding over the mountains of California, bringing with it the occasional snow or rainstorm.
Not so this winter. The blocking pattern over the west coast has mostly held strong — pumping warm, dry air up from the southwest. This warm flood has resulted in continued severe drought conditions ranging from Texas through New Mexico, Arizona and Nevada. Most of California still reels under the worst drought seen in at least a century. While according to reports from the US Drought Monitor, New Mexico experienced its driest January on record. And though the 10 month long blocking pattern barring the Pacific moisture flow briefly fluttered in early February, it has since reasserted itself. 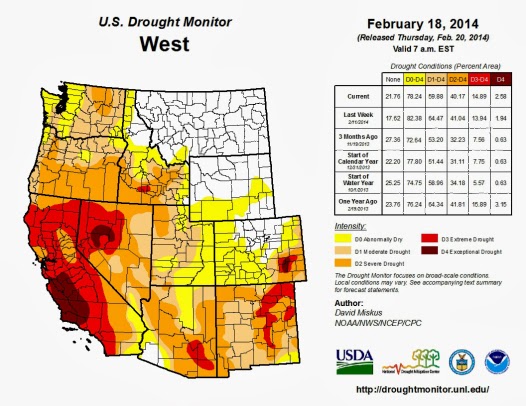 (Drought Monitor showing 60% of the Western US suffering from some level of drought. Image source: United States Drought Monitor.)

The result, for Arizona and New Mexico, is unprecedented. For all across these states, weather conditions are pointing toward the beginning of an entirely different season. Humidity levels are excessively low. Temperatures are warm or abnormally warm. And abundant dessicated vegetation covers the hills and valleys. It is a set of conditions that usually don’t begin to ramp up until May. The season of burning and of combustive heat — fire season. In February.
0.1 Inches of Rainfall, Brush Fires Encroaching on Cities
One needn’t look too far to find causes for an early emerging fire hazard. The region of Tuscon, for example, only received a tenth of an inch of rainfall throughout the entire month of January. Throughout February, moisture levels have remained exceptionally low with relative humidity often ranging into the single digits. The result is that vegetation which briefly exploded during a period of abnormally intense rainfall this summer has become withered and dessicated, providing ample and highly combustible fuel should any ignition source emerge.
These are the conditions we should expect as a result of human caused climate change — very intense precipitation followed by very intense dryness along with Jet Stream patterns that tend to become stuck as Arctic sea ice loss and polar amplification in the Arctic accelerates. 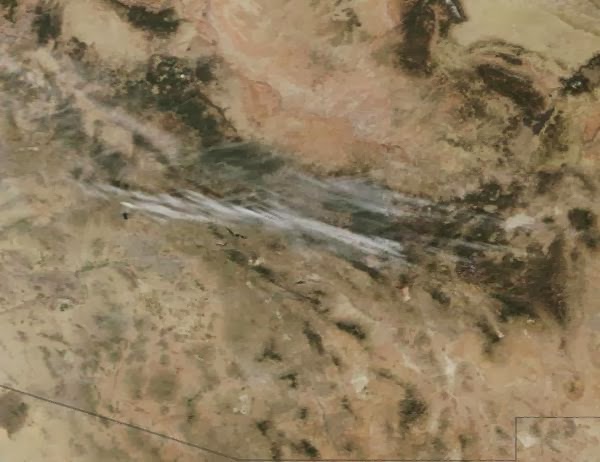 (Smoke from sporadic brush fires visible over regions of central and southern Arizona and New Mexico that are now virtually devoid of any snow pack, even in February. Image source: Lance-Modis/NASA.)

Even worse, the snow packs for the region, which for years have been steadily receding under a regime of increasing temperatures, are now practically non-existent. Snow pack usually aids in the suppression of ridge and mountain fires until late spring by locking in soil moisture, adding moisture to dry air, and creating runoff that is a natural barrier to fires. Not so for 2014 as there is simply no snow pack to speak of.
In addition to the 500 acre Isleta New Mexico fire, such dry conditions have already led to a spate of brush fires that have encroached on major cities in the region, prompting officials to warn of the, above mentioned, very early start to fire season. According to reports from the Arizona Daily Star:
The recent warm weather, dry conditions and a spate of brush fires on the outskirts of major cities of Arizona and New Mexico are prompting warnings that the 2014 wildfire season is already underway.
The result is that fire warnings have been raised as tinder-box conditions of low humidity, temperatures ranging into the upper 70s, strong winds, and amply abundant fuel persist and intensify. And given that the fire risk began in February, we can expect a very, very long fire season ahead.
Winter Fires Ranged from California to the Arctic in 2014
Unfortunately, Arizona and New Mexico were not the only regions suffering from winter fire seasons during early 2014. California, suffering its worst period of drought in at least 100 years, saw a set of powerful fires rage through Colby near Los Angeles in January. Meanwhile, freakish fires burned near the Arctic Circle in Norway just a week later. Now Arizona and New Mexico add an initiation of fire season in February to the unprecedented tally.
Links:
Fire Season Already Underway in Arizona
Isleta Fire Now 466 Acres
United States Drought Monitor
Lance-Modis/NASA
2000 Acre Colby Fire Rages Near Los Angeles in Winter
Arctic Wildfires in Winter
Hat tip to Collapse of Industrial Civilization
Hat tip to Miep