A group of armed men in military uniforms have seized Simferopol international airport in the capital of Crimea, Interfax reports.

According to eyewitnesses at least three KamAZ trucks without license plates drove to the airport with about 50 armed men. They are reportedly equipped similar to the group of local ethnic Russian ‘self-defense squads’ that had taken control of and raised Russian flags over the buildings of the Crimean parliament and government in the region’s capital.

At first the group cordoned off the airport’s domestic flights terminal, but then pushed forward, according to Interfax. So far the motive for the takeover remains unclear.
http://rt.com/news/crimea-airport-terminal-capture-095/ 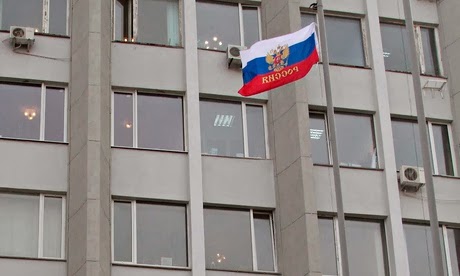 Fears of a major regional conflict in Crimea pitting Russia against the west intensified on Thursday after pro-Russian gunmen seized the regional government and parliament building in a well co-ordinated military operation.

According to witnesses, men dressed in fatigues stormed Crimea's administration in Simferopol at 5am, hoisting a Russian flag above the parliament building. About 120 men were holed up inside, armed with heavy weapons including rocket-propelled grenades and sniper rifles, witnesses said.

With gunmen controlling the building, Crimea's parliament voted to hold a referendum on the region's status on 25 May, the same day Ukraine goes to the polls in presidential elections. It also voted to sack the region's cabinet. The move puts the predominantly ethnic-Russian region on a collision course with Kiev's interim government and will fuel concern Ukraine is sliding inexorably towards break-up.

It was unclear whether the gunmen were undercover Russian soldiers or members of a pro-Russian self-defence militia formed in response to Ukraine's revolution, which has included radical nationalist groups. The former head of the Crimean parliament, Serhiy Kunitsyn, described the men as professionally trained and armed with enough weaponry to defend the complex for a month.

That government confirmed 39-year-old former opposition leader Arseniy Yatsenyuk as acting prime minister, and gave two of the former regime's most prominent victims places in the new administration. Tetiana Chornovol, an investigative journalist beaten up by thugs, heads a new anti-corruption office. Activist Dmytro Bulatov, who was kidnapped and had part of his ear cut off, becomes Ukraine's youth minister.

Ukraine's acting president, Oleksandr Turchynov, who has been in the job since Yanukovych fled the country, warned Russia not to intervene in the crisis by moving troops. The Kremlin's Black Sea fleet is based near Simferopol in the port of Sevastopol. Turchynov said: "I am appealing to the military leadership of the Russian Black Sea fleet. Any military movements, the more so if they are with weapons, beyond the boundaries of this territory [the base] will be seen by us as military aggression." Ukraine's foreign ministry also summoned Russia's acting envoy in Kiev for consultations.

The White House said it was closely watching Russian's military manoeuvres, ordered by Vladimir Putin next to Ukraine's border. Putin also put fighter jets on a state of high alert.

The US defence secretary, Chuck Hagel, called on the Kremlin to show restraint and reaffirmed Washington's commitment to Ukraine's territorial integrity and sovereignty.

After meeting Angela Merkel, David Cameron said he and the German chancellor were particularly concerned. Nato's secretary general, Anders Fogh Rasmussen, urged Russia not to do anything that would escalate tension or create misunderstanding.

Poland's foreign minister, Radoslaw Sikorski, described the seizure of government buildings in the Crimea a "very dangerous game". He told a news conference: "This is a drastic step, and I'm warning those who did this and those who allowed them to do this, because this is how regional conflicts begin."

Hours after the parliament building was seized, Yanukovych revealed he was in Russia and had sought protection from Putin. He said he would hold a press conference on Friday in Rostov-on-Don, close to Ukraine's border and his home city of Donetsk.

His unusual choice of a provincial press conference venue suggests he still nurtures hopes of a return to power, possibly as the leader of a breakaway Russian-backed enclave encompassing Crimea and eastern Ukraine.

In Kiev, members of Ukraine's new government hinted that the country would sign an association agreement with the EU next month. It was Yanukovych's decision in December to dump the agreement – and instead accept a bailout from Russia – that prompted the street demonstrations that eventually led to his overthrow. Ukrainian officials branded the referendum decision by Crimea's parliament as unconstitutional.

Earlier in Simferopol, the gunmen barricaded doors into the parliament building with wooden crates. Police sealed off the area on Thursday, as a crowd supportive of the seizure gathered outside. Two people died and 35 were injured during clashes outside the building on Wednesday between pro-Russian demonstrators and Muslim Tartars. About half of Crimea's 2 million population are ethnic Russians. The Tatars – the peninsula's original Turkic-speaking Muslim inhabitants – are 300,000 strong and support the authorities in Kiev.

Witnesses described the moment when the armed men turned up. "We were building barricades in the night to protect parliament. Then this young Russian guy came up with a pistol … we all lay down, some more ran up, there was some shooting and around 50 went in through the window," Leonid Khazanov, an ethnic Russian, told Reuters.

Khazanov added: "They're still there … Then the police came, they seemed scared. I asked them [the armed men] what they wanted, and they said: 'To make our own decisions, not to have Kiev telling us what to do'."

The former head of the central executive body of Crimean Tatars, Mustafa Jemilev, said the situation was extremely worrying. He suggested the gunmen had arrived from Sevastopol, where the Russian fleet is based. "The people in camouflage and without any distinctive signs came by buses from the Sevastopol side. There are reports of movement of armed vehicles of the Russian fleet in different directions. We also got signs that in many hotels there are Russian soldiers wearing civilian clothes. The Russian general consul office says they have nothing to do with these events. But they would hardly tell the truth."

Jemilev speculated that the gunmen could be Russian soldiers or members of Berkut, the now-disbanded riot police unit deployed against opposition protesters in Kiev. Lifenews.ru, a pro-Kremlin Russian website with links to Russia's spy agencies, however, said they were veterans from the army and police. According to US diplomatic cables leaked in 2010 by Wikileaks, Russia's military intelligence wing – the GRU – is highly active in Crimea.

About 100 police had gathered in front of the parliament building on Thursday. A similar number of people carrying Russian flags later marched up to the building chanting "Russia, Russia" and holding a sign calling for a Crimean referendum.

Many wore orange-and-black striped ribbons that symbolise support for Russia. One of them, Alexei, 30, said: "We have our own constitution, Crimea is autonomous. The government in Kiev are fascists, and what they're doing is illegal … We need to show our support for the guys inside [parliament]. Power should be ours."

"Yesterday Russian people were attacked and murdered by Tatar extremists. We will not allow this fascism from Kiev to happen here," said 43-year-old construction worker, Spartak. "Crimea wants independence and we want parliament to hold a referendum on this. We have been hijacked."

Policemen informed passersby that Karl Marx Street was closed due to the presence of snipers in the areas. Nearby shops and businesses have closed and pulled down their shutters.

The acting interior minister, Arsen Avakov, who said the attackers had automatic weapons and machine guns, urged calm. He said on Facebook: "Provocateurs are on the march. It is the time for cool heads."

Turchynov, speaking to the parliament in Kiev, described the attackers as "criminals in military fatigues with automatic weapons".

Yanukovich in Russia, to hold press-conference in Rostov-on-Don Friday – source

The site of the event will be announced later, the agency writes.

Yanukovich vanished over the weekend and his whereabouts have so far been unknown, with rumors claiming that he could have fled to Russia, or that he was still in Crimea.

He was reportedly last seen in Crimea.

The new Ukrainian authorities – who came to power following months of violent confrontation – put Yanukovich on an international wanted list on suspicion of involvement in mass killings during the riots in Kiev.

Dozens of people were killed in clashes between armed radical protesters and security forces.On February 22, Ukrainian MPs voted to oust Yanukovich and hold a presidential vote on May 25.


Ukraine’s parliament, the Verkhovna Rada, held an emergency session and passed a law on the return to the 2004 constitution without the president's approval, saying that the president had removed himself from power.


Yanukovich described the situation as a coup d’etat and said he was not going to resign, as he was a “legitimately elected president.”


On February 23, the parliament voted for its speaker, Aleksandr Turchinov, as acting president of Ukraine.


The Ukrainian leader fled Kiev at the end of the worst week of violence since protests began in November, when he refused to sign an association agreement with the EU.


On Wednesday, Ukraine’s deputy prosecutor general said that the president was still on the country’s soil, without giving any further details.


On Thursday Viktor Yanukovich made a statement that he still considered himself the legitimate leader of Ukraine and warned against an internal military conflict. He also asked Russia to ensure his safety against the actions of “extremists” that took power in Ukraine.

Posted by seemorerocks at 14:52