Behind the world's revolutions

It's happening in Ukraine, Venezuela, Thailand, Bosnia, Syria, and beyond. Revolutions, unrest, and riots are sweeping the globe. The near-simultaneous eruption of violent protest can seem random and chaotic; inevitable symptoms of an unstable world. But there's at least one common thread between the disparate nations, cultures, and people in conflict, one element that has demonstrably proven to make these uprisings more likely: high global food prices.

Just over a year ago, complex systems theorists at the New England Complex Systems Institute warned us that if food prices continued to climb, so too would the likelihood that there would be riots across the globe. Sure enough, we're seeing them now. The paper's author, Yaneer Bar-Yam, charted the rise in the FAO food price index—a measure the UN uses to map the cost of food over time—and found that whenever it rose above 210, riots broke out worldwide. It happened in 2008 after the economic collapse, and again in 2011, when a Tunisian street vendor who could no longer feed his family set himself on fire in protest.
Bar-Yam built a model with the data, which then predicted that something like the Arab Spring would ensue just weeks before it did. Four days before Mohammed Bouazizi's self-immolation helped ignite the revolution that would spread across the region, NECSI submitted a government report that highlighted the risk that rising food prices posed to global stability. Now, the model has once again proven prescient—2013 saw the third-highest food prices on record, and that's when the seeds for the conflicts across the world were sewn 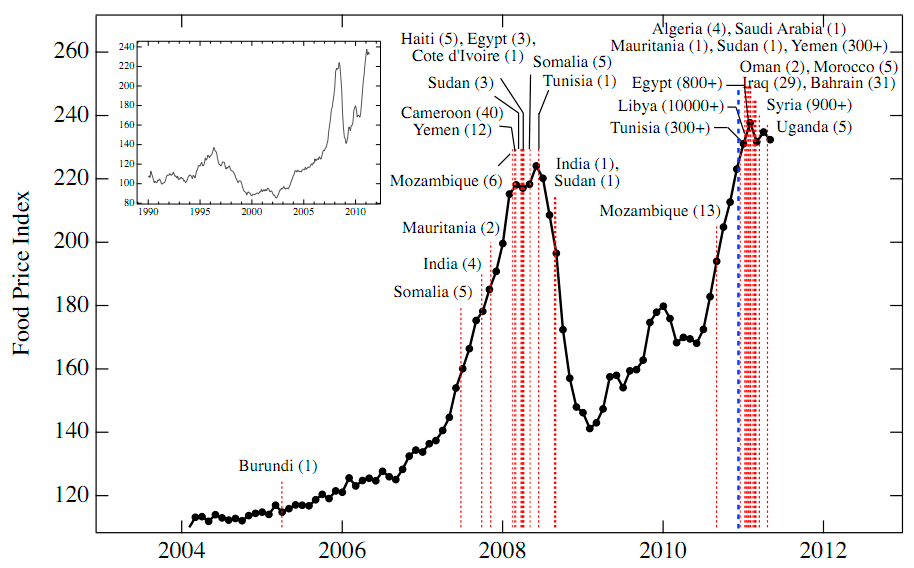 "I have a long list of the countries that have had major social unrest in the past 18 months consistent with our projections," Bar-Yam tells me. "The food prices are surely a major contributor---our analysis says that 210 on the FAO index is the boiling point and we have been hovering there for the past 18 months."
There are certainly many other factors fueling mass protests, but hunger—or the desperation caused by its looming specter—is often the tipping point. Sometimes, it's clearly implicated: In Venezuela—where students have taken to the streets and protests have left citizens dead—food prices are at a staggering 18-year high.
"In some of the cases the link is more explicit, in others, given that we are at the boiling point, anything will trigger unrest. At the boiling point, the impact depends on local conditions," Bar-Yam says. But a high price of food worldwide can effect countries that aren't feeling the pinch as much. "In addition, there is a contagion effect: given widespread social unrest that is promoted by high food prices, examples from one country drive unrest in others."

In Thailand, where clashes between mass demonstrators and authorities in Bangkok have claimed multiple lives, food prices have been steadily rising. In 2012, a trend towards rising food prices prompted the UN to issue a warning: the poor will be hit hard, and unrest may follow. The nation's rampant inflation caused prices to continue to rise further still in 2013. Today, there are fatal riots.
In Bosnia, which erupted into violent conflict last week, high unemployment and hunger are prime drivers of a discontent that's been simmering for months. On February 9, Chiara Milan wrote "Today, after more than one year of protests and hunger, eventually the world got to know about [the protesters'] grievances."
Food shortages caused by drought helped spur Syria's civil war. High food prices helped precipitate the fare hike protests in Brazil. The list goes on.
The food riots in places like wealthy, socialist Sweden and the booming economies of Brazil and Chile highlight the fact that the cost of eating can fuel unrest anywhere; even in nations with robust democracies and high standards of living. With the inequality worsening across the globe, this is worth paying special attention to—lest we forget there are millions of Americans going hungry every year too.
So. The cost of food is high; discontent is raging. Thankfully, Bar-Yam's model sees at least temporary relief on the horizon.
"As to the trend for the next few months: Grain prices have gone down, starting with corn last summer," he says. "This has yet to propagate through the food system to lower prices, but they should drop soon. This may help reduce the unrest that is happening."
However, he emphasizes the structural threats to the global food system haven't been addressed. Bar-Yam has written at length about what he believes to be the root cause of food price swings: financial speculation and food-for-fuel policies like ethanol subsidies. Both, he argues, artificially drive up prices on the global market and, in turn, cause hunger and unrest. 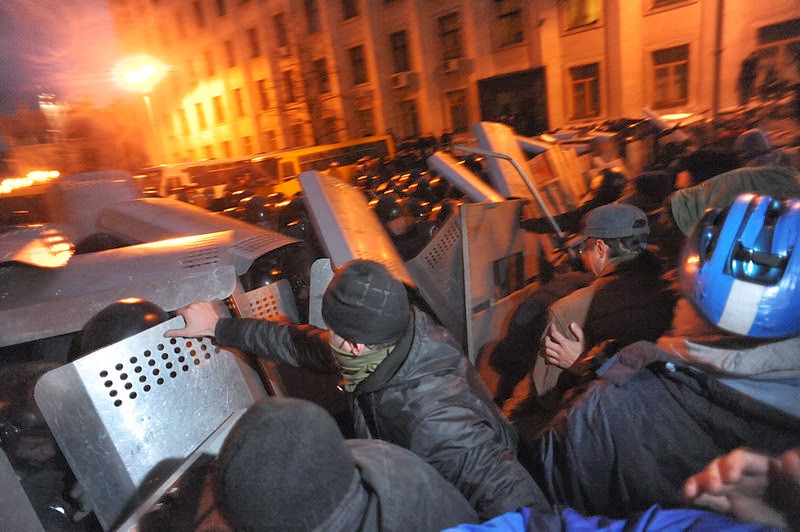 Whether or not the prices will drop, he says, hinges largely on US and European policy decisions.
"Everything now is very sensitive to what will happen with the ethanol mandate," Bar-Yam tells me. "The EPA has proposed not following the mandated increase this year, keeping it about the same as last year. There is a Senate bill to repeal the mandate sponsored by Feinstein and Coburn. The European Union has stated that it will implement a regulation of commodity markets (because of the impact on poor populations), and the CFTC is still fighting the market traders in trying to regulate the US markets."
The way the global food system works right now, with wheat, corn, and rice traded globally as commodities, domestic food production doesn't necessarily guarantee a population will get enough to eat. Ukraine, for instance, produced record amounts of wheat last year—but exported most of its gains. This web of imports and exports creates a global marketplace that is vulnerable to price shocks. That's why Bar-Yam believes that speculators and bad ethanol policy are essentially feeding global unrest.
"The main thing is that matters are very much in flux," he says. "We may still have higher food prices if the policies are not implemented but if they are, we may have a significant reduction in prices and lower unrest globally."
If not, in other words, the riots will burn on.
Below, watch 'Ukraine Burning," VICE News' report from Kiev: