Killer climate: tens of thousands of flying foxes dead in a day

This summer we have seen one of the most dramatic animal die-offs ever recorded in Australia: at least 45,500 flying foxes dead on just one extremely hot day in southeast Queensland, according to our new research. 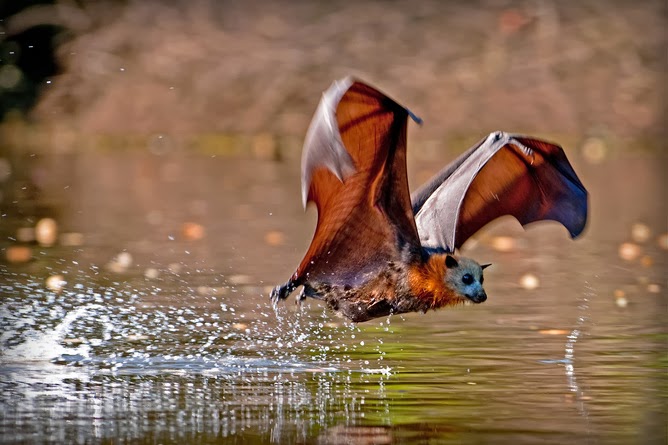 While flying foxes are often portrayed as noisy pests, they are protected native species, and declines in their populations have significant environmental ramifications as they spread seeds and pollinate native trees.
The mounting toll from repeated mass die-offs across eastern Australia is also significant because of what it tells us about the growing dangers we face from extreme heat.

Falling from the sky

At the beginning of this year, a severe heatwave developed over much of the central and eastern interior of Australia.
On January 4, northwest winds blew the heat to southeast Queensland, which is home to black, grey-headed, and little red flying foxes.
Record temperatures were recorded at nine locations, including Nambour (42.9°C), Beerburrum (43.4°C) and Archerfield (43.5°C). The hottest was Beaudesert, in the Gold Coast hinterland, where temperatures hit a withering 44.6°C.
Soon, social media outlets were abuzz with sightings of mass flying fox deaths, while news sites reported thousands of dead falling from the sky.
We coordinated a massive data-gathering effort to work out the extent of the die-off, visiting colonies between Gladstone in Queensland to the NSW border, and collating numerous reports from state and local government, wildlife care groups and concerned citizens. A young black flying-fox, orphaned during the mass die-off in southeast Queensland this summer. Paislie Hadley

The carnage we found was horrific. Some colonies had more dead than live animals, with thousands of corpses piled on the ground and hanging in trees. Council workers removed wheelie bins full of bodies, and wildlife carers were swamped with more than 1000 orphaned young flying-foxes.
Our current minimum estimate is that at least 45,500 flying-foxes died that day, in 52 of the 162 colonies we assessed.
All three species – black, grey-headed, and little red flying-foxes – were affected.
However, the more tropical black flying fox was by far the hardest hit (which was in line with previous findings), representing 96% of the dead. These deaths represent about half of the black flying fox population present in the region before the January heatwave, as estimated in surveys coordinated by the Queensland Department of Environment and Heritage Protection. 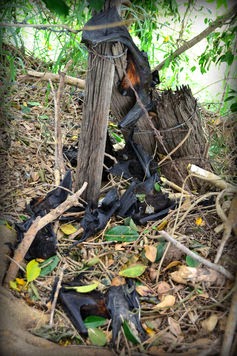 Clusters of dead flying foxes were found in and around colonies throughout southeast Queensland this summer. Justin Welbergen The mounting toll from extreme heat

This was not an isolated event. In 2008, Welbergen and colleagues showed that between 1994 and 2008, more than 30,000 flying foxes have died in 19 such events in Australia.
Since then, flying foxes have been dying from extreme heat almost every year. The worst deaths have happened during the heatwave that precipitated Victoria’s Black Saturday bushfires in 2009, which left more than 5000 dead, and in the first weeks of 2013’s “Angry Summer”, which left more than 10,000 dead.
This year’s die-off in southeast Queensland, the largest on record, was followed by others in Victoria and South Australia.
The threat to Australian flying foxes from extreme heat events is growing. According to the Intergovernmental Panel on Climate Change’s 2012 Special Report on Extremes it is “very likely” that the number of warm days has increased since the 1950s, and it is “virtually certain” that the frequency and magnitude of extreme heat events will increase through this century. Flying foxes play an important ecological and economic rolein the Australian landscape, including pollinating trees and dispersing seeds, which has been found to promote the resilience of native ecosystems to environmental change.
But unfortunately for flying foxes, and the ecosystem services they provide, recent political and legal changes have reduced protection for them.
In 2012, the Queensland government reintroduced permits to allow shooting of up to 10,500 flying foxes in orchards, in the process exempting them from humaneness requirements that apply for other native wildlife. New South Wales also allows shooting, although it is meant to end mid-year except under “exceptional” circumstances.
Apart from great white sharks, the two flying foxes declared“Vulnerable” under national environmental laws(spectacled and grey-headed flying foxes) are the only nationally threatened species for which regular culling is permitted.
The Queensland government now allows – and encourages – local governments to disperse flying foxes from urban colonies or destroy their roost sites without assessment. In December the Queensland government announced it would legislate to allow culling in flying fox colonies.
And there will soon be fewer constraints, with the federal government, as part of a drive to reduce environmental regulation, proposing to delegate to state governments decisions about developments and other actions likely to affect nationally threatened species.
The political heat around flying foxes has also intensified.Contrary to the advice of his health department, the Queensland premier has claimed that flying foxes are a major health hazard and threatened to send in “bat squads” to regional cities and towns where the state government thinks local councils are not doing enough to remove flying foxes.

Canaries in the coalmine

We know that heatwaves can be deadly for humans, as we have seen again in Australia this summer, as well as in the past in Europe and elsewhere.

Because flying foxes live in colonies, it is comparatively easy to determine the impacts of extreme heat events on the species as a whole. As such, flying foxes are excellent“bioindicators” of die-offs in species that have more cryptic or solitary lifestyles.
It is now clear that many of the environmental, social and economic impacts of climate change will arise from shifts in the regimes of extreme weather events, rather than from gradual changes in climate means. The impacts of extreme heat events on flying foxes provide a disturbing window into the future of Australia’s wildlife in a warming climate.
Posted by seemorerocks at 14:23