Turner News comes out with a new alert

I am putting this out because I have no reason yet to be anything other than agnostic about this.

There is a sharp divide between those who take this seriously and those who immediately dismiss this as disinformation.

This seems to be based on an idea that this station is associated with “Hal” Turner, a known racist. In fact, the station has new owners and they take pains to point out that the content has nothing to do with “Hal” Turner.

The other is that they are associated with NETC. I have received enough information to convince me that their information is not to be taken too seriously – but I am not sure if this is more as a result to do proper research (which includes historical readings) or as a result of malign misinformation.

At this juncture I am not willing to take these reports as the final word any more than statements coming out of Fairewinds on the subject.

Please take this as something that is (as is anything) requiring confirmation. Iwaki is a large center so this should come soon enough, even if only through alternative channels.

FLASH: RADIATION IN IWAKI CITY, FUKUSHIMA, JAPAN SKYROCKETS TO FROM 225 TO 21000 !!! RESIDENTS URGED TO EVACUATE THAT CITY IMMEDIATELY AS RADIATION REACHES LETHAL LEVELS OVERNIGHT; WINDS TO CARRY THAT RADIATION TO U.S. WEST COAST IN TWO DAYS 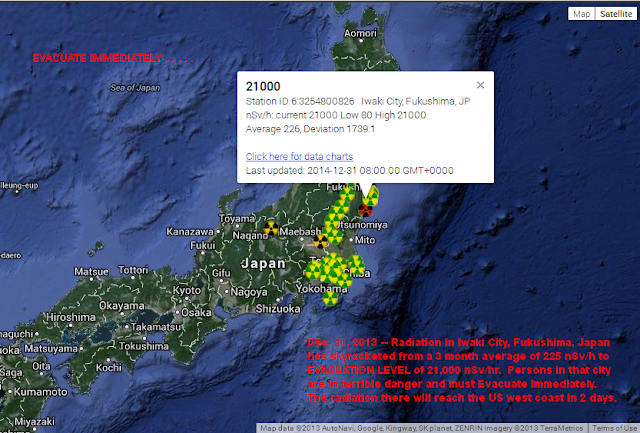 Residents of Iwaki City, Fukushima, Japan should EVACUATE THE CITY IMMEDIATELY due to lethal radiation levels occurring there right now.  According to the Nuclear Emergency Tracking Center (NETC), radiation levels in that city, which have averaged a level of 225 per hour over the last three months, have skyrocketed to 21,000 per hour.

This level of radiation is extremely dangerous and potentially lethal.  It is likely to reach the U.S. west coast in two days.