The return of the freezing weather 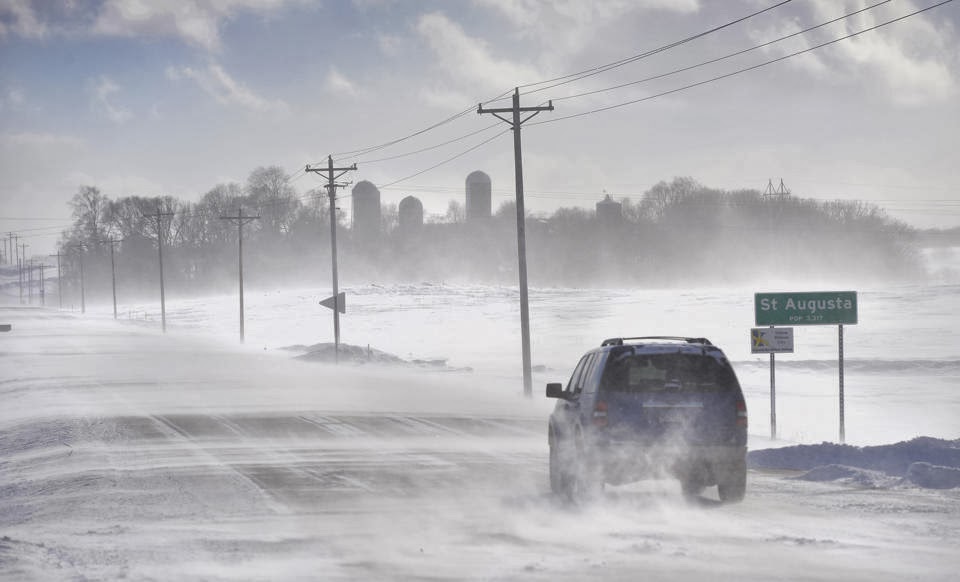 CHICAGO (AP) — A persistent weather pattern driving bitterly cold air south out of the Arctic will cause temperatures from Minnesota to Kentucky to plummet Monday, turning this winter into one of the coldest on record in some areas.

For about 2½ days, actual temperatures will range from the teens to below zero, and the wind chills will be even colder, minus 43 in Minneapolis, minus 23 in Milwaukee and Chicago, minus 14 in Kansas City, Mo., and minus 3 in Louisville.

In fact, the National Weather Service says most of the Midwest will feel far colder than Monday's expected high in the nation's northernmost city, Barrow, Alaska — minus 4.

National Weather Service Meteorologist Scott Blair stopped short of calling the latest round of cold part of the polar vortex, which are winds that circulate around the North Pole.

"There's really nothing abnormal about the air that's coming into the area," he said. "It's just been a very persistent pattern" of cold air.

He said it's an amplified pattern of the jet stream, and cold air is filtering in behind a large trough of low pressure. He explained further: "Troughs are typically associated with unstable or unsettled weather, and, at this time of the year, much colder air."

In the Chicago area, residents were bracing for a historic deep freeze. Monday's high was expected to be minus 4 degrees, and it could get as low as negative 17 downtown, with wind chills as low as 40 below. Such temperatures are expected to hold into Tuesday.

If Chicago makes it to 60 hours below zero, it will be the longest stretch since 1983, when it was below zero for 98 hours, and the third longest in 80 years.

Chicago resident Matt Ryan, 19, was headed to his family's house in the suburb of Oak Park on Sunday.

"I came home to steal a scarf from my parents," he said. His plan for Monday: Dress in layers, carry hand warmers and wear long underwear.

Ryan said he was a little excited that classes were going to be canceled at the University of Illinois at Chicago, but that he'd never seen a winter so intense.

Chicago Public Schools called off Monday's classes for its nearly 400,000 students a day in advance, as did suburban districts. Earlier this month, when it was below zero for 36 straight hours, CPS closed for two days.

North Dakota and South Dakota residents dealt with dangerous cold Sunday and wind gusts that reached up to 60 mph. The high winds led to blowing snow that made it nearly impossible to travel in some parts.

"This is definitely the most widespread event we've had this year," said weather service meteorologist Adam Jones in Grand Forks, N.D.

Snow and high winds in Indiana led officials there to restrict vehicle traffic or recommend only essential travel in more than half of the state's counties. And Iowa officials said the combination of snow and high winds would make traveling dangerous; forecasters there called for wind chills to be as low as 40 below zero on Monday.

In Michigan, snow on the roads and deep subfreezing temperatures contributed to multiple crashes Sunday that forced expressway closings. And on Saturday night, two people were killed in Grand Haven Township in western Michigan because of similar weather conditions, authorities said.

Alex Alfidi, manager at Leo's Coney Island restaurant in the Detroit suburb of Birmingham, said the extreme winter weather is hurting his business.

"We slowed down big time," Alfidi, 39, said, noting that while he's been getting some carryout business, the casual walk-in customers have been staying away.

He also said it's hard for him and his employees to get to and from work in the snow, ice and cold. Sometimes, the 24-hour restaurant is operating with just him and a waitress.

Alfidi said he has seen some challenging winters in 15 years in Michigan, but none as bad as the current winter.

"This is the biggest one," he said. 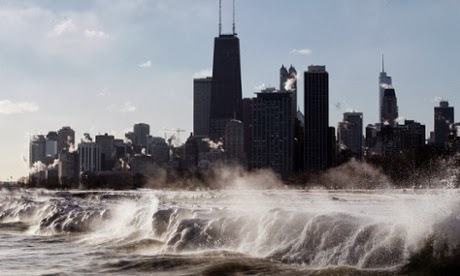 A second deep freeze in weeks seized the US mid-west on Monday, prompting schools to close, airlines to cancel flights and the mass mobilization of emergency crews to dig out major roadways.

From Chicago, where parents were forced to bringing their children to work or call in sick to stay home and care for them, to South Dakota, where officials were warning about treacherous driving conditions, this latest round of sub-zero highs in many parts of the mid-west had many people wondering when it would end.

"I'm moving to Alaska where it's warmer," Kathy Berg said in jest – though it is in fact true of current weather conditions – as she arrived by train for her job in Chicago wearing a long-sleeved T-shirt, sweatshirt, polar fleece hoodie, winter coat, knit cap, two scarves and two pair of gloves.

A persistent weather pattern that is driving Arctic air south was forecast to force temperatures to plummet for about two and a half days, starting overnight on Sunday.

Temperatures will range from the teens in northern Kentucky to double-digits below zero in Minnesota, but even colder wind chills were expected: -43F in Minneapolis; -18F in Dayton, Ohio; -14F in Kansas City, Missouri; and -3F in Louisville, Kentucky.

By sunrise on Monday, weather forecasters in Chicago were telling viewers that the high temperature for the day had already come and gone and that the low may reach -4F with wind chills at -40.

It was the same in Nebraska and Iowa, where the weather service issued warnings for both sub-zero temperatures and wind chills that could reach -40F – a forecast that had Amy Henry, an employee at a 24-hour drug store in Omaha, thinking enough was enough. "I just look at my [apartment] pool every day and say, 'Oh, come on, summer'," said Henry, 36.

Meanwhile, at Donutville USA in the Detroit suburb of Dearborn, two men said they were not going to let a little cold keep them from their morning cruller. "We're here every day – we never miss," said Angelo Barile, a 72-year-old retired owner of an Italian bakery.

Travelling in many places remained treacherous on Monday. Officials in many states urged people to stay off the roads, including in Indiana, where 50mph gusts were recorded early in the day. And in Michigan, parts of which have experienced their snowiest January on record, weather-related crashes killed three people over the weekend and roads remained slick.

On Monday, snow drifts kept Interstate 29 closed from Sioux Falls to the Canadian border before reopening in the morning.

Travel remained difficult in Chicago. Airlines had cancelled more than 1,000 flights at the city's two major airports during the last cold snap, and the city's aviation department said by Monday morning more than 500 flights already had been cancelled this time. At Union Station, some early morning trains were cancelled, leaving frustrated travellers to wait until the afternoon before they could get trains out of the city.

Meanwhile, homeless people looking to stay warm kept a watchful eye for security at the station, knowing if they stayed in one place too long they would be moved on. "You have to keep moving around," said Von Khan, 67, who carried big shopping bags in each hand and a backpack slung over his shoulder.

Frigid temperatures are expected to hold into Tuesday. If Chicago makes it to 60 straight hours below zero, it would be the longest stretch since 1983, when it was below zero for 98 hours, and the third longest in 80 years.

Chicago public schools cancelled Monday's classes for its nearly 400,000 students, as did some suburban districts and schools in Michigan and elsewhere. That forced Kristelle Brister, the manager of a Chicago Starbucks, to bring her nine-year-old son into the store where other employees scrambled to keep up with orders.

"We had two [employees] call in because they couldn't come to work because of the school closings and another called in sick," she said. "It's hard."

Business is far from usual this winter for Alex Alfidi, manager at Leo's Coney Island restaurant in the Detroit suburb of Birmingham. His 24-hour restaurant been getting some carryout patrons, but the casual walk-in customers have stayed away. "We slowed down big time," said Alfidi, 39. He said he's logged some challenging winters in his 15 years in Michigan. "This is the biggest one," he said.

Posted by seemorerocks at 13:42