Propane shortage reaches emergency levels
With frigid temperatures expected to continue, suppliers are rationing propane and officials are urging consumers to conserve it. Some accuse suppliers of price gouging 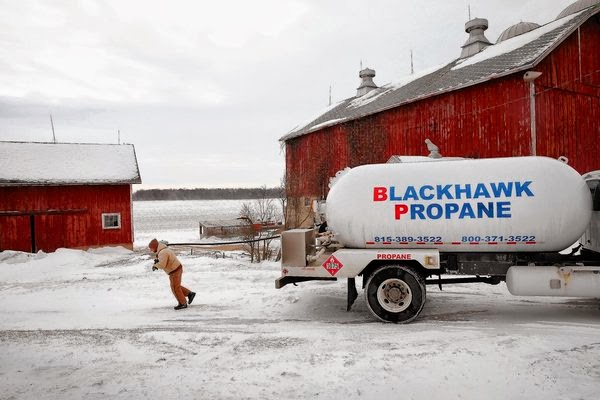 
WASHINGTON — As brutally cold temperatures continue to blast much of the nation, a propane shortage is driving up heating bills, prompting accusations of price gouging and leading to energy emergencies in more than a dozen states, from Alabama to Michigan.

The lack of propane has forced the closing of schools in Tennessee, led to calls for people to turn down their thermostats and given poultry farmers the shivers.
"They're worried they might not be able to keep those chickens warm," said Jeff Helms of the Alabama Farmers Federation.

And consumers are grousing about higher prices.

"It looks like there's some price gouging going on," said Phillip Wallace, director of schools in Stewart County, Tenn., which were closed Thursday and Friday because they were short on propane for heating classrooms. The district was due to receive 2,000 gallons. But Wallace complained the propane cost $3.45 a gallon, up from $1.29.

This winter has been exceptionally cold in large parts of the country. In early January the much-ballyhooed "polar vortex" sent temperatures plummeting in the Midwest, Northeast and even parts of the South. Minnesota, no stranger to winter weather, canceled school because of the cold.

With frigid temperatures expected to continue, suppliers are rationing propane and officials are urging consumers to conserve fuel. About 6 million households nationwide, including many in rural areas, use propane to heat their homes.

"We did advise people to be very aware of their propane usage and reduce use and monitor it very carefully," said Judy Palnau of the Michigan Public Service Commission.

Propane stocks are down 42% from a year ago. The average residential price, $2.96 per gallon, is 68 cents higher than a year ago — the highest since the U.S. Energy Information Administration began tracking prices in 1990.

Rep. Dan Benishek (R-Mich.), citing price hikes to more than $6 a gallon in his state, sent a letter to President Obama on Friday urging him to make federal energy assistance available.

"It can be $700 more to fill your tank than it was yesterday — if they can get the propane," said Mark Wolfe of the National Energy Assistance Directors' Assn.
With some suppliers in the Midwest running out of propane, 24 states have eased rules to allow truckers to drive longer hours to pick up and deliver the fuel. One county in Wisconsin has offered shelter to residents unable to heat their homes.
"Some of the marketers are going around, home to home, seeing who is near empty and giving them gas," said Jeff Petrash, vice president and general counsel of the National Propane Gas Assn.

Texas, which produces two-thirds of the nation's propane, has received calls from as far away as Maine for fuel, according to the Texas Propane Gas Assn.
The shortage, industry officials say, is due to a confluence of events: a Midwest pipeline being shut down for maintenance, a high demand for propane last fall to dry a rain-soaked harvest of corn, competition for pipelines and rail cars caused by increased oil and natural gas production — and the extreme cold.

"I prefer not to call it a shortage," said Simon Bowman, a spokesman for Pennsylvania-based AmeriGas, the nation's largest propane retailer. "I prefer to call it tight supply.

"There is propane to be had, but it's just having problems getting to some of the areas of the Midwest and Northeast," he added.

But some are suspicious about what's behind the lack of propane.

Sen. Charles E. Grassley (R-Iowa) has called on the Federal Trade Commission to investigate to "ensure that any supply shortages are not created artificially."
Indiana state Sen. Richard Young, a Democrat, said businesses in his state had driven all the way to Kansas for propane, "only to be told by the distributor that no fuel will be sold due to the shortage."

"Other businesses tell me they have driven to Missouri and Texas for fuel, having to pay incredibly high prices for transportation and purchase," Young added.

"We've got a long way to go until spring," he said.