More on Turner News and Fukushima.....

This article from ENENews has appeared today.

It is an example of where I can definitely take issue with them. They quote a Wikipedia item that seems to me to be out of the picture.

The racist and holocaust denier, “Hal” Turner, seems to be definitely out of the picture.

"Welcome to the Turner Radio Network. As of December, 10, 2010, this web site is under new ownership. The former owner, radio host Hal Turner, was Ordered by United States District Court Judge Donald Walter, to divest himself of control or ownership of all websites after his conviction at a THIRD federal trial of "Threatening" federal officials. He is not allowed to own, control or contribute content to web sites until the end of his probation in October, 2015. Therefore, Hal Turner no longer has any connection whatsoever to this web site and does not contribute to its content.."

So, shoddy investigation on that front. Having said that it still begs the question of who they ARE, and why they seem to be privy to this information.

ENENews also dismiss an article from the Ecologist. Both Oliver Tickell (who writes for the Guardian) and the Ecologist have the highest credentials and the article is along the lines of what I might want to write if I wasn't in possession of all the facts.


Gizmodo Report Claims: “Fukushima could be in the middle of another meltdown”
300th most popular website in U.S. publishes “unsubstantiated rumor”

Gizmodo, Dec. 31, 2013: “Mystery Steam Over Fukushima Could Be Sign of Another Meltdown [...] The newest update in the highly disconcerting series of devastating failures that is the Fukushima cleanup effort is troubling to say the least. Tepco has confirmed that (unexplained) plumes of steam have been rising from the mangled remains of Reactor Building 3. In other words, there’s a chance Fukushima could be in the middle of another meltdown. The thing is, no one has been able to find out the exact cause of the rising, mysterious radioactive steam because the combination of physical damage and, more importantly, lethal radiation levels have made investigating the reactor impossible. Tepco has known that a followup meltdown was a severe possibility, though. [...]”
This Gizmodo report cites an article at ‘The Ecologist’ website, which doesn’t link to any evidence supporting their claims. In fact, there’s only one link throughout the entire piece — and it’s to an article by the ‘Turner Radio Network‘.
EXSKF has written about the many problems with the claims being made by the ‘Turner Radio Network’. Earlier today SimplyInfo addressed unsubstantiated rumors concerning Unit 3. Wikipedia has some additional information about the ‘Turner Radio Network’ website


Fukushima meltdown? Mystery steam rising over Reactor 3
Unexplained plumes of radioactive steam have been rising from Fukushima's Reactor Building 3, Could a major meltdown be on the way? 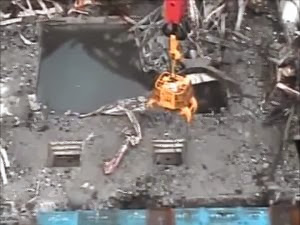 
Fukushima's Reactor Building 3 exploded on 13th March 2011 as a result of a hydrogen buildup, breaching the building's containment and emitting a huge plume of radiation. The reactor itself is in meltdown.
And now fresh plumes of steam have been seen coming out the structure. These have now been confirmed by Tepco, the owner of the nuclear plant, from 19th December onwards. The company believes the steam is coming from the fifth floor of the building.
However it does not know the cause of the steam. Lethal levels of radiation and the physical damage to the structure have so far made entry and inspection impossible.
Possibility 1 - a meltdown is taking place
The Reactor 3 fuel storage pond still houses an estimated 89 tonnes of the plutonium-based MOX nuclear fuel employed by the reactor, composed of 514 fuel rods.
Ever since the explosion Tepco has been concerned that if the spent fuel storage pond dries out, the intensely radioactive spent fuel rods would melt down and produce further significant radioactive emissions.
One possibility is that this process may now be taking place. In the event of water loss from the pond, the water would begin to overheat and produce clouds of steam, prior to a complete meltdown. If this is the case then a second major nuclear disaster at Fukushima is in the making.
Possibility 2: 'corium' has reached groundwater
Reactor 3 itself contained 566 fuel rods, and has experienced a complete meltdown. The location of the molten fuel, known as 'corium', is unknown, but it may have burnt its way through the reactor base and entered the underlying soil.
This would also produce steam as the hot corium came into contact with groundwater, while also releasing radioactive contamination to make its way into the Pacific Ocean.
Possibility 3: rainwater on stray fuel elements
An alternative explanation is that the steam plumes could be caused by stray fuel pellets and reactor rod fragments - which themselves produce significant amounts of heat - coming into contact with rainwater percolating through the damaged and roofless structure. Of the three choices this is probably the least serious.
The Turner Radio Network is advising people on the West Coast of North America to "prepare for the worst" in case a meltdown of the waste fuel is in fact commencing. No official warnings have been released on either side of the Pacific.