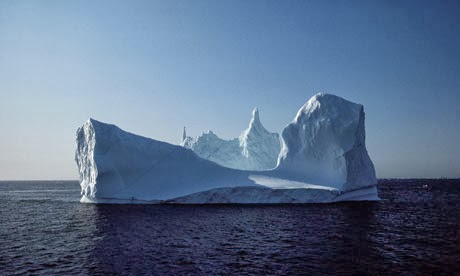 Dramatic methane releases from the Arctic Ocean seafloor have been documented at this blog over the past few months. While the most recent IPCC figures for emissions from hydrates and permafrost are only 7 Tg per year, a recent post estimates current emissions from hydrates at 99 Tg per year, a figure that is growing rapidly. Furthermore, as discussed in an earlier post, the IPCC's estimated annual increase in global methane levels may seem small, but this figure appears to be based on low-altitude data collected over the past few decades.

These high methane releases undoubtedly contribute to higher global levels, but they may not (as yet) translate into higher global averages due to the way data are collected and figures are averaged and calculated.

Global levels can be calculated by adding up and averaging readings from all measuring stations around the world. This works well for conventional emissions such as from wetlands, from agriculture or from burning fuel. Such emissions originate from numerous land-based sources that are spread out over large areas, while each emitting relatively small quantities of methane periodically or continuously, which makes it easy for hydroxyl to brake down this type of methane before it rises up into the air. Thus, such emissions can be relatively easily measured from land-based measuring stations.

There are only a few measuring stations in the Arctic and they are all land-based, making that measurements can be taken at altitudes that are too low to capture the full scale of the methane concentrations that have formed as a result of methane releases from the Arctic Ocean seafloor over the past few months. The local nature and further characteristics of releases from the Arctic Ocean can make that they are underestimated or even ignored in measurements taken at land-based stations and in global levels that are calculated from such data.

The situation can be tested by looking at peak levels of methane showing up at specific altitudes, as measured by satellite sensors, specifically at two altitudes, i.e. at 14,385 Ft (or 4,385 m) and at 19,820 Ft (or 6,041 m), since methane as measured by the IASI MetOp polar-orbiting satellite shows up most prominently at these altitudes over the Arctic. Thus, to detect methane originating from hydrates under the Arctic Ocean, it's best to look at peak levels at these altitudes. The image below shows IASI data available in January 2013 and in January 2014, for these two altitudes. 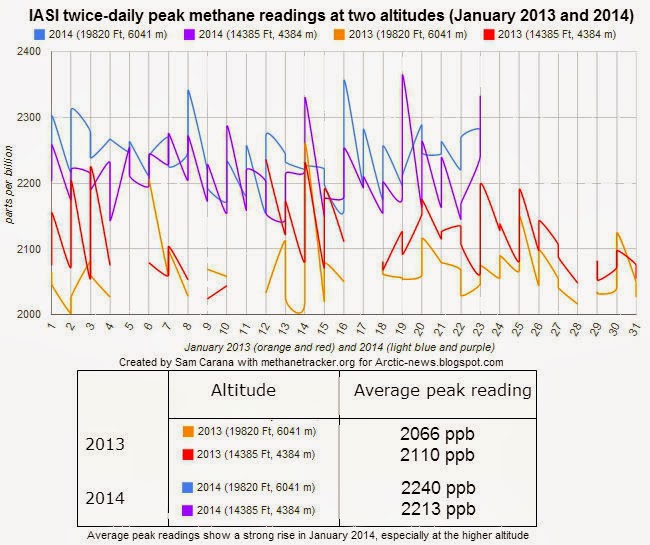 The results of this analysis are quite disturbing, for two reasons. Firstly, January 2014 peak levels have increased strongly, compared to January 2013 peak levels. Secondly, the rise in average peak readings has been most dramatic at the higher altitude (from 2066 ppb in 2013 to 2240 ppb in 2014).

This suggests that huge quantities of methane have indeed been released from hydrates under the Arctic ocean, and that much of the methane is rising and building up at higher altitudes. The increasing appearance of noctilucent clouds further confirms indications that methane concentrations are rising at higher altitudes.

Of course, the above analysis uses a limited dataset, but if verified by further analysis, it would confirm a dramatic rise in the presence of methane in the atmosphere due to releases from hydrates. Moreover, it would confirm the immensity of threat that releases from the Arctic Ocean will escalate and trigger runaway warming. The risk that this will eventuate is unacceptable, which calls for comprehensive and effective action such as discussed at the ClimatePlan blog.