Traders reacted to concerns that Argentina, Turkey, South Africa among others might be on the brink of currency crises 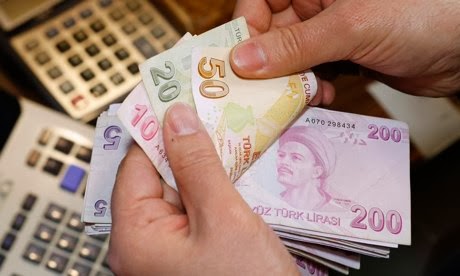 
A series of political scandals and accusations of mismanagement in some of the world's major developing economies triggered turmoil on international stock exchanges on Friday.


The FTSE 100 fell more than 100 points, or 1.6%, and the US Dow Jones dropped 1.2% as traders reacted to concerns that Argentina, Turkey, South Africa and several vulnerable Central American nations might be on the brink of a currency crisis. Political instability in Ukraine and the nose-diving Venezuelan economy added to the nervous atmosphere on exchanges, which have spent the last few weeks galloping ahead on the back of stronger growth forecasts in the US, UK and Japan.


Central banks waded into the markets in an effort to stabilise currencies that were rapidly depreciating in an emerging markets selloff.


In the wake of the collapse of the Argentine peso, which kickstarted the latest wave of selling, the Turkish lira hit record lows despite spending an estimated £1bn to prop up the currency's value during the day. The rouble and the rand languished at levels not seen since the 2008-09 financial crisis.


Some analysts blamed profligate government spending and corruption for the turmoil affecting some countries. Turkey is in the grip of a corruption investigation that has come close to the prime minister, Recep Tayyip Erdogan, while Ukraine's president, Viktor Yanukovych, is facing violent protests that have spread from the capital, Kiev.


Others blamed weakening demand for raw materials as the Chinese economy slows. The US recovery, which will attract investor funds previously parked in developing countries to earn a bigger return, is another destabilising factor.


"With expectations rising that the Fed will continue to taper [quantitative easing] next week, de-risking is continuing to see capital flow into safer havens with gold, the Japanese yen and the US dollar the main gainers," he said.


In Turkey, the central bank has refused to raise interest rates, even though the lira has fallen almost 9% this month, raising fears of mounting inflation and an exodus of investors.


Despite a fire sale of about $1.65bn (£1bn) to calm investors' nerves, a move that removed almost a 10th of its reserves, the lira dropped almost 2%.


RBS analysts said: "The [Turkish central bank] simply does not have enough firepower to fight the pressure against the lira. It has now exhausted its 'no hike' toolkit and its next major policy action will have to be a straightforward increase in the lending rate."


The lira is only one of many currencies feeling the heat from investor worries. Central banks believed to have intervened to defend their currencies include India, Taiwan and Malaysia. Russia propped up the rouble after $350m in hard currency sales.


Countries that have relied on huge inflows of investor funds over recent years also suffered in the jittery atmosphere. The rupee, the Brazilian real, the rouble and the rand all fell by more than 1% against the dollar. The Russian currency also hit a record low to the euro.


Investors have withdrawn about $4bn from emerging market stock exchanges so far this year.


The central bank said it had decided to loosen strict foreign exchange controls, abandoning its long-standing policy of supporting the currency through interventions.