Climate change in the Philippines

The vulnerable island chain that is the Philippines already sits on the firing line of tropical storm devastation. During a typical year, about 20 tropical cyclones roar ashore, wrecking all sorts of havoc. In a typical year, this amazing parade of such cyclones begins in June.
But now it appears that weather in the Philippines, which was already rather extreme, has gotten much worse. For so far, this island nation has been treated to a tropical storm season that hasn’t ended for at least 20 months. The storm season didn’t end in 2013, when January 1rst saw the formation of that year’s first tropical cyclone. And the season didn’t end with the winter of 2014 when the devastating rainmaker that was Tropical Storm Lingling formed on January 10th. 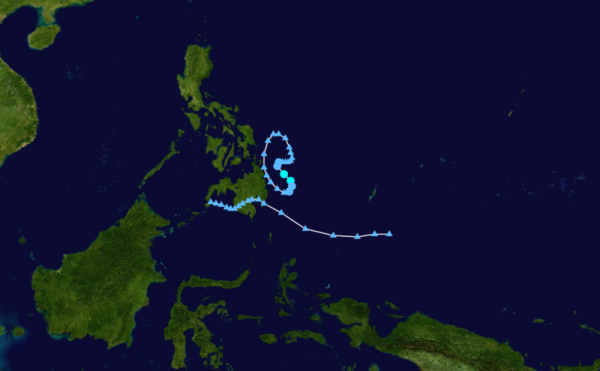 (Lingling Track. Image source: Commons)
Lingling developed to the east of the Philippines over a pool of abnormally hot and deep warm water. Temperature anomalies for this region ranged up to 2.5 C above average. Perhaps more importantly and more ominously, the depth of this abnormally warm water extended far below the surface.
In a Deepening Pool of Hot Water
Such strange and anomalous conditions are expected under a regime of intensifying human-caused warming. In the hottest regions of the ocean, evaporation is expected to intensify as warmth increases. Eventually, the surface water becomes saltier as it becomes hotter, causing it to sink. This mechanism transfers heat deeper and deeper into the world’s tropical oceans. This process is the start of a dangerous ocean turnover. One related to hypoxia, ocean current changes, and stratification. And it appears that just such a perilous heat transfer is beginning in a region of the Pacific east of the Philippines.
We won’t go too far into detail about the initial signs of tropical ocean warming and turnover or its other hazards and implications here. However, suffice it to say that a deepening hot water pool in this region of the world appears to, at this time, be having a profound impact on storm formation and strength. Namely, it has spawned the almost constant progression of storms mentioned above. A hurricane season without end for two years. It is also the mechanism that, according to NOAA fueled the extraordinarily powerful Typhoon Haiyan, one of the strongest storms on record, which devastated the Philippines in November of 2013.
Now the same zone has spawned the epic rainmaker that is Lingling to again harry the Philippines just two months later.
The Storm that Wouldn’t End Forces More Than a Million to Flee
Lingling formed over this anomalously deep, hot water then marched in through the southern reaches of the Philippines where it has been dumping copious amounts of rain over the islands ever since. You can note the almost zero movement of the cyclone from January 11 to January 23 in the MODIS image sequence below: 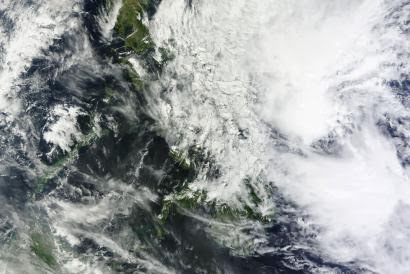 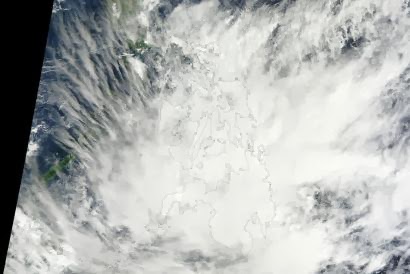 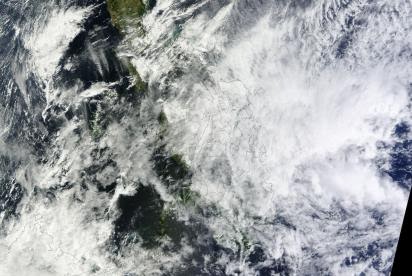 (Lingling January 11, 16 and 23. Image source: Lance-Modis)
By January 22nd, over the course of 11 days of near-biblical flooding, the storm had inundated some parts of the Philippines with an astonishing 52 inches of rainfall, more than the amount New York receives in an entire year. By today, the never-ending deluge had resulted in 1.14 million evacuated, 63 missing, and over 54 lost lives. Numerous bridges and dams were also destroyed by the flooding, along with hundreds of homes. This, just two months after the strongest tropical cyclone ever to make landfall struck the northern part of this vulnerable island chain.
And with the anomalous January formation of a devastatingly persistent Lingling, there is simply no respite.
Jet Stream Lag, Stalled Fronts, and Hot, Deep Water
Lingling’s persistence over the Philippines for so long can be attributed to numerous factors. First, the storm was caught up in a stalled frontal boundary whose tail end had snagged over the Philippines for about 15 days running. The front itself was caught up in a Jet Stream trough shoved south by a disrupted and collapsing polar vortex (one that currently appears to be in the process of getting ripped in half). So Lingling became indirectly linked with polar amplification related events further north.
The stalled frontal boundary and related Jet Stream lag also resulted in Lingling remaining parked over hot Pacific waters of great depth. Normally, the cyclonic action of the storm would pump cooler, deeper waters to the surface and result in the storm’s weakening. Unfortunately, the deeper waters were also quite warm, so Lingling maintained enough strength to continue dumping epic amounts of rain over the Philippines for two weeks straight. 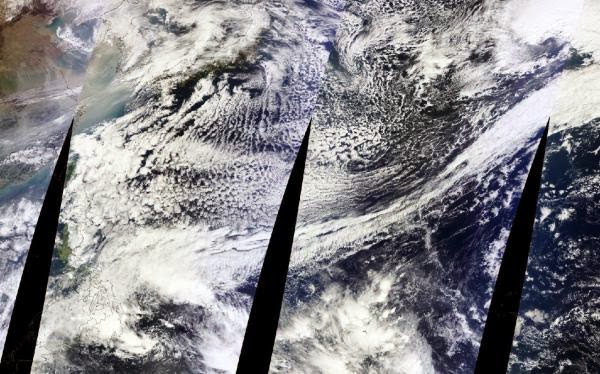 (Lingling, lower left, entangled in frontal system stretching all the way across the western Pacific on January 20, 2014. Front entanglement in a fixed Jet Stream pattern and related stalled frontal boundary helped result in Lingling’s 2 week persistence. Image source: Lance-Modis.)
This combination of conditions: hot, deep water, exceedingly early tropical storm formation (such that there is essentially no end to the Pacific cyclone season) and a lagging, persistent Jet Stream pattern resulting in an entirely abnormal storm event are unlikely to have occurred without the added weather forcing of human caused warming.
Unfortunately, the Philippines, at least for this year as in 2013, are likely to expect storm formation and impact to continue on throughout the year. Water conditions are certainly warm enough. So we will likely see the current 20 month storm season continue for another 11. A shift in winds, blowing the warmer waters east with an El Nino might bring some brief respite. But with human caused climate change pushing temperatures ever higher, we are likely to see the waters continue to warm, eventually over-riding such variability. In the end, the Philippines is indeed likely to see a never ending storm season.
Links:
Four Feet of Rain Floods the Philippines
More than a Million Forced From Their Homes by Lingling
NASA Lance-Modis
Commons
NOAA: Deep, Warm Water Fuels Haiyan Intensification
Through the Looking Glass of the Great Dying
190 mph Monster Cyclone Now the Strongest Hurricane Since 1980
Arctic ‘Heat Wave’ to Rip Polar Vortex in HalfHat Tip to Colorado Bob