5.4 magnitude earthquake shakes Canary Islands: one of the largest tremors ever

December 27, 2013 – CANARY ISLANDS – Something is going on under El Hierro, and recent events suggest this time things could be dramatically different. Two years after a new underwater volcano appeared offshore of El Hierro in the Canary Islands, earthquake swarms and a sudden change in height suggest a new eruption is brewing near the island’s villages, officials announced today (Dec. 27). After the announcement, one of the largest temblors ever recorded at the volcanic island, a magnitude-5.4 earthquake, struck offshore of El Hierro at 12:46 p.m. ET (5:46 p.m. local time) today, the National Geographic Institute reported. Residents on the island reported strong shaking, and the quake was felt throughout the Canary Islands, according to news reports. The earthquake’s epicenter was 13 miles (22 kilometers) deep. Before the earthquake struck early this afternoon, the island’s volcano monitoring agency, Pelvolca, had raised the volcanic eruption risk for El Hierro to “yellow.” This warning means that activity is increasing at the volcano, but no eruption is imminent. A similar burst of activity prompted a yellow warning in June 2012, but the volcano soon quieted down. –TEP, LS

December 27, 2013 – CANARY ISLANDS – Although earthquakes have largely ceased for the moment, the island experiences ongoing rapid inflation and harmonic tremor, both signs that an eruption could be imminent. The inflation in the SE part near El Pinar and La Restinga has reached almost 10 cm in just a few days by now. Instead of new earthquakes, harmonic tremor (steady low-frequency ground vibration) has appeared 2 days ago and since then been gradually increasing. Both observations, as well as some single long-period earthquakes in the past days, are indicators of magma moving into the system and pressurizing it. This means that the scenario of a new eruption has become more and more likely. It is impossible to say whether and when a new eruption will occur, but it could happen quickly any time. It would probably begin with a series of stronger earthquakes to open up a conduit. Based on the inflation and earthquake patterns, the most likely area would be near the 2011 vent near La Restinga, perhaps even on land. In this case, La Restinga would be the village most at risk. The previously detected very high Radon gas emission values also suggest the presence of new magma and pose a health risk particularly in closed low-lying rooms of buildings especially in southern El Hierro. –Volcano Discovery

"THIS IS REAL!"
RSOE EDIS - Emergency and Disaster Information Service:

Long predicted by Oceanographers and Volcanologists. Could a mega tsunami starting in the Canary Islands really hit the USA?

Meanwhile, scientific research is predicting that an eruption of the Cumbre Vieja volcano, at La Palma in the Canary Islands would result in a massive mega-tsunami that would reach the East Coast of America.

Geological evidence suggests that during a future eruption, Cumbre Vieja Volcano on the Island of La Palma may experience a catastrophic failure of its west flank, dropping 150 to 500 km3 of rock into the sea. Using a geologically reasonable estimate of landslide motion, we model tsunami waves produced by such a collapse. Waves generated by the run-out of a 500 km3 (150 km3) slide block at 100 m/s could transit the entire Atlantic Basin and arrive on the coasts of the Americas:
(https://www.facebook.com/permalink.php?story_fbid=537182353045151&id=139170976179626) 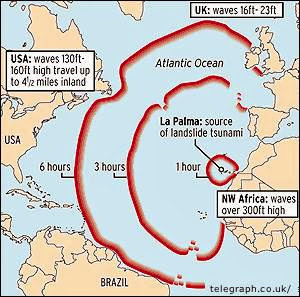