Oil Pipeline Explodes In China, Killing 35 And Setting The Ocean On Fire
An oil pipeline exploded in Qingdao in China on Friday, killing 35 people and injuring 166 by the latest count. 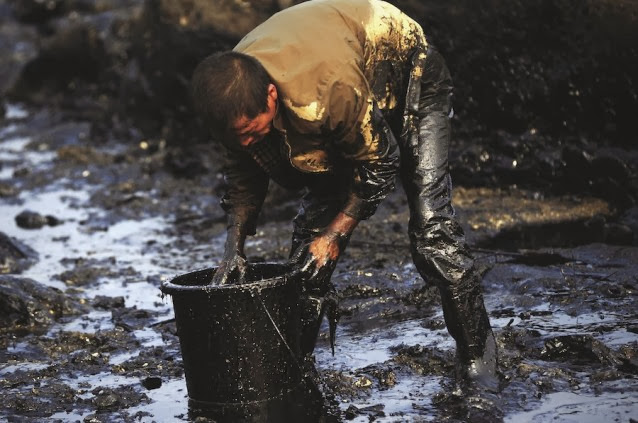 
The explosion spilled oil into the ocean, and temporarily shut down one of China’s largest crude import terminals.

The pipeline is owned by Sinopec Corp, China’s largest oil refiner, and connects Huangdao to Weifang in the northeastern province of Shandong. It began leaking oil into Qingdao’s streets and port early Friday morning. The pipeline was shut off about 15 minutes after the leak began, and workers began repairs. Then, around 10:30 a.m. (9:30 p.m. Thursday EST) the oil caught fire and exploded in two locations.

The underground pipeline’s explosion opened a hole in the road that swallowed at least one truck, according to Reuters, and oil seeped into utility pipes under Qingdao. Gas and oil exploded and caught fire over the sea, according to the Qingdao Environmental Protection Bureau, and barriers were set up to keep it from spreading further than the 32,000 square feet already contaminated.

It is as yet unclear how Sinopec’s Qingdao refinery, which processes 240,000 barrels per day of imported crude, would be affected.

China’s last major oil spill occurred in 2010 in Dalian, another northeastern port, when two pipelines exploded, spilling between 18 and 27 million gallons of oil into the Yellow Sea, at least as much as the Exxon Valdez disaster.