Given what is happening around the world I am not a big one on politics – at least in the sense of parliamentary shennanigans.

All governments in the current rush to collapse are corrupt. But to my Austalian friend who is disenchanted with Gillard and thinks Tony Abbot might be better, I've only one thing to say – good luck to you mate – if your think fascism is preferable...

Rudd to be sworn-in as PM again
Kevin Rudd will be sworn in as prime minister of Australia again on Thursday. 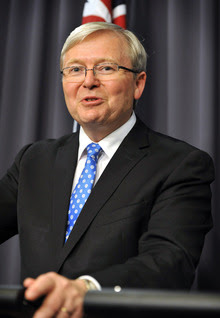 Three years after the Labor Party cacucus dumped him in favour of Julia Gillard, he beat her by 57-45 votes in a leadership ballot on Wednesday night. Two previous attempts at a comeback failed.

Mr Rudd was prime minister of Australia from the general election in 2007 until 2010 when he was deposed by Ms Gillard.

Having vowed to quit politics if she should lose, Ms Gillard will leave Parliament at the general election.

Foreign minister Bob Carr said he and his colleagues had acted in the best interests of the country.

Mr Rudd has promised to unite the Labor Party and take the fight to Opposition Leader Tony Abbott in the upcoming election on 14 September.

But his return has triggered an avalanche of departures from not only the ALP frontbench, but from their side of the Parliament. 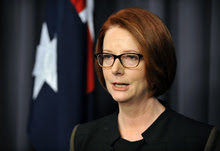 The ABC reports more ministers are expected to step down.

Mr Rudd thanked Ms Gillard for her work as prime minister, praising her as a "woman of extraordinary intelligence, great strength, and great energy".
"She has been a remarkable reformer," he said.

Ms Gillard earlier called on the party to "put its divisions behind us".

"I understand that at the caucus meeting today, the pressure finally got too great for many of my colleagues," she said.

Mr Swan said it had been a privilege to serve with Ms Gillard.

"She is one of the toughest warriors that have ever led the Australian Labor Party," he said.

"I think she's done more as a politician for our country in three years than many other politicians could ever hope to achieve."

Mr Abbott said once again the "powerbrokers of the Labor Party" had decided who would be the nation's prime minister.

He said he wants the federal election held "as soon as possible".

Penny Wong was voted in unanimously to replace Mr Conroy as the party's Senate leader, with Jacinta Collins elected deputy Senate leader. The ABC reports the next treasurer will be Chris Bowen.

Deputy prime minister-elect Anthony Albanese said the new team would do "great things for the nation".

"And I believe we have this evening maximised our chances of going into a third term and beyond of a Labor government," he said.

Before that he was immigration minister and previously had been assistant treasurer to Mr Swan.

Mr Rudd's victory was virtually secured when right faction powerbroker Bill Shorten announced half an hour before the meeting that he had defected to the Rudd camp.

The ABC reports Mr Shorten played a pivotal role in the ouster of Mr Rudd and the rise of Ms Gillard three years ago - almost to the day.

Last week he said he would continue to support Ms Gillard and did not believe there would be a change of leaders.

"It is my personal conviction that the best interests of the Australian nation and the Labor party must come first, not debates about factions and personalities," Mr Shorten said.

"I believe that Kevin Rudd being elected tonight provides the best platform for Labor to be competitive at the next election."

Ms Gillard's leadership had come under sustained and intense pressure in recent days as entrenched poor polling pointed to an historic loss for the ALP at the September 14 election.

She has held the Victorian seat of Lalor since 1998 and was Australia's first female Prime Minister.

The following is one of Julia Gillard's best performances


I appreciated these comments by Austalian journalist Kerry-Anne Walsh on the significance of Julia Gillard and the future prospect for women in Australian politics.