Meanwhile, in this part of the world we are being told that everything's fine and business comnfidence has never been higher!

Europe strikes deal to push cost of bank failure on investors
The European Union agreed on Thursday to force investors and wealthy savers to share the costs of future bank failures, moving closer to drawing a line under years of taxpayer-funded bailouts that have prompted public outrage 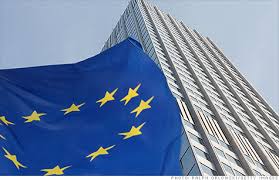 After seven hours of late-night talks, finance ministers from the bloc's 27 countries emerged with a blueprint to close or salvage banks in trouble. The plan stipulates that shareholders, bondholders and depositors with more than 100,000 euros ($132,000) should share the burden of saving a bank.

The deal is a boost for EU leaders, who meet later on Thursday in Brussels, and can show that they are finally getting to grips with the financial crisis that began in mid-2007 with the near collapse of Germany's IKB.

"For the first time, we agreed on a significant bail-in to shield taxpayers," said Dutch Finance Minister Jeroen Dijsselbloem, referring to the process in which shareholders and bondholders must bear the costs of restructuring first.

The rules break a taboo in Europe that savers should never lose their deposits, although countries will have some flexibility to decide when and how to impose losses on a failing bank's creditors.

"They can affect German savers just as well as they can affect any other investor in the world," German Finance Minister Wolfgang Schaeuble said after the meeting.

Taxpayers across much of Europe have had to pay for a series of deeply unpopular bank rescues since the financial crisis that spread across the bloc to threaten the future of the euro.

But a bailout of Cyprus in March that forced losses on depositors marked a harsher approach that can now, following Thursday's agreement, be replicated elsewhere.

French Finance Minister Pierre Moscovici signaled that ministers also agreed to French demands that the euro zone's rescue fund, the European Stability Mechanism, can be used to help banks in the 17-nation currency area that run into trouble.

"It makes the whole thing coherent," said Moscovici. "It creates a solidity for the system and a system of solidarity," he told reporters.

Under the rules, which would come into effect by 2018, countries would be obliged to distribute losses up to the equivalent of 8 percent of a bank's liabilities, with some leeway thereafter.

Europe can now focus on building the next pillar of a project to unify the supervision and support of banks in the euro zone, known as "banking union."

But thorny issues lie ahead, not least whether countries or a central European authority should have the final say in shutting or restructuring a bad bank.

The European Commission, the EU executive, is expected to unveil its proposal for a new agency to carry out this task of "executioner" as early as next week, officials said.

"The most important discussion has yet to start and that is how decisions on restructuring will be made," said Nicolas Veron, a financial expert at Brussels-based think tank Bruegel. "It's premature to say that Europe is getting its act together."

Many Europeans remain angry with bankers and the easy credit that helped create property bubbles in countries including Ireland and Spain, which then burst and plunged Europe into a recession from which it has yet to recover.

In the tapes published by an Irish newspaper, the collapsed Anglo Irish Bank's then-head of capital markets was asked how he had come up with a figure of 7 billion euros for a bank rescue, responding that he had "picked it out of my arse.

Unlike the United States, which moved swiftly to deal with its problem banks, Europe has been reluctant to close those whose credit is crucial to the economy and with which governments have close political ties.

This should change as soon as the European Central Bank takes over the supervision of euro zone banks from late next year, completing one pillar of banking union.

The ECB will run checks on banks under its watch. This new EU law on sharing losses could be used as the blueprint for closing or salvaging those banks it finds to be weak.

The second leg of banking union would be the resolution authority to shutter banks or restructure them. But the pace of progress depends in large part on Germany, which is reluctant to agree to such a move ahead of elections in September.

"Before the German Bundestag elections, Chancellor Angela Merkel will not agree to a far-reaching banking union," Austrian Chancellor Werner Faymann said in an interview.

Posted by seemorerocks at 11:39